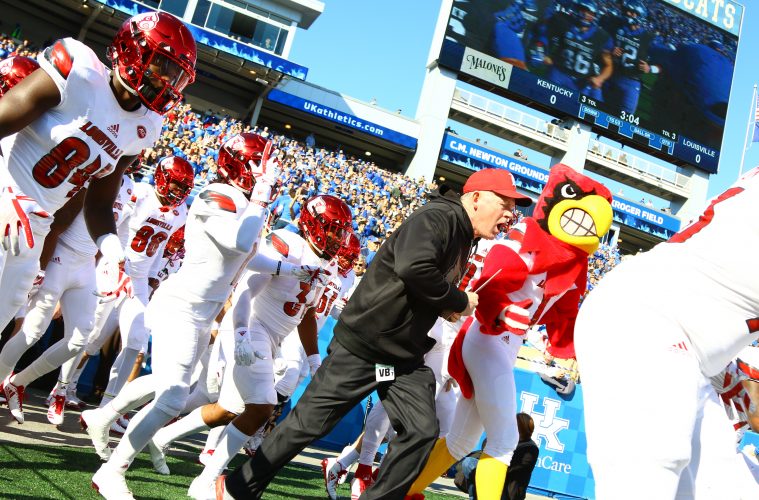 The University of Louisville football team accepted a bid to play in the TaxSlayer Gator Bowl and faces the Southeastern Conference’s Mississippi State on Dec. 30 in Jacksonville, Fla.

The Cardinals, making their eighth-consecutive appearance in a bowl game, are taking part in their second postseason contest in Jacksonville.

The game will be played on at noon at EverBank Field in and broadcast on ESPN. Originally known as the Gator Bowl, the TaxSlayer Bowl has been played continuously since the 1945 season, making it the sixth-oldest existing bowl game.

“Playing a bowl game in the state of Florida is a great reward for our players, staff and fans,” head coach Bobby Petrino said. “We have a large number of players from Florida so I know our players will be excited to make the trip. The TaxSlayer Bowl has a great tradition for being one of the best bowls, and I know our fans will be thrilled for another trip to the Sunshine State and playing an excellent Mississippi State team.”

This marks Louisville’s 22nd bowl appearance in school history, the eighth in the Petrino era. Overall, the Cardinals own a 10-10-1 overall record and are 3-4 under Petrino, splitting the last four postseason encounters. Louisville fell 29-9 to LSU last season in the Citrus Bowl.

“Accepting a bid to the TaxSlayer Bowl is a well-deserved honor and reward for our team and coaching staff,” interim Director of Athletics Vince Tyra said. “The team has won three-consecutive games and enters the postseason on a high note.

“The TaxSlayer Bowl has an outstanding tradition and our university is thrilled to be selected to this prestigious bowl. Our fans have always responded well in the postseason, especially games played in the state of Florida. I know our fans are excited for this opportunity and I fully expect them to be a major presence in Jacksonville.”

Louisville enters the TaxSlayer Bowl with an 8-4 record, winning three-consecutive games and four of the last five contests. Playing their best football of the season, the Cardinals are averaging 46.0 points per game over the last three contests and are averaging a 30.0 margin of victory during that span.

In the regular season finale, Louisville routed its rival Kentucky 44-17, retaking the Governor’s Cup for the fifth time in the last six meetings and posting its largest margin of victory in the series since 2006.

The Cardinals’ emergence has come in large part due to a ground game that is ranked 13th nationally entering the postseason, with an average of 249.9 yards per game. Louisville’s rushing attack averaged 351.7 yards per game in the last three contests.

Quarterback Lamar Jackson has led the surge in the rushing game, posting six consecutive 100-yard games and becoming the first player in school history to rush for over 1,300 yards in consecutive seasons. He leads the team with 1,443 yards and 17 touchdowns, while running backs Malik Williams and Reggie Bonnafon have totaled 518 and 446 yards, respectively, this season.

Louisville’s defense has improved during the winning steak, allowing an average of 233.3 yards of total offense and just 16.0 points per game. With the return of cornerback Jaire Alexander from injury, the Cardinals have yielded an average of 154.0 yards per game through the air and recorded five interceptions in the last three contests.

The Cardinals take on the Bulldogs for the first time since 1976, with the teams splitting the first four meetings. Mississippi State finished the regular season at 8-4 and 5-2 in the SEC after a 31-28 loss to rival Ole Miss.

Aeris Williams paces the Bulldogs’ offensive attack with 1,019 yards rushing and five touchdowns, while the MSU defense is one of the best in the country, allowing just 302.0 yards per game.

Louisville’s last appearance in Jacksonville for a bowl game came in the 2005 Gator Bowl, a 35-24 loss to Virginia Tech.

The Louisville Ticket Office is now accepting ticket requests for the TaxSlayer Bowl from both season-ticket holders and the general public. Fans should visit GoCards.com/Bowl for full information and requests can be submitted through My Cardinals Account.

Travel packages are available through Anthony Travel by visiting GoCardsTravel.com/bowl.

Fans are highly encouraged to request tickets through UofL Athletics, as institutional ticket purchases can impact future bowl opportunities. The priority deadline to request bowl tickets is Monday at 4 p.m.