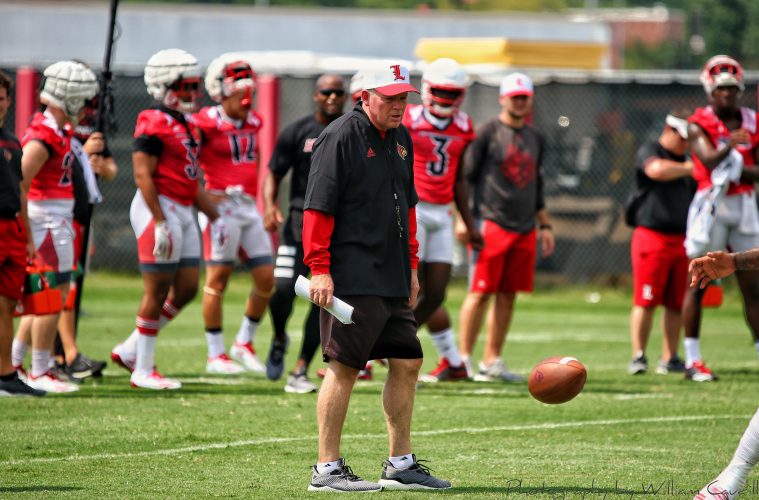 The University of Louisville football team held its first practice of the 2018 season Friday afternoon, wrapping up a two-hour practice session in shorts and helmets at the Howard Schnellenberger Football Complex.

The veterans, coming out in the afternoon, set the pace with an intense practice under sunny skies and high humidity.

Despite the difficult conditions, the Cardinals persevered through the first day without a hitch.

“It was a good first day,” defensive coordinator Brian VanGorder said. “We are trying to develop good work habits and we have high expectations for this football team. We are looking for guys who have good instincts and have a comfort for the game. It was good to be out there today.”

VanGorder, in his first season leading the defense, is adjusting to his new personnel and used this first practice to see what exactly he has to work with this season.

“We are still evaluating our talent,” VanGorder said. “We will keep looking for guys to step in. We are going to be in pads very soon and we will get a better idea of the direction we are headed in.”

One player who is anxious to get out on the field to impress his new coach is sophomore Rodjay Burns, who sat out last season after transferring from Ohio State. The former Trinity High product is excited to play and thinks this defense can show major improvement.

“I think we can be a lot better,” Burns said. “I feel like we are closer. We are more as a family. We are able to take coaching better. I think the sky is the limit. We just have to keep practicing and getting better.”

Losing all four starters in the secondary will not be an easy transition, but Burns thinks this new group might even be better despite breaking in an entirely new unit.

“I think we are a faster, taller and longer group,” Burns said. “I feel like we have great athletic ability back there and I’m excited with what we saw after day one.”

“I believe when we are a closer, more cohesive unit, it can make the team better, and that’s where I think we are in the secondary.”

Heading into the 2018 season, with only 10 seniors on the roster, the coaches and players are looking for leaders to step into new leadership roles, and one of those will be junior Jonathan Greenard.

The team’s leader in tackles for loss last season, Greenard has transformed his body to become a more explosive player, but he feels like he’s ready to take over as one of the team’s leaders.

“There are a lot of people picking up the leadership roles on this defense,” Greenard said. “I’m definitely taking on a bigger role with so many young players. I’m just trying to go out on the field and play as hard as possible and lead this team.”

The Cardinals return to the field on Saturday at 8:50 a.m. for day two of fall camp.