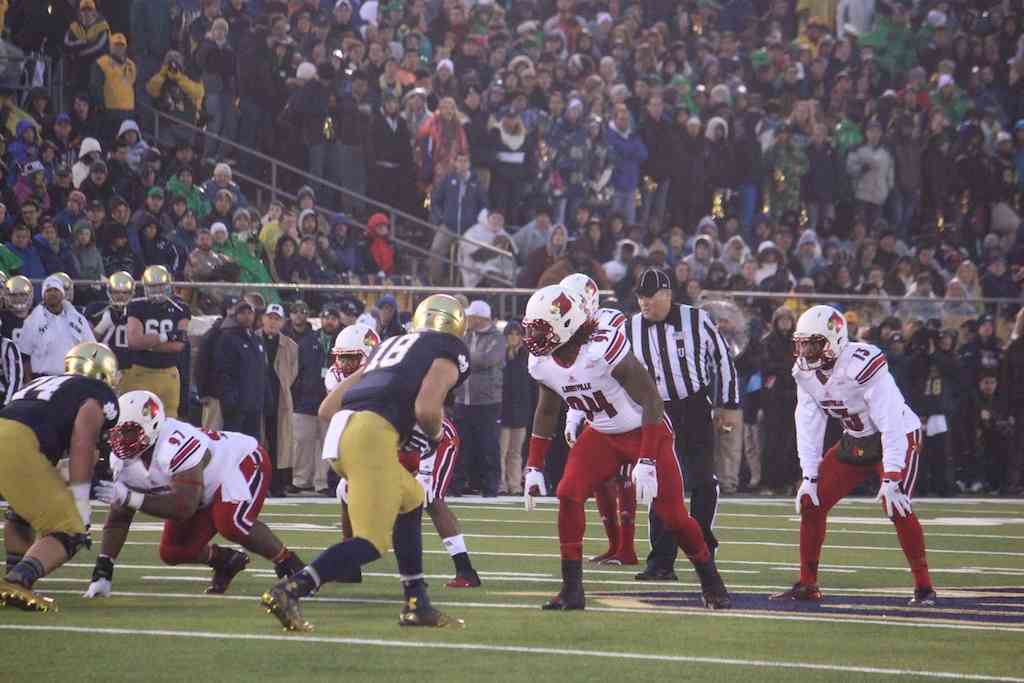 After a long, hard camp, the end is near for the University of Louisville football team.

With the season opener just four days away, the Cardinals are putting the finishing touches on preparation for the opener against No. 9 Notre Dame in front of an ESPN audience.

“We are getting there,” defensive coordinator Bryan Brown said. “We have to work out some kinks. Every time you start zeroing on an opponent you have to work on their base stuff, and some of the things they want to try to get you into.”

“Today was the first real work day and the guys flew around a bunch today. We just have to clean up somethingtomorrow.”

Facing a top-10 team in the nation, there are plenty of challenges facing the UofL defense that hopes to erase a tough 2018 season. One of those obstacles will be quarterback Ian Book, who took over the offense and led the Irish to a College Football Playoff appearance.

“Ian is a great passer and runner,” Brown said. “He’s a playoff quarterback. He’s good with his feet and he’s good with his arm. He does a great job keeping the chains moving. He’s a leader on that team especially being able to lead that team to the playoffs. I can tell right now he’s going to be a tremendous challenge for the defense.”

Sophomore linebacker Nick Okeke, who will likely get the start, has also been impressed with Notre Dame’s productive quarterback.

“I’ve been looking at Notre Dame since the spring since I knew we were playing them,” Okeke said. “The quarterback is a good player and we have to respect him. He’s making all the smart decisions.”

Notre Dame will have a big advantage on the offensive line against a smaller UofL defensive front, but the Tennessee

“I feel with our speed and athleticism that we can give them a good game,” Okeke said. “Physically upfront, we have toout smart them. We watch their tendencies on how they lineup and their pass sets to see if we can pick up anyadvantages.”

Not only are the players excited for the chance to hit a different colored helmet on Monday night, the coaching staff – which is making its Louisville debut – are just as hyped for the opportunity to take over the program this season.

“We’re excited for the challenge too,” Brown said. “We’ve been going against the same offense for the last 20-something days it gets kind of boring. However, now that we are coaching for something each and every day, each game is a challenge. We’re excited to get this first game underway this weekend. We’re just excited.”

Playing in front of a huge national television audience and what we be a raucous crowd at Cardinal Stadium, the players have are ready to experience the electricity of a Monday night game against one of the most iconic programs in the country.

“We talk about it,” Okeke said. “We know when Cardinal Stadium is filled up and ready to support us. We know theatmosphere is going to be huge, but we just have to stay poised and be ready.”