All 18 of the University of Louisville’s Atlantic Coast Conference men’s basketball games will be televised by national or regional networks as noted in the announcement of the conference schedule on Thursday.

Seven ACC teams are among ESPN’s early top 25 rankings.  Overall, the Cardinals will play as many as a dozen games against teams ranked in ESPN’s early top 25 ranking, including four of the top five and seven of the top nine.  Louisville opponents listed among those ESPN rankings include No. 1 Kentucky, No. 2 Kansas (a possible opponent in the NIT Season Tip-Off), No. 3 Duke, No. 5 Tennessee, No. 7 Virginia, No. 8 North Carolina, No. 9 Michigan State, No. 14 Virginia Tech, No. 16 Syracuse, No. 18 Florida State and No. 20 Clemson.

Louisville’s fifth season in the ACC includes two games each against North Carolina, Virginia, Boston College and Pittsburgh.  UofL will play four of its first seven conference games at home in January, beginning with Miami on Jan. 6 in the KFC Yum! Center (televised by ESPNU).

UofL travels to Pittsburgh for its first ACC road game on Jan. 9 (Raycom Sports), followed by a visit to North Carolina on Jan. 12 in a game televised by ESPN or ESPN2.  The Cardinals finish the month of January against Boston College on Jan. 16 (RSN), at Georgia Tech on Jan. 19, vs. NC State on Jan. 24, vs. Pittsburgh on Jan. 26 and Jan. 30 at Wake Forest, with the latter four televised by Raycom Sports.

Eight of the Cardinals’ last 10 ACC games are against teams ranked in ESPN’s top 25.  North Carolina comes to the KFC Yum! Center on Feb. 2 (ESPN or ESPN2) to open the month of February for the Cardinals, followed by a pair of road games at Virginia Tech on Feb. 4 on ESPN’s Big Monday, and Feb. 9 at Florida State (ESPN, ESPN2 or ESPNU).  Next, UofL has a pair of home games against Duke on Feb. 12 (ESPN or ESPN2) and Clemson on Feb. 16 (ESPN, ESPN2 or ESPNU).

Notre Dame provides the opposition for the final home game of the season on March 3 in a game televised by CBS.  The Cardinals will close the regular season against Virginia for the fourth time in the last five years, facing the Cavaliers in Charlottesville, Va., on March 9 (ESPN or ESPN2).  The 2019 ACC Tournament will be staged March 12-16 at the Spectrum Center in Charlotte, N.C.

Louisville has faced a schedule ranked among the top 16 toughest by the ratings percentage index in nine of the past 11 seasons, including the nation’s 10th-toughest last year.

This season, UofL will play a dozen games on Saturday, eight on Wednesday, three each on Tuesday and Friday, two each on Sunday and Thursday, and once on Monday.  UofL will play one game over a 15-day period in late December and early January.  The Cardinals had previously announced the non-conference portion of their schedule on Aug. 23.

Tipoff times and television assignments for the balance of the schedule will be announced later. 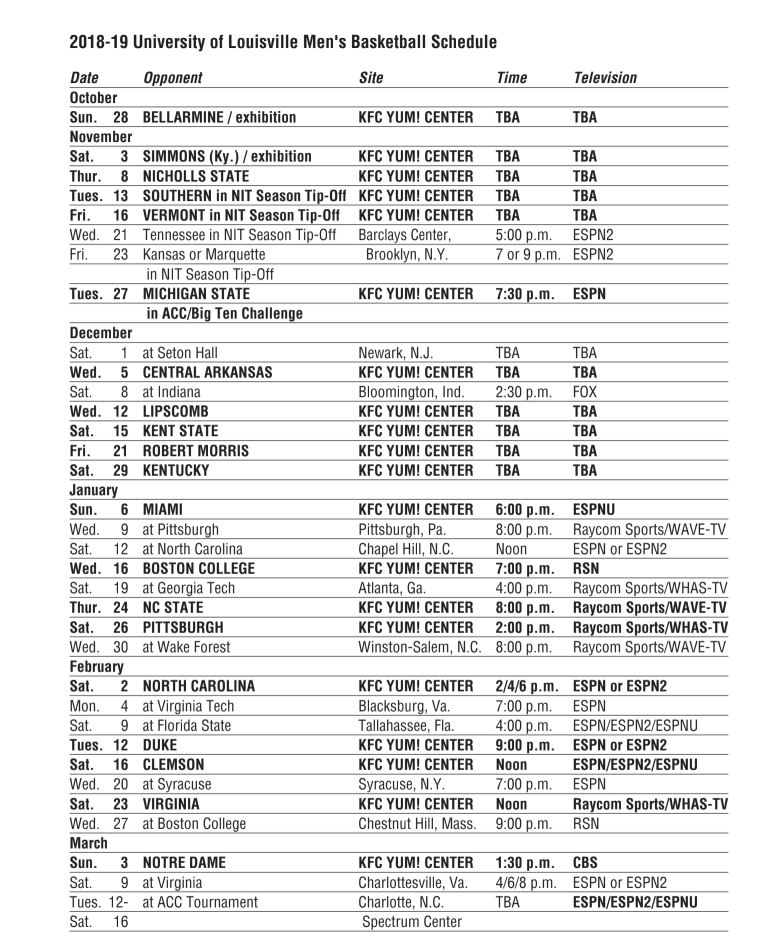