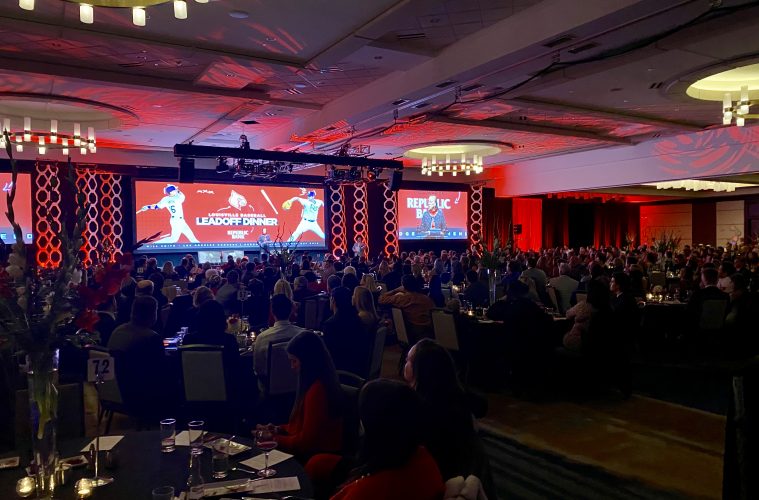 ‘Twas the night of the Lead Off Dinner, I sat in my chair, knowing Sean Moth would soon be there. I’m going to stop myself there so I can keep you from having to suffer through my attempt at rhyming and making any sense. Just know that as I’m writing this, I am also reliving my night at the Marriott. It was well organized with beautiful centerpieces, a staff who operated like a well oiled machine, and simply stated, elegant. But you don’t care about any of that. What you’re here to read about is what you missed out on at this year’s Lead Off Dinner. Let’s get to it.

The greatest of all time, Sean Moth, kicked things off by introducing the 2020 Cardinals. I’ve spent months thinking about how much talent was being brought back this season and how great that was going to be. It was in this moment, when Sean began to introduce the Freshman class, that it really hit me just how deep this roster is. Folks, I kid you not when I say that I am completely confident this is one of the best teams Dan McDonnell has ever had at Louisville. The senior class alone consists of some of the most exciting players to ever wear a Cardinal uniform. Justin Lavey, Adam Elliott, Danny Oriente, and Luke Smith are destined to lead this team through another successful season. Let’s not forget about the sophomores and juniors who are bringing back strong hitting and pitching to this squad. Reid Detmers alone will cause problems for any opponent coming our way, but when you throw in guys like Alex Binelas and Cameron Masterman, you start to realize why this team is a preseason #1.

After introducing this years squad, Sean had the pleasure of introducing a UofL hero. In a sleek red suit jacket, Vince Tyra took the stage to greet all of those in the room and thank them for supporting UofL athletics. He pointed out how successful the fall teams were, how wonderful it was to see the baseball team reach the final four of the College World Series last season, and made sure to remind us all that his favorite position in baseball was pitching. But none of these things are what made the room gasp and gaze at the giant screens to his left and right in awe. However, what he did share with us that caused this reaction was a video of the left field parking lot. At first I thought that we were finally getting our wish granted. They were finally going to pave the parking lot and I wouldn’t have to choke on gravel dust walking to my car. No my friends, that is absolutely not what they have planned. Instead, there is the dream of building a stunning indoor facility in place of the left field parking lot. As of right now they are searching for sponsors to help pay for the facility, meaning it remains a dream until they have the money. Let me be the first to say that I do not care. What I mean is that I am too excited about this addition to care that it is only a dream at this point. They’ll eventually get the money to make this dream a reality and when they do, it will take Jim Patterson Stadium to a new level.

Speaking of taking things to a new level, Julie McDonnell (wife of Dan) took all of our emotions to a new level when she came to the stage to speak about Home Runs For Hope. This is a program dedicated to supporting Gildas Club, a place where people who are impacted by cancer can come and find a home away from home. The video board behind Julie displayed a list of names of those within the Louisville Baseball program that have been impacted by cancer in some way. There were thirty names on this list and included everyone from players to coaches. If you do anything for the community this year, let it be supporting Home Runs For Hope. You can pledge any dollar amount per home run and all of the proceeds are donated to Gildas Club. To find out more information about this program click here.

Emotions remained elevated for some in the room when Lonnie Ali walked to the stage and gave a heartfelt speech about her late husband and his selflessness and leadership. Through her words you quickly learned how much the Muhammad Ali Leadership Scholarship means to her and her family. Every year this scholarship is awarded to a team member who is in good academic standing, active within the Cards Care outreach program, and demonstrates exemplary leadership qualities on and off the field. This year, that scholarship was awarded to senior Adam Elliott. Congratulations to not only Adam for receiving such a coveted scholarship, but also to his parents, Lori and David. This moment was just as much yours to enjoy as it was Adam’s. All of your hard work as parents truly came to light and we are thankful to have such an upstanding young man on our baseball team.

The proud moments did not end there. With a room full of former, current, and future players and families, Coach McDonnell took the stage to list accomplishment after accomplishment for his student-athletes. Everything from stating that for the last eight years his team’s have averaged at least a 3.0 or higher G.P.A. To listing all 15 players who have made their MLB debut since 2014. But what he was really up there to tell us is that they’re not finished yet. The team message this year is “somewhat higher” and they are ready to fight for everything they deserve to go somewhat higher.

Two former players, who know all about going somewhat higher, took the stage with Sean Moth to end the night. Skipping over the introductions where Sean discussed accolades given to both players and pointed out that there was not enough time to read all of Brendan’s, we moved on to the good questions. We knew that the answer to their favorite moments as Cardinals would be 2014 for Will and 2017 for Brendan. What I wasn’t execting were the horror stories of minor league baseball. Thankfully they are both able to shower in the clubhouse these days. They also both got to relived the moments they received their calls for the majors and what the nerves were like the night of their first start. I believe my favorite comment of the night came from Brendan McKay. When asked who he was most afraid to face while pitching he gave an answer that any Cardinal baseball fan could appreciate, Nick Solak. Brendan stated that he threw everything he had at Nick that night.

The Cardinal Nine will start their season with a weekend series at Ole Miss February 14-16 before coming home to face Wright State on February 19. Season tickets are still available and can be purchased by clicking here.