UofL is the #3 Overall Seed in the NCAA Baseball Tournament that starts this week.  The #3 overall is the 2nd National Seed in school history for Louisville. The Cards will host starting with #4 Morehead State on Friday at 6:00 p.m. Also in the Louisville Regional are #3 Michigan and #2 Bradley.

Kyle Funkhouser will start things off for the Cards on the hill versus the hot-hitting Morehead State Eagles. The winner of UofL vs. MSU will play the winner of the Michigan vs. Bradley match-up (2:00 p.m. Friday) with the losers playing an elimination game.

TICKETS CAN BE PURCHASED HERE

The Louisville Regional will be matched-up with the Fullerton Regional in the Super Regional with the winners facing off in the Best of 3. Cal State Fullerton, Arizona State, Clemson, and Pepperdine. 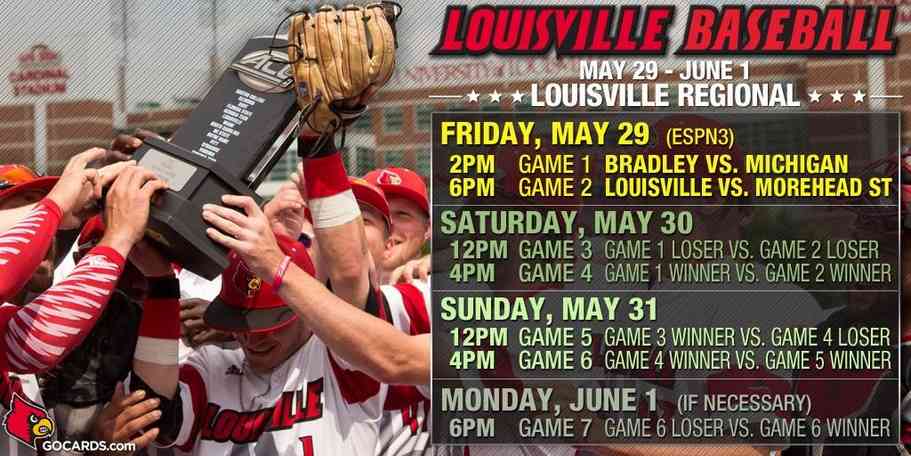 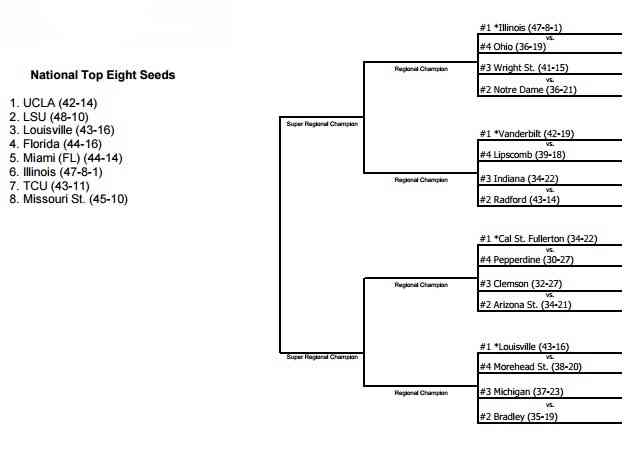 LOUISVILLE, Ky. – The Louisville baseball team was chosen as the No. 3 national seed for the 2015 NCAA Championship and will serve as the top seed for the Louisville Regional. The Cardinals will be joined on May 29-June at Jim Patterson Stadium by No. 2 regional seed Bradley (35-19), No. 3 Michigan (37-23) and No. 4 Morehead State (38-20).

Fans are encouraged to purchase and pick up tickets in advance or print their tickets at home to avoid long will call lines on game day. Tickets can be picked up at the Louisville Cardinals Ticket Office, located at Gate 2 of Papa John’s Cardinal Stadium. No tickets will be mailed. Single session tickets, including reserved chairback and general admission berm seating, will go on sale Thursday, May 28 at 9 a.m., ET online at GoCards.com or at Papa John’s Cardinal Stadium Ticket Office. Tickets will also be available at Jim Patterson Stadium starting on Friday, May 29 at noon ET.

Along with the 2015 NCAA Regional, Louisville also hosted the regional round of the NCAA Championship in 2009, 2010, 2013 and 2014 while also hosting NCAA Super Regional series in 2007 and 2014. Overall, this will mark the Cardinals’ eighth NCAA postseason berth in the last nine seasons and the program’s ninth NCAA appearance overall.

In its inaugural season in the Atlantic Coast Conference, Louisville dominated the Atlantic Division in record-setting fashion with a 25-5 mark. For the Cardinals, it was their fourth straight regular season conference championship, including each of the last three in different leagues.

Louisville has already earned its fourth straight 40-win season and the eighth in nine years under the direction of McDonnell. The Cardinals have finished with 40 or more regular season wins in three straight seasons and five times in the last seven seasons overall.

The Cardinals were 25-6 at home this season and own a 273-88 record (.756 winning percentage) all-time at the ballpark, which opened in April 2005. Louisville has won eight straight NCAA postseason games at Jim Patterson Stadium and is 15-4 all-time in regional and super regional games at the ballpark.

All times are Eastern Daylight Savings