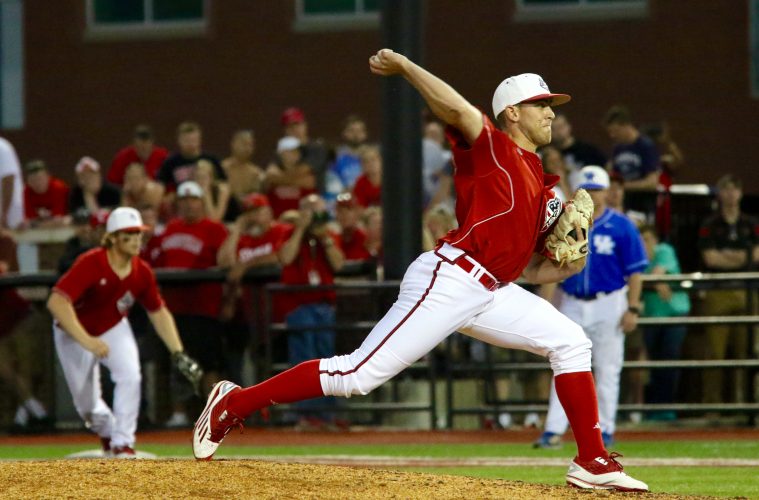 Kade McClure Shines with 11 Ks in Game 1 of the ACC Tournament; Cards Win 9-5

Kade McClure had a career-high 11 strikeouts while Will Smith homered twice and drove in five runs as the third-ranked Louisville baseball team opened the 2016 ACC Championship with an 8-2 victory over Wake Forest on Wednesday night at Durham Bulls Athletic Park.

The second-seeded Cardinals (47-10) registered season highs in with 17 strikeouts on the mound and four home runs at the plate as they extended their winning streak to 10 games. In four games against the Demon Deacons (33-24), all in the last seven days, Louisville connected for nine home runs, the most for the Cardinals against any opponent this season.

A righthander from Mentor, Ohio, McClure allowed two runs on four hits and retired the final 11 batters he faced to improve to 12-0 on the season. The sophomore won for the 12th time in his 13 starts becoming the nation’s second 12-game winner this season. The 11 strikeouts bested his previous high of 10 set in last Tuesday’s victory against Indiana.

Smith, a junior catcher from Louisville, finished 2-for-4 overall while connecting for his second two-homer game of the season having also accomplished the feat against Eastern Kentucky onFeb. 23. With Wednesday’s performance, Smith has seven home runs on the season to go with 40 RBI and a .373 batting average in 40 starts.

Junior Nick Solak added a home run and two RBI, while sophomore Blake Tiberi also homered and drove in two runs as the Cardinals finished with an 11-8 edge in hits. Junior Corey Ray chipped in with single, walked twice and scored two runs.

The Demon Deacons started fast Wednesday scoring two runs in the first inning on a RBI double by Stuart Fairchild and a RBI single from Will Craig. Jonathan Pryor led off the game with a single to center and moved to second on a wild pitch from McClure before scoring on Fairchild’s 20th double of the season. Craig followed with a single to center for the 2-0 advantage.

The Cardinals answered in the bottom of the first inning by cutting the deficit in half when junior Corey Ray scored on a RBI sacrifice fly to left center by Solak. Ray led off the inning with single up the middle, advanced to second with his 38th stolen base of the season and moved to third on a groundout before scoring the first of his two runs in the game.

As McClure settled into a rhythm and kept the Demon Deacons at bay, Louisville gained its first lead of the night in the fourth inning on a two-out, two-run homer off the bat of Tiberi. Following a two-out single by sophomore Devin Hairston, Tiberi sent a 1-1 offering from righty John McCarren over the right field wall for his eighth home run of the season and a 3-2 advantage.

The Cardinals padded their lead in the fifth inning on back-to-back home runs from Smith and Solak. After a leadoff single by junior Colin Lyman and a one-out walk to Ray, the Demon Deacons brought in righty Chris Farish, who Smith greeted by crushing the first pitch of the at-bat over the wall in left center for his first round-tripper of the night. Solak followed by launching a 2-0 pitch over the bull atop of the 32-foot wall in left field for his fourth homer of the season and a 7-2 lead.

The margin increased to 8-2 in the sixth inning on a RBI sacrifice fly to left by Smith to score Lyman, who started things with a one-out walk. After taking second with his eighth stolen base of the season, Lyman moved to third on a single by junior Logan Taylor before Smith’s flyout to the track in left sent him home.

Wake Forest cut the margin in half with a trio of runs in the eighth inning on a two-run single by Ben Breazeale and a RBI single by Johnny Aiello. The Demon Deacons had a chance for more on a single to left by Joey Rodriguez, but sophomore Ryan Summers made a perfect throw home, where Smith tagged Breazeale for the final out of the inning. Summers also added a diving catch in the ninth inning for a pair of impressive defensive plays in the game.

Smith ended the hopes of a Wake Forest comeback in the bottom of the eighth with his second home run of the night belting a 3-1 pitch from Drew Loepprich over the wall in left center for a solo home run and the 9-5 margin. Junior righty Zack Burdi worked a scoreless ninth inning ringing up two strikeouts to close the victory.

The No. 3 Cardinals will have a day off from competition before resuming Pool B action against 12th-ranked and sixth-seeded Clemson on Friday at 11 a.m., ET at Durham Bulls Athletic Park.