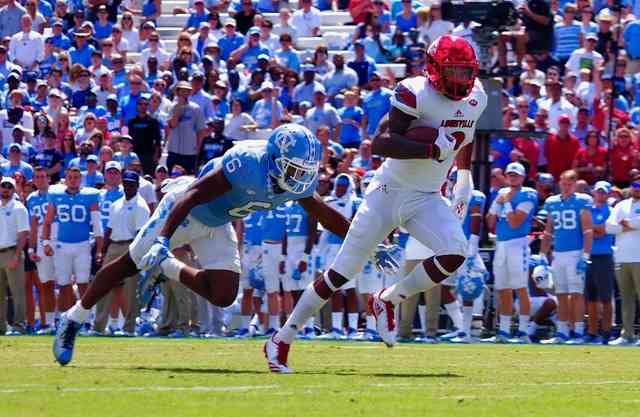 Seeing University of Louisville wide receiver Jaylen Smith out on the practice field was a sight for sore eyes.

After having an appendectomy on Aug. 3 — the day camp started — the team’s top pass catcher from a year ago was back on the field Tuesday in hopes to get back on the field for the Sept. 1 opener versus Alabama.

“It felt good,” Smith said. “I felt slightly winded early on in practice, but the more practice went on I began to get back in football shape. It felt good to be out there running around.”

Head coach Bobby Petrino had one of the biggest smiles on the practice field on Tuesday, seeing his star wide receiver take the field for the first time this fall with the first unit.

“I forgot how much we missed Jaylen,” Petrino said.  “He was out there and did a lot. He looked good and he said he felt good. He’s full-go, but non-contact. We aren’t ready to tackle him yet, but we will see how the week progresses.”

With Smith’s massive production from a year ago, it’s easy to see much how different the offense looked without one of the team’s most productive returning starters on the field.

Despite missing three games with a wrist injury, Smith was the team’s leading receiver last season – catching 60 passes and narrowly missing a 1,000-yard season, with 980 yards and seven touchdowns.

Smith is one of the most productive wide receivers in school history, totaling 116 receptions for 1,955 yards and 14 touchdowns in 36 career games. While he has caught a little over 100 passes, he gets the most out of his receptions, as the senior averages a healthy 16.9 yards a reception, which ranks in the top 10 in school history.

Despite missing over two weeks of camp, Petrino thinks the first-team all-ACC performer will line up at wide out when the Cardinals take on the defending champs in Orlando, Fla.

“I feel good about him for Alabama,” Petrino said. “The way he looked out there today and he’s a veteran. He understands the offense and didn’t miss any assignments. That’s one of Jaylen’s strengths, how much he knows about the game of football. He just jumped right in and took off.”

Smith echoed his coach’s comments, stating that he will be ready for the Crimson Tide.

“I don’t have any doubts that I will be ready to go, especially after how I felt today,” Smith said. “We have 11 more days before game day, so I think I will be perfectly fine.”

While Smith hasn’t had much physical conditioning over the last few weeks since being injured, the 6-foot-4, 223-pounder feels like he will be in game shape in the next two days with a couple more days of practice under his belt.

“I think I will be ready by Friday of this week,” Smith said. “I will be running continuous reps and back-to-back deep plays to get myself in shape. I know I will be ready to go in the next few days.”