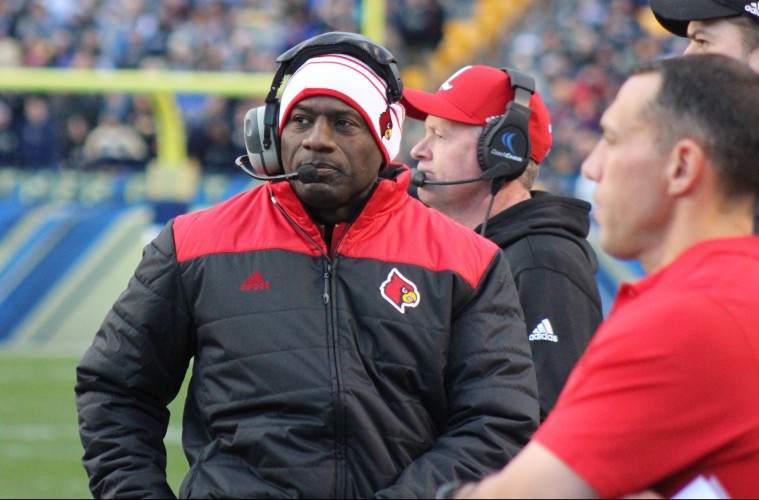 How will Bobby Petrino & Todd Grantham fill the void of departed Safeties Greg Brown who recently accepted the same position at Missouri?

As specified in Rule 11.7.2 Louisville can only have 1 head coach, 9 assistant coaches and 2 graduate assistants.

There is a rumor out there that Terrell Buckley will interview with Mississippi State this week for the Safety Coach job with the Bulldogs.  Miss State recently lost its D-Coordinator (Manny Diaz) to Miami and the prevailing thought is that Dan Mullen will replace its Defensive Coordinator and then its Safeties coach.   Buckley is a natural fit for Mississippi State given that he is from the area and has successfully recruited the area for the Cards

There are TWO important dates:  (1) Official Visits can resume on January 15. (2) The Annual AFCA Coaches Convention (which was held last year in Louisville) is in San Antonio from January 10- January 13.  The convention is a heavy time for interviews and “meet & greets”.

Bobby Petrino could elect to elevate Terrell Buckley to “Secondary Coach” rather than just Cornerbacks coach.  He’s done it before with Willy Robinson at Arkansas.  By ‘promoting’ Buckley, Grantham & Petrino could justify a pay increase while retaining a solid coach and fantastic recruiter.  It’s hard to say if offered whether or not T-Buck could resist a move back home.

If Buckley did elect to accept the Secondary job, it could open up the opportunity for Louisville to hire a Tight Ends Coach which is how Petrino had his staff assembled at Arkansas.

If Buckley remains at UofL let’s assume that he’ll be the Secondary Coach & Petrino will be going after a Tight End Coach. But if T-Buck doesn’t stay with the Cards, Louisville is going to have to replace two assistants.

It will be interesting to see if Petrino elects to go with either:

So who would be the likely candidates?  I’d probably put Scott Lakatos at the top of the list.  Lakatos was with Todd Grantham at Georgia for the entirety of Grantham’s tenure and resigned for ‘personal reasons’ to return to his home state of New Jersey where he currently coaches the defensive backs at Monmouth.  It’s unclear why Lakatos left Georgia and if those ‘personal reasons’ are now resolved, but Lakatos and Grantham have had a great deal of success together and Scott is familiar with Grantham’s system.

The other Defensive Back coaches who have worked with Grantham as the boss are Mel Tucker, the current Defensive Backs Coach at Alabama (unlikely to leave) and Cory Undlin who is the Defensive Backs Coach with the Philadelphia Eagles.  Undlin may be looking for work after Chip Kelly’s dismissal from the Eagles, but Undlin has spent his entire career in the NFL and won’t have trouble finding another job in the league.

Bobby Petrino has some say in this too.  It would be FANTASTIC to get the band back together and hire Joe Whitt, Jr who is currently the Cornerbacks coach with the Green Bay Packers.  Whitt was with Petrino during his 1st stint at Louisville and left the Cards with Bobby to go to the Atlanta Falcons.  Whitt has been in Green Bay since 2008 and probably isn’t coming back to college.

Someone who may be willing to come back to college is former UofL Safety and current Minnesota Vikings Assistant Defensive Backs/Defensive Quality Control Coach Jon Gannon.  Gannon had his playing career cut short at UofL with a hip injury and has since spent his time coaching and scouting, including a 2-year stint in the same role with the Tennessee Titans and as a scout for the St. Louis Rams.

Petrino could elect to go back to the well that is Mike Cassity.  Cassity has been with Petrino several different times and is currently with Jeff Brohm at Western Kentucky.

An off the radar candidate would be Tony Levine, former Houston Head Coach who spent a year away from football.  The Cougars had a fantastic season (they beat FSU in the Peach Bowl) with a team built by Tony Levine.  Levine was with Petrino at Louisville from 2003-2005 before leaving for the Carolina Panthers.  Tony has never coached in the secondary so this one is a stretch….sometimes though you just have to find a spot for good coaches.

Todd Grantham & Bobby Petrino both have an extensive Rolodex however, so don’t be surprised if the new coach isn’t named here.

It’s too early to tell if Petrino will go this route and bring in a tight ends coach or not.  Our choice would be to bring back Pete Nochta once healthy from his battle from lymphoma.  But another Louisville tight end that could be in the mix is Richard Owens who worked for Petrino at Arkansas and Garrick McGee at UAB.

Chip Long just took the Offensive Coordinator Job at Memphis from Arizona State formerly coached Tight Ends with Bobby Petrino at Arkansas.  Tim Horton at Auburn could also be in play because of his ability to coordinate recruiting.  But Horton has typically also coached running backs in addition to Tight Ends (like Greg Nord) and isn’t someone I think is possible here.

Speaking of Greg Nord, why not give him a call and see if he wants to come home? He’s currently with Jim McElwain at Florida.