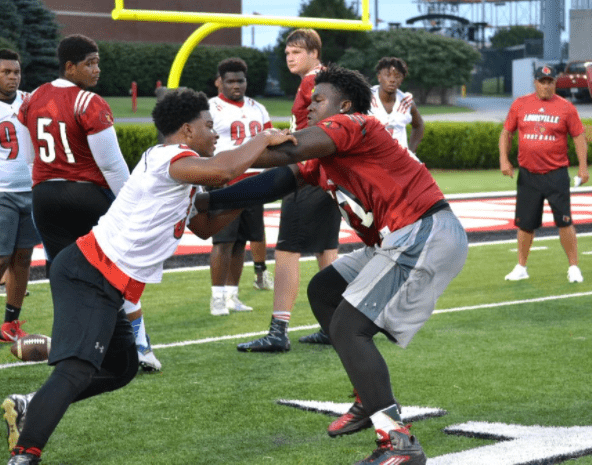 Cordavien Suggs is a highly touted 2017 offensive tackle from Duncan U. Fletcher in Neptune Florida.  He has been committed to Mississippi State since July of 2016 but as national signing day approaches he is still weighing his options and plans to visit the University of South Florida on January 13th, Mississippi State on January 20th, and Louisville on January 27th.

I caught up with Suggs and asked him to give the Crunch Zone the latest on his recruiting status.

“I’m a Mississippi native so that played a big roll (in committing to Mississippi State) and I love how their playing style and I think it fits my game.  That said, I love Louisville too and they’re my number two school right now.  I feel like I can play early there.  I also feel I can play early at USF.  I just need to get a better feel for both of them (UofL and USF),” said Suggs.  “And yes they both have a chance.”

Suggs is being recruited by running backs coach Kolby Smith, who recruits players from Florida for Lousville.  He said that Louisville has a great football program and their offense compliments his playing style.  Back in July before he committed to MSU he attend Light up the ‘Ville so this will be the second visit for the talent tackle.

Suggs has a very well rounded technique as both a pass blocker and a run blocker, which is surprising considering he just started playing football his Junior year. He does a good job of using his feet to get into position in pass protection, utilizing a good punch and staying inside his defender.  Many high school lineman extend their arms and show lazy foot work, this allows for defenders to swat the lineman’s hands away or bend around the edge on the pass rush to get at the quarterback.  Such is not the case with Suggs, you have to get his hands off you and go through his body most of the time.  He was a basketball player growing up And still plays for Fletcher.  You can tell his experience on the hardwood helps him on the gridiron in the way he slides his feet like a wingman defending on the perimeter.

Louisville fans should be on the look out for how Suggs rates his visits.  He will visit USF first then Mississippi State.  The fact that he visits Louisville after he goes to Mississippi State may be a blessing or a curse.  If the Mississippi State visit blows him away, he could possibly shut down his recruitment.  On the other hand, if he does visit Louisville after the MSU visit the ‘Cards may be the last school to make an impression on him before national signing day which falls on February 1st, 2017.