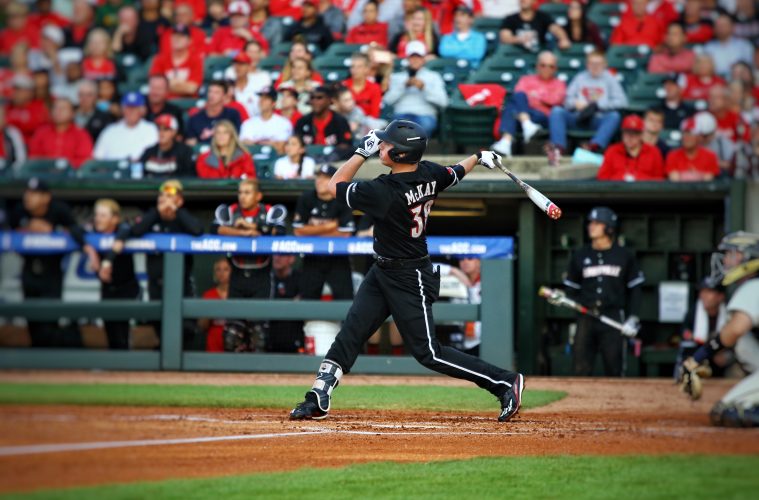 TheCrunchZone.com’s William Caudill was all around the stadium shooting photos of Louisville’s 10-3 win over the Notre Dame Fighting Irish in Pool A of the 2017 ACC Tournament.

Brendan McKay connected for a grand slam at the plate and twirled six quality innings on the mound as the top-seeded and fourth-ranked Louisville baseball team opened the 2017 ACC Championship with a 10-3 victory over Notre Dame on Thursday night at Louisville Slugger Field.

McKay added two walks to go with his second career grand slam for the Cardinals (47-9), who moved to 1-0 in Pool A of the ACC Championship. The junior lefthander added eight strikeouts while allowing three runs on seven hits in his six-inning start to move to 9-3 on the season and 30-10 in his collegiate career. Thursday’s performance marked the 27th time in his collegiate career McKay has struck out eight or more in a single game.

Junior outfielder Josh Stowers had a career-high for hits finishing 4-for-5 with a double, one RBI and three runs scored. Junior infielder Drew Ellis added a solo home run and a RBI sacrifice fly, while junior shortstop Devin Hairston chipped in with a single and three RBI for Louisville, which will conclude pool play against Florida State on Friday at 3 p.m., ET. The winner of the Cardinals-Seminoles matchup will win Pool A and advance to Saturday’s semifinal round.

Following the six innings of work from McKay, freshman lefthander Adam Elliott pitched two shutout innings of relief before freshman righthander Shay Smiddy worked a scoreless ninth inning to close the victory. The Cardinals moved to 4-0 on the season against Notre Dame (26-32) and have won 13 straight in the series with the Fighting Irish.

Louisville opened the scoring Thursday in the second inning when Ellis launched the first pitch from Michael Hearne over the wall in left center for a solo home run and a 1-0 lead. The homer was the 17th of the season for Ellis, including the third in two games this season at Louisville Slugger Field. Hearne went on to take the loss for Notre Dame and drop to 4-5 on the season after allowing five runs on four hits in five innings.

The Cardinals extended the advantage to 5-0 in the third inning on a two-out grand slam from McKay. After Logan Taylor walked, Stowers reached on an infield single and Hairston was hit by a pitch, McKay powered the first offering from Hearne over the right field wall for his 16th home run of the season.

The Fighting Irish cut into the margin in the bottom of the third after a two-out, two-run double down the left field line by Matt Vierling scored Nick Podkul and Jake Johnson narrowing the Louisville lead to 5-2. Notre Dame edged closer with a run in the fifth inning when Vierling scored from third on a wild pitch.

The Cardinals answered in the seventh inning with a two-out, two-run single by Hairston to send Taylor and Stowers home. Following back-to-back singles from Taylor and Stowers, and a throwing error by the Fighting Irish, Hairston delivered a hit through the left side to extend the lead to 7-3. Louisville added its final three runs of the game in the ninth inning on a RBI double from Stowers and RBI sacrifice flies by Hairston and Ellis.