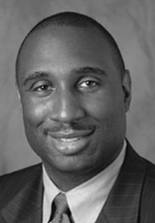 In 1988 Derwin Webb made the short trip down I-65 from Indianapolis to the University of Louisville.  A high school phenom from perennial power Lawrence North, Webb was an Indiana All-Star basketball player and a state long jump champion.  Now, Webb is now planning to make another jump; from practicing attorney to District Court Judge.  I sat down with Webb to discuss his run for office, his playing days at U of L, and life in general.

After a successful high school career at Lawrence North, Webb was heavily recruited to play basketball.  The man charged with bringing Webb to the Cardinals program was Bobby Dotson.  Webb, eventually arrived, but it was not without a brief detour.  Webb was a huge Iowa State fan.  More importantly, he was a Johnny Orr fan.  So when the recruitment heated up, and Iowa State offered, Webb agreed to play for the Cyclones.  After one official visit, and a nine hour car ride, Webb’s mother looked at him and said; “Are you SURE you want to go this far away?”  Louisville, was back in the game and the Cyclones missed their man.

Upon arrival, Webb quickly took stock of his surroundings and realized that given the talent that was in front of him on the depth chart, he would be better served to red shirt.  That year’s team finished the regular season and headed to the NCAA tournament where they were eventually up-ended in the sweet sixteen by Oklahoma.  Webb would play on other teams at U of L, he would enjoy success, and he would taste failure, but the lessons he learned while a Cardinal were lessons he still relies on today.

Webb played in an era where players weren’t defined by their number on the floor.  Denny Crum teams historically didn’t have a “one” or a “two” they just had guards.  Typically, the guards Crum’s teams employed were bigger than the other team’s guards.  When pressed for his position, Webb says that he was a natural “three” in today’s game.  However, he quickly pointed out that when playing for Coach Crum, he found himself in the point guard role, the shooting guard role and any other role the hall of fame coach asked him to play.  Webb recalled that lessons Coach Crum taught him during his playing days are still lessons he holds onto today.  “Things like, ‘go fast, but don’t hurry’ and ‘failing to prepare is preparing to fail’ are phrases Coach told us regularly.”  One lesson that Crum taught Webb was that sometimes you work your hardest, and you still lose.  While Webb readily admits this was a lesson that has served him well, he had one caveat; “Yeah, but I still hate to lose.”

After graduation from U of L, Webb enrolled in the University of Louisville Brandeis School of Law.  He clerked for the prestigious law firm Stites and Harbison while in undergrad, and was a summer associate during his first two years of law school.  Upon graduation, Webb began working for the powerhouse firm and jokingly admits that because of his long tenure, even before graduation, he was the only first year associate that was eligible to be made partner.

While working for Stites was professionally rewarding, Webb didn’t make it a permanent home.  After a couple of years, Webb was offered, and accepted a position working within the University of Louisville’s Athletic Department with duties that focused on Compliance and Diversity.  Webb worked in several capacities prior to the launch of Webb Law Offices, but most of his roles focused on his legal ability and his passion for bringing diversity to large organizations. In 2004 Webb left the corporate world and began Webb Law Offices.  A solo practice, Webb concentrates the majority of his attention on criminal defense and family law matters in Kentucky.  For the last year and a half or so, Webb has also taken on the role of a part-time public defender in Southern Indiana, an assistant basketball coach for Christian Academy, and a single father of three, with custody of a fourth child.  So I asked the obvious question; “why would you want to be a judge?”

When asked, Webb is reflective.  The pause is not posturing, it is not contrived, Webb says that he had been approached about the idea of running for judge several years ago.  It was not until recently though that he gave running for office serious consideration.  “First, I had to pray about it” Webb said.  I have learned that for major decisions such as this, I need God’s direction.  Once I felt good about that, I was ready to run.”  Webb will tell you that the run for District Court Judge adds an interesting flavor to an already busy day.  Between morning court in Jefferson County, afternoon court in Southern Indiana, basketball practice, parenting obligations and running for office, he barely finds time to pause.  It is during these times that Webb relies on the training he received on the court from Coach Crum.  “Coach Crum instilled many things in his players, ‘be on time, pay attention to details, work hard and be ready to make changes on the fly when things aren’t working’ were all things that he taught us.”  These are all life lessons that have served Webb throughout his career, but are especially important for his current campaign.

Although busy, Webb is still an avid follower of this year’s Cardinal team.  He plans on attending the first practice since he graduated from U of L this week.  He travelled to Atlanta last year to watch the semi-finals against Wichita State, but had to be back in court on Monday for a hearing.  Webb says that the judge was agreeable to allowing a continuance so he could attend the championship game if Webb could get the opposing attorney to agree.  “I found her,(the opposing attorney) asked her if we could move the hearing, and she said no.  I later found out she was a UK fan” Webb said laughing.  When asked who was the most talented player he ever played with, Webb said I have two; one is LaBradford Smith, and the other is Jerome Harmon.”  “Both of those guys were amazing athletes. Unfortunately, we only had Jerome for one year.  If he had played three or four years, I think the program would have had different results.”

There have been many challenges for Derwin Webb.  He has had many successes and expects that he will have his share of both success and failure in the future.  We all will.  The thing I took away from my meeting with Derwin was that he was most proud of his accomplishments given his background.  Webb said “You know, put all this to the side, my being African-American, my playing career at U of L, all of that.  I am the first person in my family who not only went to law school, but I am the first one to graduate college.”  “The first time my grandfather sat foot on a college campus was when he came to drop me off.”  “It is amazing to have had the opportunities that I have had when you consider it.”  Of course he is right; it is amazing.  He now has one more long jump to make, from private practice and public defending attorney to District Court Judge.  He is prepared to do the job, he is not afraid of hard work, and he promises this; “Running for judge is different than running for other public office.  I can’t promise people that I will give them things.  A judge has two jobs, uphold the Constitution, and enforce the laws.  I promise that I will do both of those things fairly regardless of your background, or your personal challenges.”  He also won’t hold it against you if you are a UK fan.  Although, I don’t know if you could blame him if he did.