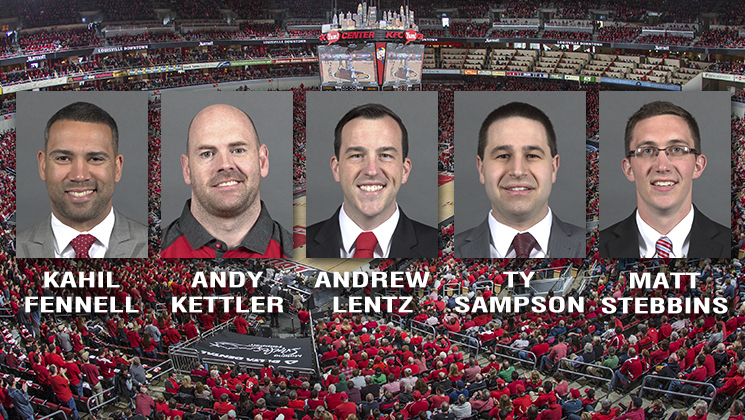 Joining the UofL staff are Director of Basketball Operations Kahil Fennell, an assistant men’s basketball coach last season at Portland State; Strength and Conditioning Coach Andy Kettler, who has worked as the strength and conditioning coach for the West Virginia men’s basketball team for the past 10 years; Assistant Athletic Director for Men’s Basketball Andrew Lentz, who has served as Associate Athletics Director for Branding and Creative Services at Baylor for the past year; Video Coordinator Ty Sampson, who has worked the past five years as video coordinator for men’s basketball at Xavier; and Equipment Manager Matt Stebbins, the Operations Manager and Brand Builder for the Worcester Bravehearts baseball club for the past two years.

“Kahil is a fast riser in college basketball,” said Mack. “He’s sharp, organized and possesses a work ethic like no other. Kahil will touch every aspect of our program including managing budgets, travel, and scheduling to name a few. He’s a team player and is excited to be a part of the Louisville Basketball family.”

While on the staff at Portland State, the Vikings produced a 20-14 record last season, their most wins in 10 years and their third-most wins in 22 years in the Big Sky Conference. Portland State’s 10 road wins in head coach Barret Peery’s first season were the most in school history and the Vikings earned a berth in the CollegeInsider.com postseason tournament. Portland State led the nation in turnover margin (+5.4) and ranked second in steals (9.8 per game) and third in scoring (85.2 points per game).

Prior to his year at Portland State, Fennell (pronounced kuh-HILL fe-NELL) spent two seasons coaching at Texas-Permian Basin. He was assistant coach in 2015-16 at the Division II program before his elevation to associate head coach of the Falcons in 2016-17. The Falcons were conference regular season and tournament champions in 2016-17, setting a school record with 26 victories. UTPB led the nation in rebounding and ranked 12th in scoring that season.

Fennell attended Thousand Oaks (Calif.) High School where he was an all-league basketball player and team captain. Fennell played one season of junior college basketball at Penn State New Kensington, where he earned Academic All-State honors. He moved from there to play three years at the University of the Redlands, where he was team captain.

Fennell earned a degree in history from Redlands in 2004. He worked in the medical device industry for 10 years before transitioning into coaching. Fennell and his wife Sarah have two sons, Ezra (4) and Koa (3).

“Andy is one of the most respected strength coaches in the entire country,” said UofL Coach Chris Mack. “His work at West Virginia was easy to see by the impressive physiques on the court, but his impact on players was so much more. Andy will give our players an added toughness that Louisville Basketball will be known for.”

During Kettler’s decade with the Mountaineers, West Virginia participated in the NCAA Tournament on eight occasions, advancing to five Sweet 16 appearances and the 2010 Final Four. He spent two years as the head strength and conditioning coach at Winthrop. While there, he was in charge of all aspects of the Eagles’ strength and conditioning program as Winthrop played in the NCAA Tournament in both of his seasons there.

Kettler earned a bachelor’s degree in sports industries/recreation at Ashland in 2001. Following college, he served as an intern at Toledo before joining the Cleveland Indians organization as strength coach for one of Cleveland’s minor league teams, the Lake County Captains. After a one-year stint with the Indians organization, Kettler served as minor league strength and conditioning coordinator for the San Diego Padres’ six minor league teams. He attended the same high school as UofL Coach Chris Mack, St. Xavier High School in Cincinnati.

Kettler is a Certified Strength and Conditioning Specialist (CSCS) and is Corrective Exercise Specialist (CES) and Performance Enhancement Specialist (PES) certified. He and his wife, Kimbraly, have a daughter, Brynley, and two sons, Jaxen and Isaiah.

“I’m excited to add Andrew to our staff as Assistant Athletic Director for Basketball,” said Mack. “Andrew comes highly recommended and his creative work will help shape Louisville Basketball’s brand as we move forward. He has a passion for basketball and storytelling that will resonate with fans, alums and future Cardinals.”

Lentz will oversee multiple creative initiatives and have other administrative duties within the program. He will maintain the Louisville Basketball brand and identity through graphic design, social media, video production and other visual projects. Lentz also will be involved in multiple aspects in recruiting, operations, game day concepts and other responsibilities surrounding the men’s basketball program.

While at Baylor, Lentz oversaw digital assets, graphic design, video and licensing for the Bears while managing the athletics branding and creative services staff.

Lentz worked two years as the Director of Creative Strategy for Indiana Basketball (2015-17) under head coach Tom Crean after a year as assistant director of media relations (2014-15) when he led the communications efforts for the baseball program while assisting with football. Prior to his time at IU, Lentz was assistant director of digital media at Oklahoma for two years (2012-14), where he helped coordinate digital and social media for the athletics department and football program.

An Indianapolis native, Lentz earned his bachelor’s degree in sport administration at Ball State in 2010 and his master’s degree in sports management at Tennessee in 2012, also working with the Volunteer football team for two years. He is married to Kelly Lentz.

“Ty is a magician with video,” said UofL Coach Chris Mack. “Most video coordinators know how to edit video, but Ty knows how to fix an entire building when it goes off-line. He’s that good. He works his tail off and will do anything he can to help our players and coaches. I’m very fortunate to have brought Ty with me from Xavier.”

Sampson became Xavier’s first fulltime video coordinator for men’s basketball in 2013 after graduating from the University of Illinois in 2013 with a degree in finance. Sampson worked with the Illinois basketball program as an undergraduate, assisting with video operations, scouting, camps and other duties. He earned a master’s degree in business administration at Xavier in 2015.

“Matt was an undergraduate student manager for me at Xavier for four years a few years back,” said Mack. “Matt is as loyal as they come. He’s an incredibly hard worker and passionate about doing more than his area requires. He will be all in on Louisville Basketball.”

Stebbins managed the ballpark staff members, team merchandise and donations for community events for the Bravehearts, a summer collegiate baseball team located in Worcester, Mass. The team participates in the seven-team Futures Collegiate Baseball League (FCBL) with a 56-game schedule.

Prior to his stint in Worcester, he spent two summers as an equipment assistant with the Cincinnati Bengals and served as the Bravehearts’ Clubhouse Manager in 2015.

Originally from Sturbridge, Mass., Stebbins earned a bachelor’s degree in sports management at Xavier in 2016 with a minor in business. He worked four years as undergraduate as a program assistant under Mack, assisting with the coordination of team apparel and management of the team locker room as a member of the team travel party.