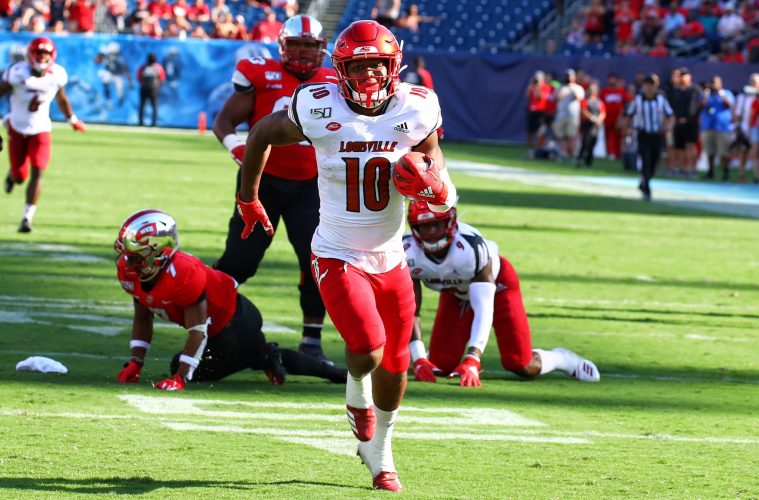 When Braxton Bragg invaded Kentucky in 1862 his hope was to threaten the Ohio Country and draw Kentucky into the Confederacy. His attempt ended in total failure. Kentucky moved from neutrality to full Union support, Bragg retreated through the Cumberland Gap, and 157 years later the Commonwealth would invade Nashville clad in red and black.

22,665 Kentuckians made the trip to Nashville in the hot, hot heat to watch the Hilltoppers take on the Cardinals. With the Cardinals coming off consecutively admirable, if not stellar, performances there was much anticipation in Card Nation. This was certainly aided by the announcement on Saturday that Jawon Pass would not be available at quarterback except at the utmost need. With Malik Cunningham’s knee injury appearing to be fully healed, those assembled in Nashville were anticipating the opportunity to see him in action.

And see him they did. WKU won the toss and elected to receive and after the (now expected) excellent Cardinals defense pushed the Hilltoppers off the field, Malik stepped onto the field for his first start of the season. Things did not go exactly as planned on the first drive, with a three play (plus a penalty) drive for -3 yards. But Scott Satterfield and Dwayne Ledford called in their mulligan for the game. After another three-and-out courtesy of the reborn defense, the Cardinals would score on every one of the following drives in the first half.

The only bright spot for the Hilltoppers in the first half would be a 77-yard pass play to tight end Joshua Simon for a WKU touchdown. The Cardinals defense had been nearly flawless to that point but Simon found a seam and exploited it. But the Louisville defense would once again step up and prevent the Hilltoppers from scoring for the rest of the half, capping it with a soul-crushing fumble recovery to end the half.

Whatever adjustments were made by the Hilltoppers at halftime were on point. Whatever happened to the Cardinals in the locker room was not. An obviously distracted Louisville team took the field in the second half and immediately delivered a fumble which the Hilltoppers were more than happy to convert into a touchdown. But the cushion seemed secure, and so did the confidence of the Louisville fans.

But as with anything, things can change in an instant. Malik Cunningham kept the ball on a routine play up the middle, and suddenly a helmet not containing a head rolled across the turf. Malik rose on his own accord and started for the sideline, as by rule he had to come out unless Louisville burned a timeout. The Cardinals fans then fell silent as the QB fell to a knee just short of the sideline, and the Louisville trainers attended to him.

And so the third Louisville QB, Evan Conley, stepped on to the field to take the snap. A routine pass play, and the Cardinals defense returned to the field. As they’d done all night, and indeed all season, they showed their mettle as Anthony Johnson forced a fumble after a WKU completion. Again and again the Louisville defense has stepped up to soften the blow when the offensive unit suffers. And again and again the offensive unit has needed that cushion.

Yet when Evan Conley returned to the field, it was a surprise. Per Conley himself, he was surprised. Headset on, helmet off, he stood on the sideline ready to call in plays when he was told to grab his helmet and head out. The result? Pass completed to Tutu Atwell, 62 yard touchdown. Evan Conley and the Cardinals rejoiced while Card Nation breathed a sigh of relief. The end was in sight as the third quarter came to a close.

What is that old saying, about not counting chickens? Despite taking a 38 to 14 lead into the fourth quarter, the Cardinals day was not done. The Hilltoppers and their (admittedly) more sizable crowd were not yet ready to concede the field. Fortunately, from their perspective, the Cardinals seemed willing to give ground. A Marlon Character roughing the passer penalty was called on the first play of the fourth quarter for contact to the head extending the WKU drive. That set the tone, and the Hilltoppers pressed on to make it 38 to 21.

What should have been an expected on-side kick was recovered by WKU on the next play, and suddenly the future was in doubt. Many in Card Nation started to wonder, “Has it been smoke and mirrors? Are the ghosts of 2018 ready to haunt us once again?” Who would be the hero of the day to save Louisville from an uncertain end?

As they have, time and again, the defense stepped up. Passes broken up, fourth down attempts denied, the necessary work done, the last full measure given. The endgame performance was only marred by a very questionable targeting penalty on Jack Fagot. The penalty upheld, Fagot was ejected. He will not be available for the game at Florida State on the 21st. Many found it ironic that no penalty was called on a play resulting in Malik Cunningham’s bell getting rung, but Fagot was ejected for a well-timed hit. Whatever the case, the defense held firm and blanked the Hilltoppers for the remainder of the game.

Despite some additional frustrations (read penalties) from the offense, the one thing they did not do was make any critical or game-changing mistakes. A 3rd and 26 after three straight penalties is never ideal, but at least Conley and Atwell were able to make up for most of the mistakes and keep WKU away from the red zone after the punts. A win, is a win, is a win, and the Cardinals have matched their win total from 2018. A reminder, it also took three games to notch two wins last season.

But now the focus turns to ACC play. The Cardinals travel to Doak Campbell for a very beatable Florida State team. And the question that has plagued coaching staff and fan base alike remains. Who is Louisville’s quarterback? Jawon Pass injured, Malik Cunningham also injured? Malik looked good in the post-game availability, so perhaps there should not be much worry there. But now Evan Conley enters the mix by demonstrating his capabilities.

When asked about his depth at QB, Scott Satterfield wryly replied that he’s always got Tutu Atwell as a backup. When asked the same question, Atwell matter-of-factly said, “I’m always ready to go at quarterback…I think I still got it.” Next Saturday will tell us whether the 2019 Cardinals have it.