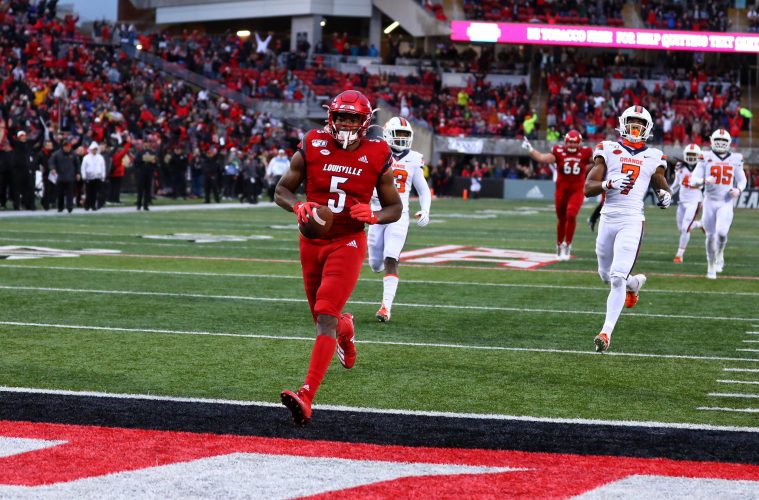 It would have been easy for the Louisville Cardinals to take the foot off the gas after achieving bowl eligibility last weekend. In a season that had been fully written off before the first snap it could be forgiven if the Cards said, “Good enough,” and rolled to a bowl. This could easily have been the case against a Syracuse team desperately clinging to bowl eligibility and coming off a retooled dominant win at Duke.

On a cold, rainy Senior Night at Cardinal Stadium it was the lower classmen who paid tribute to their departing teammates in a 56-34 win that simultaneously dashed the Orange’s bowl hops while improving Louisville’s.

This was not a senior class recruited by Scott Satterfield’s staff, but it was one that both the coaches and underclassmen felt deserved to be honored. It’s fitting therefore that the lower classmen, sophomore and freshmen, chose to pay tribute to their elders with stunning performances. For the first time since 1999 the Louisville Cardinals have a 1,000 yard rusher and receiver in the same season. Compared to the late game fireworks these quite notable events now seem mundane in hindsight.

Louisville received and struck quickly on their first drive, finishing things with a seven yard touchdown pass to R-Fr. Marshon Ford from R-So. QB Micale Cunningham. Early in the drive, though, it was Javian Hawkins that crossed the 1,048 yard threshold to become the all-time leading freshman rusher in school history. While the milestone was met with little fanfare on a routine rush, the overall performance garnered more attention as Hawkins notched his first career 200 yard game. Those 200 yards marked the sixth time Hawkins has bested 100 rushing yards in a game and becomes the first freshman in school history to do so.

In the passing game it was sophomore Tutu Atwell that provided the bulk of the fireworks. On a 90 yard touchdown pass (dropped on a dime by Cunningham) Atwell simultaneously matched the fourth longest scoring pass reception in school history and crossed the 1,000 yard mark for the year. It’s only the third time in school history that a 1,000 yard rusher and receiver have shared a season. Atwell’s season has certainly featured plenty of big plays; six of his TDs were for 50+ yards.

If anything the game could be described as quintessentially Louisville Football 2019. Offensive production was met by a lackluster defense, and despite jumping out to a 21-3 lead in the first quarter the Cardinals were far from safe. Louisville took it’s 28-10 lead into the locker room as returning rain scared all but the most die-hard fans into the concourse. When the teams returned to the field, the heat of their offense could have served to replace the heaters in the PNC Club.

In a third quarter that featured 38 combined points there was a lot to praise and a lot to criticize. The Cardinals defense let leading Orange rusher Moe Neal have his a field day on his way to a 163 yard, single touchdown performance. While there were many examples of the Cardinals defense bending and not breaking they would still manage to allow 11 chunk plays, three resulting in touchdowns including a 45 yard Neal scamper. As the clock rolled over to the fourth quarter it was easy for many to reflect on the wins against Boston College, Wake Forest, and more worryingly the loss to Florida State.

Louisville was certainly giving Syracuse every opportunity to crawl back into the game, but the Orange were determined to give those opportunities right back. Dino Babers called for the onside kick after Syracuse drew to within 15 points of the Cards, and at first appeared to recover in what would have been a shocking turn. After review, the official call was an illegal block on the kicking team leading to a re-kick that gave the ball back to the Cardinals. Louisville would capitalize, and you could sense the jubilation start to rise as Javian Hawkins (and effectively the entire team) were hit for an unsportsmanlike celebration penalty.

Early in the fourth the Orange struck back, and while the onside kick was expected they instead kicked it deep. In the end it did not matter, as Micale Cunningham threw an ill-advised screen in the direction of Tutu Atwell that was easily picked by Syracuse’s Cisco. As much as can be found to criticize in the Louisville defense, they bent but did not break. Constant pressure (two sacks for 18 yards) led Babers to experiment with backup QB Clayton Welch but resulted in a turnover on downs near the same spot where the Cardinals had just given it up. The Cards didn’t have much success themselves but a booming punt from Mason King had the Orange starting at their own 16. Jawhar Jordan was not phased, and on the next play slipped through at least three tackles for an 81 yard run down the sideline.

What followed was a continuation of the self-inflicted disappointment that has been a hallmark of this Syracuse season. Three consecutive penalties, including back-to-back false starts, forced the Orange from the two back to the 18 yard line. A short desperation throw into triple coverage resulted in another turnover on downs, and the Cards quickly pushed the ball up the field on the strength of seven Javian Hawkins runs for 80 yards. The Cards capped it with a 14 yard Cunningham to Atwell touchdown and that was all she wrote.

As the clock ticked down, some of the seniors gave in to their emotions and cried tears of joy. In the stands the fans began to chant, “Beat UK.” In the post-game availability the question was posed to Pass, Beckton, Hawkins, and Cunningham. Does Scott Satterfield understand the importance of the UK game to fans and players?

Cunningham: “…you know he already know it.”

Becton: “He did already know it.”

Hawkins: “He should already know it…and he does.”