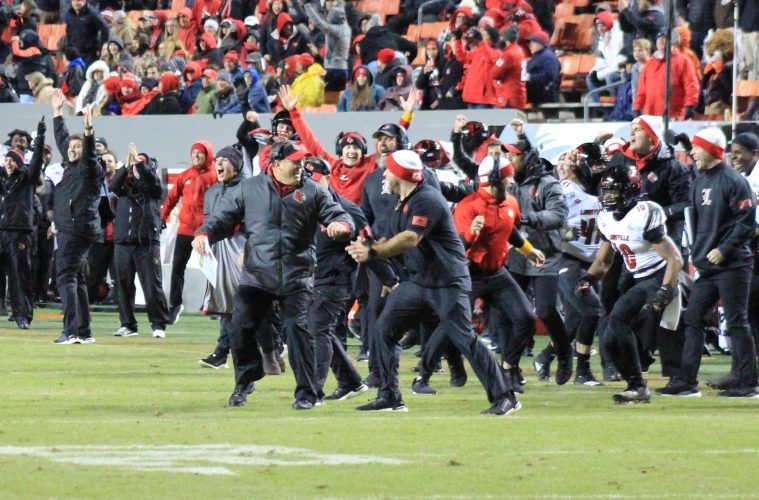 Intelligent fellow, founding father, and straight pimp Benjamin Franklin is oft quoted as saying, “Never leave that till [the second half] which you can do [in the first].” As for the lazier me, I’ve always been more fond of Douglas Adams’, “I love deadlines. I like the whooshing sound they make as they fly by.” The Louisville Cardinals faced a couple of hard deadlines on a cold, windy, and sometimes rainy night in Raleigh, North Carolina. Get your sixth win, earn bowl eligibility, and do it in under 60 minutes.

Taking a page out of my playbook, Card Nation decided to be Procrasti-Nation. Better late than never, right? Suffice to say that a bowl bid was better than nearly anyone expected out of this season. But the Cardinals got it with a 34-20 victory over the Wolfpack.

Looking back at Blankenbaker’s stat comparison or our preview you’d be quickly reminded of why North Carolina State University was last in the ACC for offense and second to last for defense (conference stats only). Of course you’d also be reminded that the last in the conference defense belonged to Louisville, but nevermind such annoyances. When considering the Wolfpack it’s only fair to take into account attrition through injury. Losing three of your top four cornerbacks, for example, will put a dent in any defense. And no offense to Evan Conley, but putting an entire team’s offense on the back of freshman Devin Leary isn’t a recipe for success in Raleigh.

So color Cardinals fans surprised when everything concerning from the Miami game once again became manifest on the field. Senseless penalties? Check. Soft defense? Check. An offensive line so porous as to be concerning over your quarterback’s safety? Check. Certainly the loss of Mekhi Becton would be felt, but the degree of pressure placed on Micale Cunningham and the egregiousness of the penetration in the first half was frightening at times.

But every opportunity handed to the Wolfpack was handed right back to the Cardinals. Each team had three opportunities in the first quarter, but the frame ended right where it started after an N.C. State fumble (stripped by Russ Yeast) was only able to produce a missed Ryan Chalifoux field goal. The first play of the second quarter produced the second of the Wolfpack’s three turnovers on Dorian Etheridge’s first career interception, and on a shovel pass no less. Finally the Cards were able to capitalize on a 43-yard dime from Micale to Dez Fitzpatrick.

The rest of the half left much to be desired. The Louisville defense bent, but did not break, on the next drive and managed to hold N.C. State to a field goal. But the sputtering Cardinals offense was forced to punt into the wind and Mason King’s kick glanced off the side of his foot for just 17 yards. The home team wasted no time in capitalizing, and going into the locker room the Wolfpack had their first lead since over a month ago at Syracuse.

We’ll probably never know exactly Scott Satterfield and staff said to the players in the locker room at halftime. It’s safe to say Coach Satt is more likely to lead with encouragement as opposed to discouragement. Or, perhaps all that was needed was a strategic shift. And so when the Cardinals came out and received the ball to start the second half it was refreshing to see them immediately begin assaulting the weakened Wolfpack secondary.

Scott Satterfield’s ground and pound offense got a free upgrade to air delivery thanks to N.C. State’s personnel issues and the flat out speed of the Louisville receiver corps. As the game wore on the pass interference flags began to fly as the Wolfpack found it necessary to bail themselves out after being repeatedly beaten on routes. Three successive Cardinals drives (punctuated by another Russ Yeast strip) were capped by Micale Cunningham touchdown passes to Tutu Atwell (74 yards), Marshon Ford (42 yards), and Ean Pfeifer. When Ean Pfeifer catches the ball, he scores a touchdown; the stats bear it out.

The home team wasn’t quite ready to throw in the towel, to their credit, but a young Louisville kicker had other plans. Ryan Chalifoux, redshirt sophomore backup for Blanton Creque, had already missed a field goal and a PAT. Every jaw in the stadium hit the ground when Chalifoux lined up for another field goal attempt, only to roll right, select his target out of coverage, get hit as he threw, and connect with Marshon Ford for a touchdown. The first touchdown, by the way, by a non-QB since the 2007 Orange Bowl. N.C. State was still kicking, and continued to press, but when the kicker is making your secondary look like swiss cheese then it’s all over but the funeral.

It’s somewhat sad that it’s taken this long to get to one last tidbit, but in a crazy game there’s just too much to discuss. But we’d be remiss if we didn’t point out Javian Hawkins and his attainment of a 1,000-yard season, the first for a Louisville running back since Bilal Powell. He almost had an extra accolade, but missed the all-time freshman record by just three yards. It’s probably safe to say we’ll have something extra to cheer about early in the Syracuse game.

Six wins. That’s quite a thing to say, especially in a season following one so dismal and in which all projections topped out around two or three wins. It’s one thing to talk about cultural change and how nice everything feels, but to see the product on the field match the personalities is more than satisfying.

There are plenty of things to be concerned with in this game. N.C. State is arguably the weakest team in the ACC and a team’s performance against them tells you far more about the opponent’s weaknesses then it does the Wolfpack’s. Through the looking glass, we see a team that still struggles with penalties, mental mistakes, and issues in coverage as well as at the line on both sides of the ball.