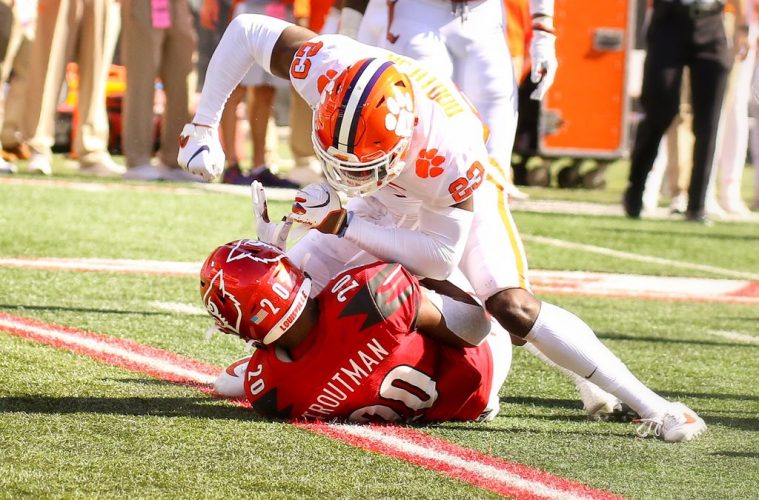 It was just over a year ago that the Louisville Cardinals traveled to Death Valley, already in the midst of a woeful slide into something less than mediocrity. They left that game, hats securely in hands, wondering just how much lower things could actually go. Anytime you ask a Cardinal about last season, the response is consistently, “We don’t talk about 2018.” On Saturday at Cardinal Stadium the final score was 45-10 in favor of Clemson, but both mathematically and observationally it’s clear that this season is not last season.

One area of clear disparity, however, was that between the Cardinals defense and the Tigers defense. Indeed, when one team (Clemson) has the third-ranked D in the nation and the other (Louisville) sits at 101st it’s only natural to expect a lopsided affair. Yet despite missing Dorian Etheridge (targeting against Wake Forest) in the first half the Louisville defense managed to deliver some surprises. Clemson QB Trevor Lawrence’s decision making was anything but Heisman quality as Jack Fagot and then Russ Yeast notched their first career INTs in the first half. C.J. Avery performed more than adequately as a replacement for Etheridge including a crushing tackle to force a punt late in the second quarter. Trevor Lawrence and RB Travis Etienne were performing adequately, though not exceptionally, but the Louisville defense did not seem phased.

Accompanying the Louisville defense’s unexpected excellence was a Clemson special teams and offense that seemed more than willing to present opportunities on a silver platter. Mid-way through the first quarter a muffed point seemed to be downed by Clemson just inside the one yard line, but after review the officials ruled it a touchback. Between the Tiger mistakes, interceptions, and the Louisville defense pinning Clemson for just its fifth sack in seven games, it was easy to feel a sparkling sense of hope. But a soft zone defense and poor clock management at the end of the first half allowed for a Lawrence to Justyn Ross TD pass that made it 17-3 and changed the entire tenor of the game. Amplified by Clemson having won the toss and deferred, things seem poised to collapse quickly for the Cardinals in the second half.

Contributing heavily to the perilous position was a Louisville offense that could not find a rhythm. Micale Cunningham got the start but once again a rotation of Cunningham and Evan Conley was the order for the day, albeit not out of need due to injury. Conley has repeatedly shown strength beyond his years and did so again as he provided the spark that led to Louisville’s first three points late in the first half. Yet despite Cunningham’s clear capability and Conley’s clear growth, both QBs finished 4 for 11 with two INTs for a combined total of just 107 yards passing. Complicating matters were a number of could have been dropped touchdown passes to Tutu Atwell. The Cardinals receiver did give the crowd a scare as he crashed head first into a table on the Clemson sideline after one instance of success but fortunately was up relatively quickly and completed the game.

Without much help, and without the necessary depth, it was inevitable that Clemson would start to find and exploit the weaknesses of the Louisville defense as the game progressed. Things did turn suddenly when Tigers cornerback Andrew Booth Jr. decided to express his displeasure with Trenell Troutman by way of a sucker punch to the helmet which earned him a prompt ejection. The Cardinals were clearly fired up and continued to show fight, to their credit, but the offense simply could not deliver. With Khane Pass and Monty Montgomery (temporarily) injured the Tigers struck hard at the end of the third quarter and it was clear the dam had broken.

A 21 point fourth quarter swept away all remaining resistance and made it difficult to look at the stat line. Clemson would end with 551 total offensive yards to Louisville’s 263, with the Tigers defense allowing 107 yards passing and 156 yards rushing. The Cardinals offensive line gave up six sacks for 39 yards and a total of 11 tackles for loss. One bright spot was Javian Hawkins managing 129 yards and a rushing TD to make him the first individual 100-yard rusher against Clemson in 28 games, breaking a best in the FBS defensive streak. But compare this to Clemson’s Travis Etienne and 192 yards plus a rushing TD accompanied by Trevor Lawrence’s 233 yards and three passing TDs. That’s 126 more yards of passing than Cunningham and Conley combined, and is a clear recipe for a bad day.

Despite all this, much can be taken away that’s positive. It was clear in the post-game availability that only Scott Satterfield was immediately ready to press ahead. The players sat slumped in front of the microphone, giving terse responses to tough questions. It’s up to the coaching staff to get them back on the horse and ready to ride as the Cavaliers of Virginia prepare to charge into Louisville next Saturday. Satterfield and staff have said repeatedly that they are not here for moral victories, but as has been the case their strategy continues to be positivity and brotherhood.

This is 2019. This is not 2018. The loss to Clemson, and the manner in which it was delivered, should sting. But where last year’s loss in Death Valley was another nail in the coffin, this year’s loss at Cardinal Stadium seems to be anything but. The Tigers made the Cardinals angry. It’s time for Red Hulk.