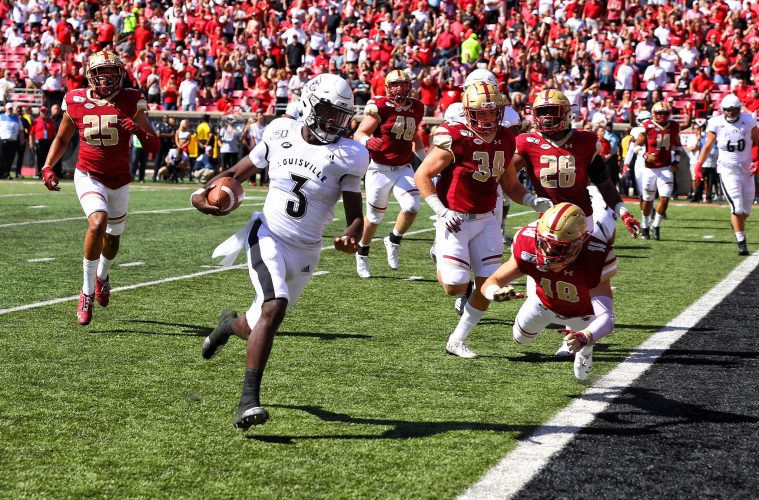 686 days later, the Louisville Cardinals have their first football victory against an ACC opponent since Nov. 18, 2017. The Cardinals and the Golden Eagles combined for 766 total yards with 514 of those through the air. Oh, wait. That was just in the first half. An offensive slug fest with some late game theatrics quite fortunately found the Cardinals on top as the final whistle blew and Louisville bested its 2018 win total with a 41-39 victory over Boston College.

Yes, you read that right. 766 total combined yards from both teams in the first half alone. 514 yards of passing in two quarters from a pair of teams that had been averaging a combined 450 yards passing per game. The final total would end up at 1,227 yards combined with 732 of those from passing. Louisville and Boston College are the football version of the Spider Man pointing meme. Run-centric, ground and pound, punch it up the gut. So when the Golden Eagles’ standout running back A.J. Dillon has more receiving yards than rushing for the majority of the game, it can make your world start to spin just a bit.

But despite the aerial theatrics there were a few other noteworthy spins. Javian Hawkins notched his third 100-yard rushing game of the season with a standout performance that featured a good number of spins, jukes, and otherwise fancy footwork. Two more centuries during his freshman season and he’ll join a club with Lamar Jackson and Victor Anderson. Hawkins’ 172 yards and single rushing touchdown were complemented by the efforts of Micale Cunningham (ask later) and Hassan Hall, with Hawkins/Hall becoming a dreaded 1-2 punch to the Cardinals’ opponents.

While the offensive core was moving the ball for the Cardinals on the ground, the defensive line was holding their own against a true phenom in A.J. Dillon. Dillon had averaged 155 yards in his past three games with 627 total on the season. At the end of the first half he had just 27 yards rushing, and in fact had more receiving yards with 36. C.J. Avery and Dorian Etheridge partnered with Yasir Abdullah to repeatedly stuff the Golden Eagles at the line. While Dillon would earn 118 yards total for the game, much of it was thanks to one busted 31 yard rush in the fourth quarter as the Louisville defense began to tire.

So where do you go when your star running back is being stonewalled at the line of scrimmage? Apparently you throw the ball to your tight ends. Time after time, the Louisville secondary would be confused by Boston College’s sizable tight ends in the persons of Korab Idrizi and Hunter Long. BC’s average 221 yards passing per game ballooned to a total of 304 on a stunning 20.4 average yards per completion. A team with 10 total passing TDs in five games this season had four today alone. Even when the Golden Eagles fumbled the snap on a PAT, QB Dennis Grosel calmly scooped it up and found a wide open Hunter Long in the end zone to turn one point into two.

Never ones to be outdone, a rotating tandem of Micale Cunningham and Evan Conley led Louisville’s own passing attack to pick apart the Eagles’ defense. If accuracy has been a concern, it was not today. Cunningham would complete 13 of 18 passes with Conley connecting on 10 of 16. Many of those dimes were dropped deep downfield, leading to 100-yard receiving games from Tutu Atwell, Seth Dawkins, and Dez Fitzpatrick. Seth and Dez both notched long receiving TDs at critical moments during the tit-for-tat scoring affair. In the end, a Cardinals team averaging just 212 passing yards per game would end with 428 and a much needed win. Despite a worrisome moment that led to Cunningham limping off the field, he would return and once again report all was well in the post-game press conference.

Despite the stunning totals, things did quiet down a bit as both teams made adjustments at halftime. Boston College’s attack was hobbled by an Anthony Brown injury, but R-So. Dennis Grosel performed ably, especially considering a passing TD on only his second play from scrimmage on the day. But a resurgent Louisville defensive secondary and the disruption to BC’s rhythm turned what had been a lightning fast contest into a slug fest.

And then, in a crucial moment, Louisville earned its first interception of the season. Anthony Johnson, having promised to be the first with a pick, delivered in outstanding fashion as the assembled Card Nation erupted with joy. It was at this point that everything felt well in hand; victory was now assured. But nothing is certain, and as the Golden Eagles returned to the familiar ground game they found success which would lead to some late game theatrics.

With just 10 minutes to play the Cardinals held on to a tenuous two point lead thanks to the BC two point conversion earlier in the game. On a critical fourth down the Eagles committed a devastating false start penalty, only to have Louisville gift wrap an eight yard pass for a first down on the next play. While the Cardinals defense held fast, it wasn’t enough to prevent Boston College regaining the lead with a field goal to make it 38-39 with just 3:39 left to play.

Enter Evan Conley, 18 year old true freshman. His partner? The (perhaps) more mature R-Sr. kicker Blanton Creque. In the ensuing drive there were certainly some heart stopping moments. A dropped handoff, fortunately scooped by Tyler Haycraft. A couple of questionable passes that just barely avoided interception. But with a lot of skill and a bit of luck, the young Conley pushed the ball to within 41 yards where Creque connected to restore the lead to 41-39. Several desperation heaves on Boston College’s final series were for nought, and the Cardinals earned their first ACC victory in just under two years while also besting the 2018 win total.

The sound of a collective sigh of relief along with locker room jubilation echoed throughout Cardinal Stadium. But doubts remain as the Cardinals look ahead to Wake Forest next week. Two consecutive false starts by the center. Several eminently catchable and yet dropped passes. Gaps the size of a Buick in the secondary. All things that make the astute observer queasy.

But not tonight. Tonight there is joy in Mudville. The Louisville Cardinals have found the means to win once again. The Satterfield era continues apace.