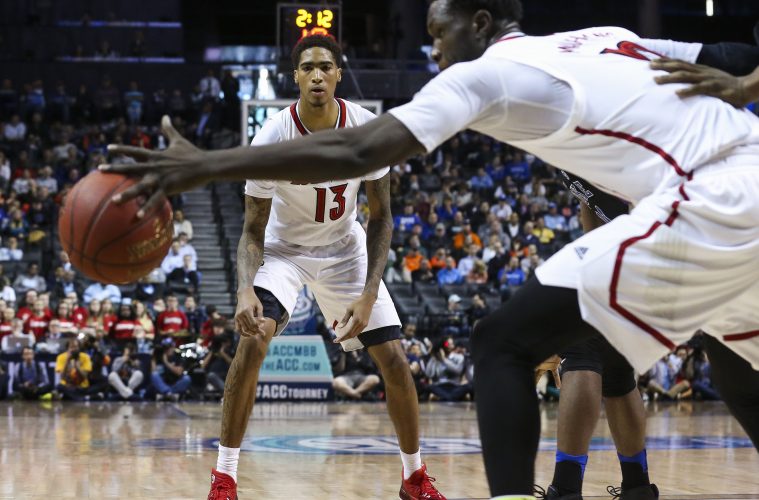 Welcome back to the Tournament Louisville fans.  It’s been a long 24 months since the Cards last played an ACC Tournament game.  Heading into the 2015 Tournament UofL had been bounced out of the ACC Tournment in its first game after holding a 10-point lead in the 1st half (Mike Eades also officiated this game as he did the Louisville/Duke Quarterfinal on Thursday).  The Cards would go on to the Elite 8 anyway and were a Mangok Mathiang Free Throw away from the Final Four.  Had Bryn Forbes and Michigan State not gotten hot in overtime maybe the Cards would have danced a little longer.  Nevertheless, here we are with a new dancing partner Jacksonville State.

Louisville is ready because they’ve played a daunting schedule in the best conference in college basketball and still won 24 games and got a #2 seed.  As it sits UofL won’t play another ACC team until at Earliest the Regional Final if Miami can catch a hot streak. Of course Michigan State is in the Midwest Region as well, but other than Miami & Purdue the Cards have 13 other teams in its region that haven’t seen the Cards in quite a while.  And that’s huge for the Cards who typically have an advantage versus teams who haven’t faced their switching defenses in the past.

Louisville isn’t ready because much of the team has EXTREMELY LIMITED post-season experience.  That’s a big reason why Duke was able to comeback in the ACC Quarterfinals.  The Cards hadn’t faced a post-season punch from an experienced group like Duke in two years and many of the current Cardinals either weren’t around or had limited roles the last time a Louisville team post-seasoned.  UofL really needed a decent run in the ACC Tournament to season itself for the ‘do or die’ type of basketball that comes with “The Big Dance”.  If the Cards had played in last year’s post-season, my opinion is that they would have advanced to the ACC Semifinal.  So not having that post-season experience is a big drawback and they weren’t able to get that in Brooklyn with the early exit.  Additionally UofL’s match-up zone isn’t where it needs to be, they have a problem finding reliable back-up guard play when Quentin Snider & Donovan Mitchell get into foul trouble.

What Do The Cards Need To Make A Run?

Louisville needs to play consistently if they want to make a run in the NCAA Tournament.  The good news is that the Cards only have a handful of ‘complete’ games this year where they were clicking on all cylinders.  The bad news is that those games came at the KFC Yum! Center.  But typically Louisville has been able to put together an impressive body of work despite a lack of consistency in the most difficult conference…….. which makes them dangerous.

Essentially the Cards have earned a #2 seed and have rarely played its best ball.  If the Cards can find its optimum game and stay there for 3 weeks, who knows what can happen?  Ray Spalding is Louisville’s highest potential player and can impact a single game more effectively than any other Cardinal, but we see Ray play that way only in stretches.  Donovan Mitchell can win Louisville any game, but has had some ‘Off’ shooting performances that have led to losses.  The NCAA Tournament is a ‘win or go home’ tournament.  There is no best of 5 or best of 7 so the Cards must be sharp in each tournament appearance and that’s been the main problem is playing consistent basketball from one game to the next.  The effort is always there, it’s the execution that has been the problem.

What Will Doom Louisville in the NCAA Tournament?

A myriad of things can end a season in a single elimination tournament.  But from what we’ve seen already this season from Louisville basketball that have led to losses.

Fouling:  The Cards take a lot of chances on defense that lead to some silly fouls.  In the ACC Quarterfinal both Donovan Mitchell & Quentin Snider were the victim of a light whistle and Rick Pitino struggled to find an adequate replacement in a critical moment with both of his guards dealing with foul trouble.  UofL’s front court can take some attrition, but its backcourt can’t.  Additionally Louisville sends its opponent to the Free Throw line too often anyway allowing 22.2 Free Throws per game while getting 21.3 Free Throws per game for themselves.  For a team with a #2 seed winning as many games as the Cards have won, UofL should average about 4-5 more free throws than their opponents per game.  But because they foul too often the ratio is upside allowing lesser opponents to stay closer and better opponents to have larger leads late.

Elite Bigs:  Louisville has an advantage over most front courts.  But when they have run into teams with more comparable size, particularly when the big men weigh more than 235 Louisville has had problems inside (Baylor, Virginia, Wake Forest, and North Carolina).  There aren’t many programs in college basketball that have big guys to match UofL….. but there are plenty of those teams in the NCAA Tournament.  Louisville has to rebound better than its opponents in the NCAA Tournament and they have to come up with loose balls and long rebounds.  The Cards have struggled with really good big men this year so if UofL wants to advance each round then Mangok, Anas, Jaylen & Ray all need to play well as opposed to finding the hot hand.

Make Free Throws: This one is obvious.  The Cards were 15-26 in the ACC Quarterfinal (lost by 4) and were 4-13 vs. North Carolina (lost by 11).  Made and missed free throws change momentum of the game and impact the outcome just as much as the actual scoring or not scoring.  Against Duke the Cards missed critical free throws that contributed to the diminished morale as they were also missing shots from the floor.   The Cards have to take advantage at the stripe if they want to move forward in the NCAAs.

Off-Shooting Night: Sometimes it just isn’t your night.  Louisville hasn’t shot the ball consistently enough, night in & night out to make its fans feel comfortable in a single elimination tournament.  The NCAA Tournament is a battlefield for shot makers and while Donovan Mitchell & Quentin Snider are more than capable to carrying UofL in a single game they are also prone to cold shooting nights.  In his last 3 games Donovan Mitchell is 10-38 from the field.  Q has shot terrific of late, but did go cold against Duke for a stretch when the Cards needed a bucket to turn the tide.  Essentially Donovan & Quentin BOTH need to be on in the NCAAs because the other picking up the slack for the other may not be enough to pull through each round.  If they are both on then LOOK OUT and pack appropriately for Phoenix.   If not, I think the best we’ll do this year is Kansas City ribs.

Sometimes you just get beat

Sometimes you play the game and U.S. Reed hits one from midcourt.  Sometimes the opponent is just better, gets hotter, or has everything go their way.  It happens.  That’s also why the NCAA Tournament is full of drama because it only takes one bad stretch (or one really crazy good stretch from your opponent) to end a season.  We’re now in an environment where everything matters.  How much sleep a player gets, what he eats, how he stretches & warms-up, how loose he is, how focused he is, how prepared into the scouting report each member is.  But a team can still take care of all that like pros and get beat……  they’ll just feel better about the outcome if they do everything in their power each game to survive & advance.

Can Louisville Make A Final Four?

Yes.  Louisville has elite guard play and a stable of bigs that is difficult for any team to match. When Louisville plays well they can beat any team in the country.  The trouble is that we’ve seen 2-3 game stretches of that this season and then a ‘clunker’.  So consistency is key.  In the NCAA Tournament I look for the Cards to really re-emphasize ball movement like they did when Quentin Snider was out with his hip injury and make teams defend UofL more honestly.

The Cards certainly got a terrific draw and a Regional Final looks to be VERY ACHIEVABLE.  But they are going to have to beat teams that are fighting for their lives and that’s a situation that most of these UofL players have yet to experience.  Louisville is tough to beat on any given night so if they get eliminated then that squad will have earned it.

Can They Win It All?

I don’t think so.  Being an alumnus of UofL wish I could say that I believed that this particular team will win the NCAA Tournament.  But I don’t think they’ve found “IT” yet.   The 2012 team was not as good as this 2017 team and found a way to the Final Four, and I really think that we may be seeing something similar happen where 2012 built towards the 2013 Title.  I could be wrong and this team could find that special trait in March and carry it for 6 straight wins, but I believe that not having played in the tournament a year ago and having that experience really limits the potential of this team……..  let’s hope I am wrong and the loss to Duke ignited something within this team.  I’d like to see more self confidence when things start to unravel, the ability to reset and regroup is huge in the NCAA Tournament.  If the Cards can some how artificially find a way to learn those lessons then they could prove me wrong.  But I think UofL is on a course to be the 2018 Champions more than being the 2017 Champions.