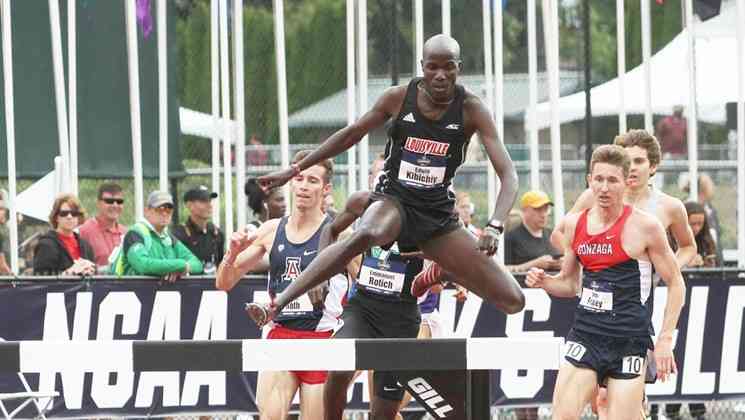 University of Louisville senior Edwin Kibichiy jumped out to an early lead and never looked back on his way to the 2017 NCAA 3,000 Meter Steeplechase title on Friday evening at Hayward Field.  He becomes just the second Cardinal to win an NCAA Outdoor title, behind Matt Hughes who won the 2010 and 2011 steeplechase title.  The Louisville men finished 22nd with 11.5 points for the third best finish in school history.

“Edwin was simply amazing in the steeplechase today,” said head coach Dale Cowper.  “He controlled the race from start to finish to become our fourth national champion in program history.  He has been an amazing representative of our program.  I can’t say enough about the way he has developed under Coach Walker’s guidance the last five years.”

He finishes his career at Louisville with four conference titles in the 3,000 meter steeplechase, including three straight ACC titles.  He also won the event at the 2017 NCAA East Preliminary Round. This tops an impressive season by Kibichiy who also earned USTFCCCA All-American honors in cross country, while finishing eighth at nationals for the best individual finish in school history.

“It’s been a great pleasure and an honor of my life to represent one of the best universities in the world for the last five years,” said Kibichiy.  “I’m really thankful for all the opportunities that the university offered me and I’m blessed to have been surrounded by amazing coaches and teammates. Thank you to all the Louisville fans and everyone who unconditionally supports our program. Thank you Card Nation, I couldn’t have done it without your support. I will always and forever be a Louisville Cardinal.”

Jerin Allen made his NCAA Championship debut with a seventh place finish in the high jump.  The junior cleared 2.13m (6-11¾) to score points for the Cardinals.  He finishes his first season with the Cardinals as a first team All-American.  Allen is also the ACC High Jump Champion.

“Jerin competed to the best of his abilities today and was able to earn first team all-American honors,” said Cowper. “We gave him the opportunity to focus solely on the high jump over the last four weeks and he was able to make an impact for us today.  Jerin has grown tremendously throughout the year and we’re excited to see what he can do in his senior campaign next spring.”

On Saturday, Hankenson will conclude competition in the heptathlon while Emmonnie Henderson will compete in the discus at 6:05 p.m. ET.