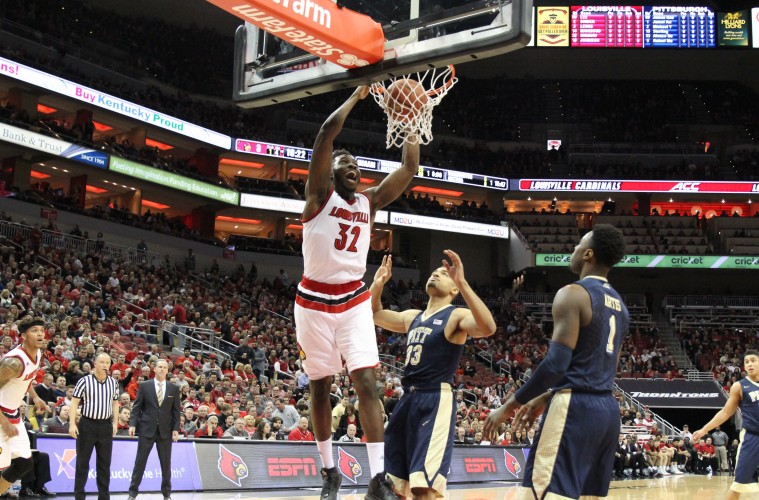 It always a top priority in college basketball especially once you get into conference play that you win your home games. A win on the road is like getting two home wins.  Louisville host Florida State, Wednesday at the KFC Yum Center in a game it really needs to win.

You say why, Florida State(12-5, 2-3) is nothing special. Well look at it this way. The Seminoles lost its first three Atlantic Coast Conference games. But, Florida State has won its last two games winning at North Carolina State and a win against 13th ranked Virginia, 69-62, Sunday.

“I’ll tell you what I tell the team,” said coach Rick Pitino at his pre game news conference, Tuesday. “Basically bucket your seat belts because this is going to be one hell of a ride with this ACC.

“It reminds me so much of the Big East in its prime in terms of you see it going in one way at the beginning. All of the sudden you see Virginia Tech and Clemson near the top. You see Georgia Tech playing real well.

” You think Syracuse is out of it now they get hot,” said Pitino.”Duke losses three and Virginia losses three. Suddenly the thing turns upside down. It will be a roller coaster ride like that and will drive fans and coaches crazy. But it will be fun playing this kind of competition.”

After the game with FSU Louisville hits the road for games at Georgia Tech, Saturday and Virginia Tech, January 27.

“Beasley, Bacon. They take you off the bounce as well as anybody in the league,” said Pitino. “They’ve got terrific one on one talent to go along with it they’ve got great size. These aren’t typical guards that you are looking at. They have great size and length.”

Florida State has some impressive wins such as the victory over Virginia. The Noles won at rival Florida plus a loss in overtime at Iowa 78-75. The Hawkeyes lead the Big Ten.

“You never know with freshman like Florida State has would be this good, this early,” said Pitino. “Some things you just can’t predict.”

Pitino isn’t sure how his team will react after dismantling Pittsburgh last Thursday, 59-41. The Panthers were held to 28.6 percent field goal shooting. It was the fifth fewest points the Panthers had ever scored and the lowest since scoring 39 in 2012.

“Anytime you have a totally new basketball team every games a journey,” said Pitino. “I don’t think you can say just because we played a great defensive game against Pitt its going to be there. I think this is a new basketball team that is learning. I think they took a lot of pride in what they did in terms of defense.

“Now they are going to go against a different type of basketball team in terms of one on one ability,” said Pitino.

Louisville (14-3, 3-1) comes into the game winning three of four of its ACC games. Pitino still can’t figure out what he has in this team.

“I don’t know what to say about this team is,” said Pitino. “I know they are going to give great effort.

“I couldn’t tell  you what are three major strengths are I couldn’t right now. At the end of the year I’m hoping its certain things. Play defense against Florida State like we did against Pitt. I want to see if that becomes the norm getting 40 defletions”.

Sophomore center Chinanu Onuaku is averaging 10.5 points and 8.8 rebounds, has really turned it on in conference play with four straight double-doubles and has made 67.3 percent of his field goals in the last six games.

“I don’t think he (Lewis) is struggling,” said Pitino.”Both those guys have taken challenged shots. Good shooters take good shots. Both those guys have taken challenged threes. If they take good shots they’ll shoot a high percentage. If they take bad shots they’ll shoot a low percentage. They are getting the penality of taking bad shots.”

-Pitino responded to a question during his news conference about a report in the Las Vegas Journal that he is interested in the head basketball coaching position there.

-Pitino would have none if it. “Next question guys,” said Pitino. “Anyone have a basketball question about Florida State I’d be glad to answer it. Please don’t talk about job openings in January.”

-The Courier-Journal reported that Richard Pitino, Rick’s son who is head coach at Minnesota said there is no truth to the reports.

-“Zero truth” the younger Pitino is reported saying. “Maybe he wants to do it, which I seriously, sincerely, 1,000 percent doubt.”

-The report had Pitino has the head coach and Richard as his assistant in waiting for when the elder Pitino retires.

-“I read that and was like, ‘What? Do I want to go back to that. The thought of going back to work for my dad again keeps me up at night.”