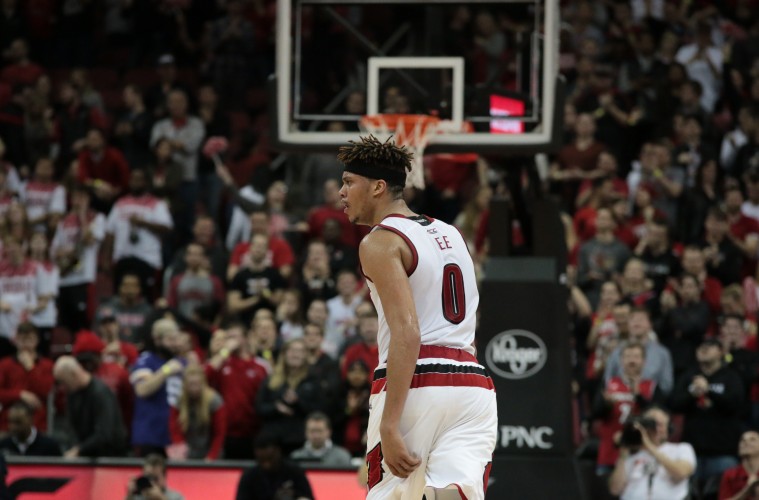 Ed PeakJanuary 16, 2016
Basketball251 views
It’s a cliche coaches love to use: “Offense wins games, defense wins championships.” It’s a saying that is as old and worn old as a used library book.
Louisville’s 59-41  dismantling of Pittsburgh, Thursday night at the KFC Yum Center, was of championship caliber.
Consider these facts: Pittsburgh came into the game averaging 85.3 points a game. It was committing just 11 turnovers a game and was shooting 79.3 percent from the free throw line.
Louisville (14-3, 3-1) ranked 21st (AP) took the Panthers out of any and everything it wanted to do.
Consider this:  PITT (14-2, 3-1) had 11 turnovers by halftime and finished with 19.
UofL’s defense harassed PITT senior guard James Robinson was 0 for six shooting from the field and had three turnovers. The Cards rotated people guarding Robinson. Sometimes it was Trey Lewis. Other times Quentin Snider and even freshman Donovan Mitchell.
The Louisville defense never let Robinson and his teammates feel comfortable.

“We were forcing a lot on the offensive end,” said Robinson. “They switched up defenses. We expected that. We weren’t making sound plays in the half court especailly in the half court offense. We took a lot of forced shots and thats why we shot a bad percentage.”

Coming into the game PITT was shooting 49.7 percent from the field. Thursday night the Panthers played like the basket had a lid on it. PITT made 14 of 49 field goals, 28.6 percent. They were credited with only four assists.
The PITT notes sheet read like this after the game……season lows in points, field goals, field goal percentage, three-point field goals (one), three-point field goal percentage and assists.
A total domination by Louisville. It prompted Pitt coach Jamie Dixon to say his team did nothing right.
“Certainly it was not our night, I can’t think of anything we did well.
“We didn’t do anything well and they seemed to make free throws, knock down shots and defend very well. We had a lot of travels,  a lot of unforced turnovers. Our shot selection wasn’t very good. Again give them credit.”
The Cards limped into halftime with a 20-17 lead shooting just 28.1 percent from the floor. But in the second-half Louisville shot 63.2 percent (12 of 19). With its guards having another off shooting night Damien Lee, Trey Lewis and Snider decided to drive to the basket. Especially Lee who along with Chinanu Onuaku led the Cards with 18 points each. Onuaku had 10 rebounds, three blocks and two steals.
Pitino wanted to talk defense:  “I feel like my long lost best friend came back tonight,” said Pitino. “We been waiting some time for us to play defense like that it was exciting to play that way. Just a brilliant performance by our guys.”
Louisville methodically pulled away in the second half. The Cards would miss a shot, but force Pitt into a bad shot or turnover at the other end.

“They came out aggressive, physical,” said Michael Young who led Pitt with 18 points   and eight rebounds. “They really got after us coming off a loss. You would expect them to play like that. That disrupted us a little offensively. They were aggressive and physical the whole game.”
Young came into the game making 59.7 of his field goals. Young finished 7 of 16.
“Because they were pressuring us we did lot of one on one drives. We didn’t pass as much as this team is known to be,” said Young.
“Everything was kind of sporadic today. Louisville and us (former) Big East teams we pretty much felt it was going to be a physical game,” said Young.
It was the Cardinals seventh straight win over Pitt and it now leads the series 11-5 all-time.
The two teams will play again on February 24th at the Peterson Events Center.
“The loss hurts,” said Young. “They beat us twice last year. We’ll dwell on it a little. It will be good go get home.”
Defense wins regular season games and eventually post-season championships.
The following two tabs change content below.