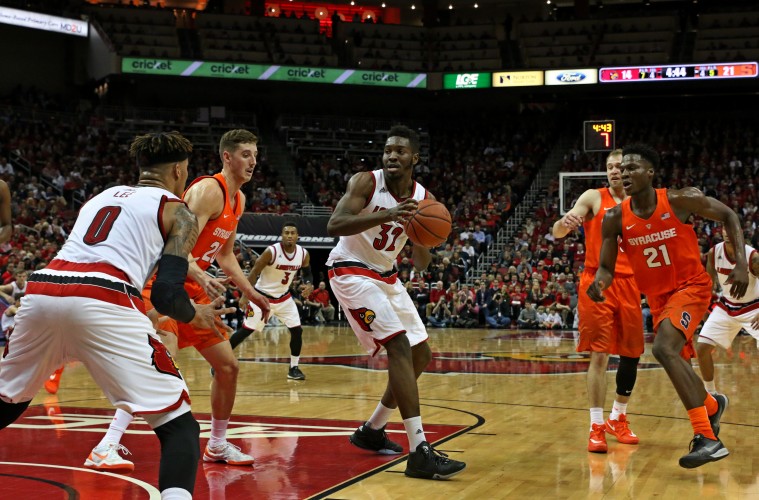 Ed PeakFebruary 18, 2016
Basketball1540 views
The early demise of the University of Louisville basketball team was greatly exaggerated.
Riding a two game losing, Louisville bounced Syracuse 72-58, Wednesday night at the KFC Yum! Center before 21,654. The effort put to rest this team was just playing out the string.
Louisville (20-6, 9-4) ran its home record to 16-1 with about 30 minutes of good basketball. Syracuse (18-9, 8-6) came into the game as one of the hottest in the Atlantic Coast Conference winning eight of its last nine and five straight with wins over Duke and Notre Dame.
“It was just a really, really special performance,” said Louisville coach Rick Pitino. “Nanu (Onuaku) had a big time game passing the ball, rebounding the ball, playing good defense. I think certainly all of our guys played terrific. I’m really proud.”
Things started shaky as the Cardinals got off to a slow start trailing 18-6 with 9:51 in the first-half. But a Quentin Snider 3-pointer seemed to loosen things up and the Cardinals started to get back into the game.
“We were a little nervous early in the game because we kept missing shots,” said Pitino. “What I tried to tell them was to go inside, paint touch, don’t start the game shooting NBA threes, start the game getting some movement. We started getting really good movement.”
The Cardinals started the first-half  making just one of nine from the field but made 11 of their final 22 shots to end the half. Trey Lewis’ three on a nifty pass from Snider who spotted up for a three-pointer from the right side gave the Cards a 28-27 halftime lead.
Once Louisville got the lead they poured it on. The Cardinals led 34-32 with 17:26 found themselves up 60-44 outscoring the Orange 26-12 over almost a nine minute stretch on the second half.
“In the second-half we really focused making sure we locked in on our defensive assignments,” said graduate student guard Damion Lee. “We knew our shots were eventually going to fall. It just took a couple minutes.We figured out how to get a spark and crack that lid off the basket and let it go,” said Lee.
Lee led Louisville with 15 points, had six rebounds, four assist and two steals. Onuaku had 13 points, 15 rebounds and four assist which included a nifty behind the back pass to Lewis for a layup in the second-half.
“I think Nanu got back to doing what he’s doing,” said Pitino. “You know he’s only still scratching his potential. He’s going to get much better. Stamina is the key to his game and he kept getting tired because he’s working real hard. But once he gets to the point where he doesn’t get physically tired — look out —  because he can influence every play with passing, his defensive shot blocking, and of course his rebounding.”
Onuaku had two subpar games at Duke and Notre Dame scoring a total of eight points and had seven rebounds. In both those games he finished with four fouls.
Wednesday, Onuaku had his ninth double-double this season. What has made the difference this season for the 6-foot-10 sophomore. “Probably just the confidence,”said Onuaku. “I wasn’t really a scorer. I really wasn’t a rebounder (last year). That was (Montrezl) Trez (Harrell) and Terry (Rozier). I was just a screener and roller. This year I worked on my game and I got better.”
In the second-half Louisville 55.6 percent making 20 of 36 and finished the game (32 for 67) 47.8 percent. The Cardinals who turned the second-half into a dunk-a-thon out rebounded the Orange 41-30 and had 21 assist on 32 made baskets. In the first-half the Cardinals had eight turnovers. They finished with 11.
“In the first-half we really didn’t move the ball,”said Onuaku. “At the end of the first-half we started moving the ball and the second-half we just took over. We were moving the ball as a team.”
It was a tough night for Syracuse. The Orange shot 38 percent from the field which included eight of 24 from three. The Orange also had their troubles at the free throw line making just 12 of 21.
“The second-half we just went back to probably 10 games ago where we didn’t rebound the ball,” said Syracuse coach Jim Boeheim. “I thought that was the main difference in the second half. They missed shots again, but they got it back.  I thought Louisville got going in the second half, they played much better offensively in the second-half and they started making some shots. Again, we got beat on the boards badly and I thought that was the big difference in the second-half.”
Guard Trevor Cooney led the Orange with 19 points while Michael Gbinije added 13 points and seven rebounds. Malachi Richardson added 10.
The following two tabs change content below.