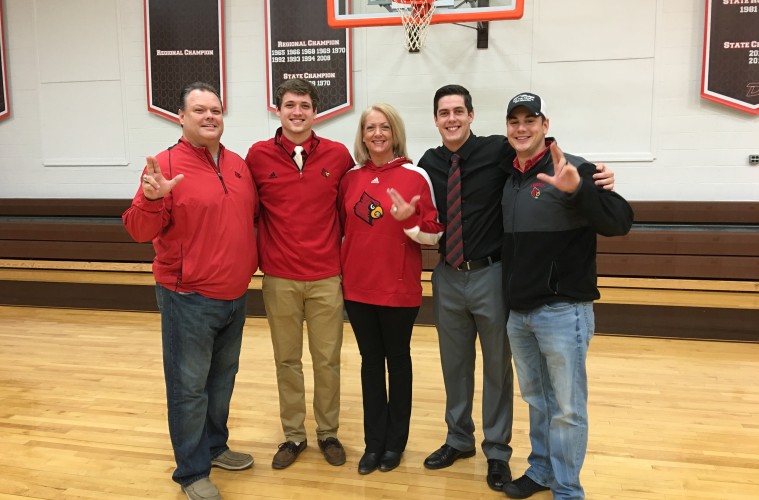 If bloodlines mean anything (and they should) Louisville signee punter/kicker Austin Johnson from Louisville DeSales High is from good stock.

Johnson, a First-Team All-State punter helped the Colts to a 39-5 record the last three seasons, signed with the hometown Cardinals on Wednesday. Austin’s brother Ryan was the Cardinals punter for three seasons (2012-2015). His dad Jeff was an All-Ohio Valley Conference kicker at Eastern Kentucky University.

“Its a dream come true, I can’t out into words what it means,” said Johnson who was the first Cardinal on the big recruiting board at the UofL Football complex early Wednesday.

Johnson said he was a Cardinal fan since his early days. He visited Kentucky and Western Kentucky and also got letters from dozens of other schools.

“No, never a doubt I was coming here,” said Johnson. Early in the recruiting process Johnson was in the office of head coach Bobby Petrino. Johnson said he was looking out at Papa John’s Cardinal Stadium, “I knew right then this is where I wanted to come,” said Johnson who was the Colts starting punter and place kicker for three seasons. “I felt at home. Why go anywhere else?”

Johnson as a senior punted 34 times for an average of 39.3 yards with a long of 53. He converted 42 of 52 extra points and made 8-of-13 field goals with a long of 40. As a quarterback, Johnson helped DeSales to its second straight Class 2-A state title in 2015. This  year DeSales lost to eventual state champion Mayfield. Johnson compiled 2,158 all-purpose yards as a senior. He passed for 13 touchdowns and rushed for nine.

“Austin came to camp here and we saw he was a two step punter and he got the ball off quick,” said coach Bobby Petrino. “We knew right then we had a senior punter. We wanted to keep him. He says he’s better athlete than his brother. I don’t know if (Ryan) would agree with that.”

The Cardinals lost their punter Josh Appleby and place kicker John Wallace to  graduation. Johnson will have a compete for both starting kicking spots right away.

“He put us in great field position so many times,” said DeSales coach Harold Davis. “He flipped the field for us and he did it as a sophomore.”

Johnson said he remembers the first Louisville game he attended on a cold December day in Memphis, Tennessee. “My mom (Jeri) was holding me and took me into the restroom to warm up because it was so cold.”

Johnson said he’s been in contact with the Louisville coaches and will have the opportunity to punt, place kick and maybe even kickoff. “I’ll do what ever they want me to do,” said Johnson.

Jeff his father was almost at a loss for words about a second son playing for Louisville. “Its a dream come true,” said the elder Johnson. “I can’t put into words, can’t describe what it means.”

Johnson was one of three local players to sign with the Cardinals. Wide receiver Keion Wakefield of Class 6-A State Champion Male and defensive lineman 6-foot-3, 275 pound Derek Dorsey from Manual.