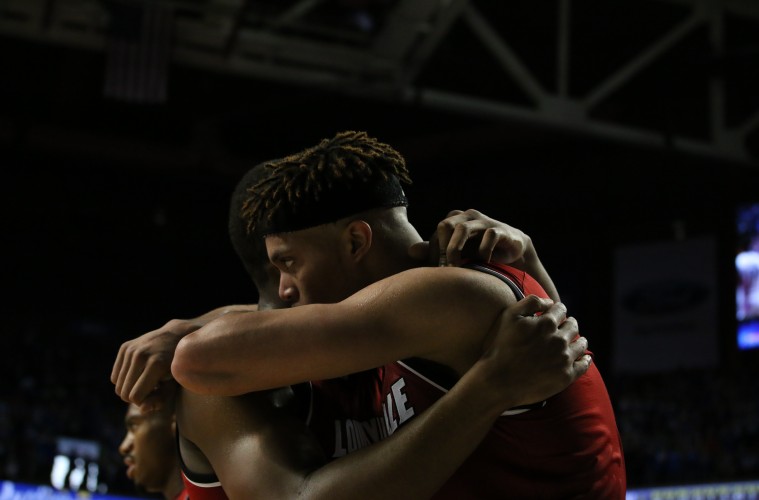 #4 seed Louisville fell to #13 Morehead State by a single point in Denver and was sent home.  Leading scorer Preston Knowles broke his foot during the game.  The city mourned.  St. Patrick’s Day green beer flowed well beyond midnight.  The season was over and the 1st of an endless series of Kenneth Faried references began that day.

Two years earlier in 2009 UofL was the #1 overall seed in the NCAA Tournament and disappointingly fell to Michigan State in the Elite 8.  The Cards bowed out in the 1st round as a #9 seed in 2010 to California and fans began to wonder if they’d miss their chance at a Championship or if they’d ever see the Final Four again.

Leading up to 2010-11, Rick Pitino warned fans that the season was going to be a “Bridge Year”.  Pitino expressed a desire to move the program in a different direction.  He was going to recruit different players and the entire athletic department eventually adopted the mantra: “Louisville First, Cards Forever”. To do this, there was going to be a growing period and the ‘bridge’ was undetermined by a series of ‘misses’ on the recruiting trail and transfer market.  Highly touted Huntington Prep star Justin Coleman was ruled ineligible, as was Memphis transfer Roburt Sallie.  Instead Coach Pitino was left with what was considered to be consolation prizes in Russ Smith & Gorgui Dieng….Russ came to campus injured and Gorgui had eligibility concerns of his own.

St. Patrick’s Day 2016 will have the same mood as 2011 but for a much different reason.  Louisville won’t appear in the NCAA or ACC Tournament in 2016 but on Monday Damion Lee referenced an old familiar term:

“I had two main things (when I came here). #1 was put myself in a position to try to win a National Championship with the roster that we have.  We can’t do that. It’s fine. I’m not complaining, things happen in life. #2 was be part of a family.  I think that’s one thing that I’ve done successfully is BRIDGE this team together a little bit.  Not just myself but with the character of the other 14 guys that I suit up with every day.”

Damion Lee & Trey Lewis came to Louisville to pursue their own goals & dreams.  Along the way they found themselves in between a highly successful era (2012-15) and a new/young era that is just beginning.  Try to imagine the growing pains this team would have had early on if not for Lee & Lewis.  Would the attitude be the same?  Would the future be as bright?  The ‘Done & One’ duo allowed an incredibly young Cardinal roster to compete for an ACC Title and grow towards 2016-17 gaining valuable experience along the way.

The “L & L Boys” also found themselves in the middle of a highly publicized athletics scandal that they would eventually pay the price for (along with the other members of the 2015-16 basketball team).  It wasn’t fair or just.  But Lee & Lewis had the character to accept a penalty they didn’t deserve with class & grace.

Tonight we get to celebrate their bridge.  Lee & Lewis may not have built a bridge that will lead to a national championship (we will find that out in the future).  But at the very least Trey Lewis & Damion Lee gave us an entertaining season with likable characters and good vibes for the future during a season of great uncertainty.  The “L & L Boys” gave the fans something to be proud of during a period of great embarrassment.

Tonight these two will earn a most deserved tip of the cap from the city of Louisville, the university, its fans & alumni.