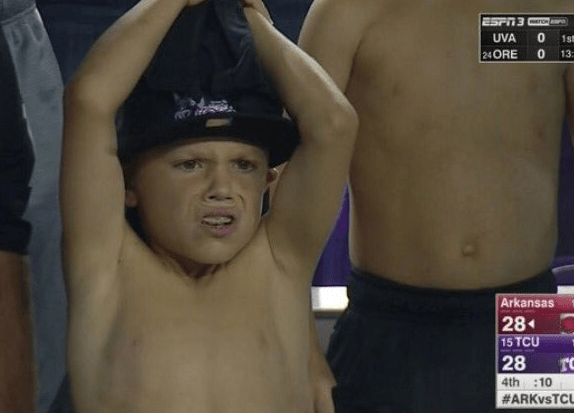 “Mens don’t do that Rusty, and mens don’t lay no sissified eggs out of their butt glands neither.” – Early Cuyler

I spent fourteen-hours watching football yesterday.  Here is a data dump of my ADHD riddled memory housing group.  Buckle up and grab that there bar over your head.

Louisville’s next opponent Florida State, defeated a skeleton crew of the appropriately named Buccaneers of Charleston Southern which suspended 14 of their players who used left-over allocated NCAA book money to plunder calculators and trapper keepers TM in the university’s bookstore.  The major development from this game is that FSU’s superhuman true sophomore safety Derwin James inured his knee in the second-half and ended up being carted into the locker room.  Nole nation now holds its collective breath as it awaits the MRI results.  If James, who is affectionately known as “Murderball” to FSU fans, can’t go the ‘Cards will dodge a major bullet next week.

Clemson continued it’s lethargic groping through the early stages of the 2016 season yesterday, as it stumbled past Troy in the friendly confines of Tiger Stadium.  The game really wasn’t as close as the final score, which should have been 37-24, but true sophomore Ray-Ray McCloud prematurely flipped the ball before the goal line at the end of a shifty 75-yard punt return.  Troy pounced on it in the end zone and what should have been a touchdown became a touchback.

The takeaway from this game is that Clemson’s offensive line looked shaky and DeShaun Watson appeared very human completing only 27 of his 53 pass attempts for 292 yards while throwing two picks and three interceptions.  Last season saw Watson get off to a slow start so as well so there is no need to make any wild proclamations at this point about his demise.  My money is on that offensive line making some adjustments and the experienced Clemson offense which returned 8 starters from last year will get going again.

In an exemplary display of #goacc football, Wake Forest managed to not lose to Duke at Wallace Wade in front of 21,077 sleepy basketball fans.  Duke missed two filed goals (30,43), fumbled away their opening drive of the second half on their own 14, and threw a red zone interception in Wake territory with 3:50 left in the game to seal the loss.

Wake Forest found a new starting QB in this one, as Kendall Hinton supplanted John Wolford who lost his spot after fumbling while getting sacked with 11:53 left in the second quarter.  Hinton came in and hooked up with freshman fullback Cade Carney on three touchdown hand-offs, one of which went for 55-yards and the winning touchdown that put the Deacs up for good 21-14.  All jokes aside, Hinton looked adequate throwing for 133 yards on 6 for 11 passing and one interception while running for 63 yards on 11 carries.  Cade Carney finished with 63 yards on 11 rushes and 3 touchddddddddddd …. Sorry I nodded off for second.

Pitt, at least in its current state, is simply not good enough to be Penn State's rival. We deserve better. https://t.co/2o9M5VFKJ9

Louisville’s own beloved fan blogger Mark Ennis responded with this:

Big picture, if Penn State wants a rival that resembles the program, they should schedule Baylor.

Pitt also responded with 341 yards rushing and three touchdowns, paced by James Conner’s line of 22 carries for 117 yards and a score.  The Nittany Lions roared back with 18 fourth quarter points but a Trace McSorely pass was snared in the end-zone by the capable hands of Pitt cornerback Ryan Lewis with just over a minute left.  This was the game of the week as far as I’m concerned and a great renewal of a classic rivalry, fan blog arrogance be damned.

Those were the only ACC games I watched but here is a rapid rundown of the rest of the action:

Tennessee defeated Virginia Tech in the infield of a NASCAR stadium half a mile away from the nearest fan in attendance.  From what I gathered Tennessee won in its usual fashion, by the opposing team shooting itself in the foot with unforced errors.

The Delaware-Maryland-Virginia area (DMV) is a college football recruiting hotbed, just not for the teams that play football in Virginia.  The Hoos fell flat against the Ducks in Eugene, accounting for their 35th loss over the last five seasons bringing their overall record to 15-35 in that time span.

The good news?  Miami’s line did a good job paving the way for a dominant ground attack that produced 279 yards on 39 carries, five touchdowns, two individual 100-yard rushers in Mark Walton (17 for 155 yards and four touchdowns) and Joseph Yearby (20 for 122 yards and one score).  The bad news?  Brad Kaaya (of “Bye-Felicia” fame) looked paralyzingly mediocre, turning in a 17 for 31, 179 yard, 2 interception, and 0 touchdown performance.  The ‘Canes travel to Boone, NC next week to face the giant slaying Appalachian State Mountaineers in Kidd Brewer Stadium, a game with the potential to become the signature loss of Miami’s 2016 season, and the beginning of the Hurricanes’ football-alumni-driven-mutiny of Georgia cast-off helmsman Mark Richt.

UNC bounced back from a loss to Georgia where they blew a ten-point fourth quarter lead, outscoring the Illini 24-7 in the second half after going into the locker room up 24-16.  Mitch Trubisky was precise completing 19 of his 24 passes for 265 yards and two touchdowns without turning it over.  The Tar Heels will have to tighten up their run defense if they want to win the Coastal again this year.  They were gashed for 116 yards on 15 carries by sophomore Ke’Shawn Vaughn, who was held to 49 yards on 17 carries last week by Murray State.  UGA also ran roughshod over the Heels’ hides last week, as Nick Chubb tested his surgically repaired knee against Carolina to the tune of 222 yards on 33 carries and two touchdowns.  With teams like Miami and Pitt establishing their identities as power running teams this season, and Georgia Tech’s triple-option attack on the schedule, UNC better figure something out fast or their going to get trampled by their Coastal foes.

When I was a Marine stationed in Cherry Point, North Carolina, Greenville was “off-limits” and any jarhead caught on ECU’s campus during the weekend was subject to non-judicial punishment.  NC State would be wise to adopt the Marine Corps’ policy in regard to visiting Greenville.

I have more important things to right about. Georgia Tech is 2-0.

Steve Addazio’s dudes got their first win of the season thanks to offensive coordinator Scott Loeffler’s intrepid venture into the forward-pass era.  Pattrick Towles aka Patty Ice aka Hall of Fame MLB pitcher/former United State’s Senator Jim Bunning’s grandson, threw for 329 yards and two touchdowns on 23 of 39 passing.  He also tossed his standard two interceptions in the contest.  BC travels to Blacksburg to face VT next week.

That wraps up the ACC, here are some other games of note:

Leonard Fournette sat this one out, as did the Tiger’s passing game (again), but Derrius Guicce led the team to a win on the strength of his 155 yards on 19 carries and a score.

This game was tied 0-0 at the end of the first quarter.  Exit Brandon Harris enter Danny Etling and LSU’s offense roared to a passing touchdown of the 46 yard variety and a 6-0 lead.  The extra point was blocked.  That was the highlight of the Tigers’ passing attack as the vortex of ineptitude continued to swirl, finishing the game with only 8 completions.   This game was a snoozer but there was a nifty punt return nestled in between all incompletions and Guicce runs.

Staying with the swirling vortex of ineptitude theme, Kentucky wins this week’s SEC passing offense race to the bottom by managing only three completions. That an’t a typo jack, they completed three passes all game to go along with three interceptions.  The offense as a whole only generated 149 total yards, 65 of which occurred in garbage time.  Here’s a summary of what happened to the Cayuts in Gainesville yesterday:

Someone Starts Go Fund Me Page for Mark Stoops’ Buyout

Sources tell me that account has been removed but speculation remains that Stoops may not survive the season.

Southern Mississippi offensive coordinator Shannon Dawson, who was jettisoned from Kentucky after last season in favor of Eddie Gran, dial up 615 yards of total offense against Savanna State.

Remember Ronald Ollie from Netflix’s Last Chance U? He plays for Nichols State. That’s a feel good story, Georgia’s performance was the opposite.  Georgia almost lost to Nichols State, but the Colonels failed to stop UGA on two third downs at the end of the game and the Bulldogs ran out the clock.  Nick Chubb was held to 80 yards on 20 carries, looking at you Gene Chizik and the North Carolina defense.

This game was right up there with Pitt v. Penn State, but my Pennsylvania roots may have swayed my vote.  Anyway, this game saw Kenny “Trill” Hill lead a ferocious fourth quarter surge that point 21 points on the board.  With two minutes left in the game and down 28-20, Arkansas drove 58 yards for a score and converted the two point conversion to tie the game with one-minute left.  TCU could have won this in regulation but Ryan Graf’s 28 yard field goal attempt was blocked and the game went into free football mode.  Both teams exchanged touchdowns in the first overtime but Arky would hold the Frogs to a FG in the second OT before quarterback Austin Allen powered across the goal line for a five-yard game winning touchdown.

In the outrage fest of the week, Central Michigan won the game in dramatic fashion on a hailmary hook and ladder.

Central Michigan won on a bananas play, but it probably shouldn't have happened https://t.co/RXtPVr3bdg https://t.co/dER6MEMbuW

Turns out that only the play before this, Oklahoma State had intentionally grounded the ball on fourth down which should have resulted in a run-off penalty that ended the game.  Well the refs erred and decided that CMU was to be awarded an untimed possession instead and the Chippewas did the improbable.  While Oklahoma State fas were understandably livid, if you don’t want the refs to decide the game, don’t put yourself in that situation.

That’s enough for now, but I have more in store, be on the look out for another national review piece from last night.  Here’s a teaser: