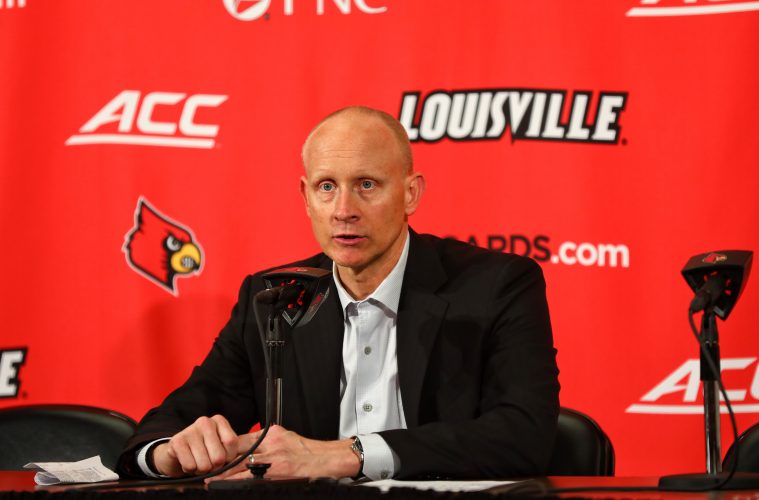 University of Louisville men’s basketball head coach Chris Mack spoke to the media on Thursday afternoon via teleconference. Coach Mack discussed the addition of two highly skilled guards and the future of his team.

“As you know the transfer portal is always fluid,” Mack stated when asked about the need for a big man.  “The last thing we want to do is take a student-athlete or player that’s not capable of helping us.  We will determine the best course of action as days develop, and continue to try to get the best player we can for our roster. That’s a need that we think we have but we also have plenty of capable players and if we have to play differently we will do that. Again, we’re not going to take a player that’s not capable of helping us.”

Mack talked about the loss of Jay Scrubb with his decision to sign with an agent and pursue the NBA Draft which led to the addition of Charles Minlend.

“It did happen awfully fast,” Mack said.  “It’s one of those thing where we received word from Jay’s father that he would not be attending Louisville that he would be signing with an agent and enter the NBA Draft.  At that point, we convened as a staff like we are here today and put all the options on the table and tried to figure out someone that can help us in the backcourt.  My assistants and I poured over tape, looked at who’s available in the transfer portal and Charles’ name quickly surfaced. Although he had cut his list recently, I still thought that there might be a willingness for him to hear us out, knowing that there wasn’t really a school east of Butler on his list.  We knew that he was from North Carolina, grew up in the heart of the ACC, so Coach Gaudio made a couple phone calls and low and behold I was able to get Charles on a facetime call on Friday. It lasted about an hour and 10 minutes of so.  I thought we had a really healthy and productive conversation. We talked about how there was such an immediate need after what had transpired with Jay the day before. I think he was excited about the conversation and that quickly turned to a scheduling a zoom virtual visit with myself and coach Gaudio on Saturday evening.  It was apparent after we got off the virtual call with Charles’ family that there was even more interest.  His dad texted me several times and Charles did as well and by late Saturday night I felt it could move in our favor.  They decided to speed up their decision date from sometime the following week to actually Sunday night.  Coach Gaudio and I had a few conversations to say the least, hey I think we might have broken ground here and gotten through and showed him the opportunity we have here at Louisville. By about Sunday morning or Sunday afternoon I felt the decision was imminent that Charles was going to be a Cardinal Sunday night and that’s exactly what happened.”

Mack went on to talk about the addition of Jones and Minlend and how they will help the Cardinals.

“I think what they add first and foremost is experience,” Mack stated.  “I think they add, both of them, an element of toughness. Just in talking to coaches that coached against them, and coaching staffs that battled against those guys for a number of years, they felt like both Charles and Carlik brought a lot of toughness to the table both mentally and physically. Carlik’s a guy that for his entire high school career was overlooked. I’ll be honest with you, I was one of those guys. He was right in my backyard and obviously we didn’t recruit him hard at Xavier. He always had a chip on his shoulder and always tried to prove people wrong. It was interesting in talking with Charles, you felt the same way. He actually had more offers out of high school, as a senior, than he did after his prep school year. He had a great prep school year at Fork Union Military Academy and the team won a ton of games. The opportunities just weren’t there like out of high school. Both of them carry a chip on their shoulder and that’s one of the biggest things that you can have defensively, is a desire. I’ll also tell you that they’re both extremely smart and they’re excited about the challenge of playing here at the next level. It’s up from where they’ve been before. I’d like to think they’re going to bring that type of energy and that type of effort, which it takes on the defensive end. And, a little bit of that spirit of like I said of feeling like they were overlooked.”

Mack went on to talk about the Cardinals need in the backcourt after the departures of Fresh Kimble, Ryan McMahon and Darius Perry.

“Well, we certainly needed help in the backcourt,” Mack said.  “When you graduate as many guys as we did, and you lose guys both to transferring, and a guy that signed the national letter who doesn’t show. Then you’re talking about a number of minutes that we needed to get replaced so we felt like one of the question marks of our team, a year ago, although we had a great season. We were top 10 in the country almost the entire year. I can’t tell you the number of articles that surfaced about our point guard play. So that was something that we felt like with David’s (Johnson) year of experience going from freshman to sophomore year. That he would be a much better player as a sophomore. We also felt like we needed to get him and Josh (Nickelberry) some help. So we ended up getting Carlik (Jones), so that was a big part of it. He’s a guy that can control the game, he plays at a great pace, is a terrific decision maker, and could score it. Then Charles (Minlend) provides that ability to guard the back court as well, and a guy that as you saw in the West Coast Conference Tournament, had a great tournament and had a really good career at San Francisco. He scored a lot of points, and had to create a lot on his own and with David and Carlik, I like to think that a lot of the creating in the backcourt can be done by those two guys and Charles won’t have as much on his plate. But we really needed help in the back court based on who we lost.”

“I think it will certainly have an impact,” he said.  “I feel like it will be not the impact, that maybe a story or two or the narrative becomes. It’s a little more minimal than maybe what gets publicized. There aren’t many Jalen Greens quite honestly. Not only talent wise but for everyone that is as talented as Jalen, and has the options that Jalen as there are guys that do choose the college route. I don’t see it becoming something where you’re talking about 25 to 30 guys a year, but more a handful of guys. You can go back in time and there are always a handful of guys that didn’t qualify academically. There are always a handful of guys that maybe went a different route. Overseas, I don’t think especially in the world that we live in now, as an option is as true in terms of it happening a whole lot. I think the G-league is doing a great thing for kids that just do not want to go to college. There are a ton of kids that still want to go to college and have the ability to play. I do believe the NCAA, once we get through all this Corona Virus, is going to start making steps towards name, image, and likeness that can maybe even that playing field. There’s always going to be kids that want to go onto the pros. I’m glad the G-league is able to offer that opportunity for those very few select kids that do that.”

Mack said he is not concerned when the players will return to campus because everyone is in the boat and everyone is in this together.  He also discussed the 2021 recruiting and how COVID-19 has impacted AAU events and evaluating players.

“I think like football staffs do, we spend a lot of time watching tape on student athletes that we didn’t have a chance to see during the year,” said Mack.  “My assistants did a great job throughout the course of the season, and going and seeing a ton of different kids all over the country. We feel like we have as good of a handle as we can on the 2021 class. I myself saw a lot of kids play throughout the year. You would like to have seen them four, five and six times, which is what April evaluations generally give you. Which is what the June team camps allow you to do. The same thing with the July recruiting period. There will be a recruiting period, I believe, and now whether that is remotely like we’re doing now. Where kids are playing sometime in July or August or September, who knows. If not, then we’ll have to do the best we possibly can. Watching a ton of tape, and like I said fortunately we had a lot of kids on campus and at the same time, saw a lot of kids play this year in the 2021 class.”