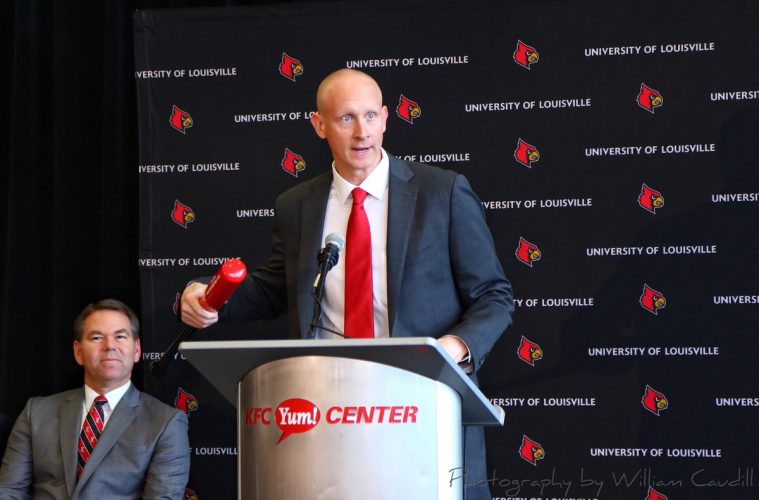 Chris Mack, whose teams have participated in the NCAA Tournament in eight of his nine seasons as a head coach, has been selected as the head coach of the University of Louisville men’s basketball team.

In nine seasons as the head coach at Xavier University, Mack guided the Musketeers to a 215-97 record and eight NCAA Tournament appearances (the last five straight years), including reaching the Sweet 16 on four occasions and the Elite Eight in 2017.  His teams won or shared three conference regular season championships while compiling a 105-49 league record over nine seasons in the Big East and Atlantic 10.

Among active coaches, Mack’s .689 winning percentage as a head coach ranks him 19th in the nation and his 215 victories are tied for the 11th-most ever amassed by a coach in their first nine seasons.

His most recent 2017-18 squad achieved a 29-6 record, won Xavier’s first Big East Conference regular season championship and earned the school’s first-ever No. 1 seed in the NCAA Tournament.  Mack was honored as the 2018 Big East Coach of the Year, NABC District 5 Coach of the Year, and he became the all-time coaching wins leader with the Musketeers.  Xavier finished third in the final Associated Press poll – its highest ever ranking — and this year’s team was one short of the school record for victories.

Mack, 48, received the 2016 Henry Iba Award as the U.S. Basketball Writers Association (USBWA) National Coach of the Year while also earning the CBS Sports and Basketball Timesmagazine National Coach of the Year awards that season.  He led Xavier to a 28-6 record in 2015-16 and achieved a No. 2 seed in the NCAA Tournament and a No. 5 ranking in the final AP poll, which at the time was the school’s highest seed and ranking in school history.

Born Dec. 30, 1969 in Cleveland, Ohio, Mack was the 2010-11 Atlantic 10 Conference Coach of the Year in his second year as a head coach. In addition, he was the recipient of the 2011 Skip Prosser Man of the Year award, which was established in 2008 to honor those who not only achieve success on the basketball court but who display moral integrity off the court as well.

He was the 2009-10 Basketball Times Rookie Coach of the Year when, in his initial year, he guided Xavier to a 26-9 record, shared the Atlantic 10 Championship and advanced to the NCAA Sweet 16.

Mack served as a court coach for the 2016 USA Basketball Men’s U18 National Team training camp in the summer of 2016 at the United States Olympic Training Center in Colorado Springs, Colorado.

Before rising to a head coaching position, Mack was a part of successful staffs throughout his career.  He spent five seasons as an assistant on Sean Miller’s Xavier staff (2004-09) after serving on the staff of the late Skip Prosser at Xavier as director of basketball operations (1999-01) and as an assistant coach at Wake Forest (2001-04).

In 10 seasons as an assistant or operations director, he helped his teams produce a 229-96 record (.705), win four conference regular season titles and one league tournament championship, and secure eight NCAA Tournament appearances, advancing to three Sweet 16s and one Elite Eight.  Those teams won at least 20 games in nine of the 10 seasons.

Mack began his coaching career in 1993 as the junior varsity girls basketball coach at McAuley High School in Cincinnati.  He was the varsity girls basketball coach at Mount Notre Dame High School in Reading, Ohio for four years (1995-99), directing the team to four straight sectional titles and earning Cincinnati Post Coach of the Year honors in 1996.

A 1992 Xavier University graduate with a degree in communication arts, Mack was a two-time team captain as a player at Xavier under then head coach Pete Gillen. He won the 1993 Midwestern City Conference (MCC) regular season championship (12-2 record) and reached the second round of the NCAA Tournament.

Mack was the 1987-88 Cincinnati Post Metro Player of the Year at St. Xavier High School in Cincinnati before going on to start for two seasons at Evansville under Jim Crews, winning an MCC Regular Season Championship and a trip to the second round of the 1989 NCAA Tournament as a freshman at Evansville. He transferred to Xavier after his sophomore season.

Mack and his wife, Christi, have two daughters, Lainee (12) and Hailee (11), and a son, Brayden (3).  A native of Louisville, the former Christi Hester was the runner-up for Kentucky Miss Basketball as a senior at Holy Cross High School.  She played basketball at the University of Dayton, where she scored 1,268 career points and was later inducted into the university’s Athletic Hall of Fame in 2014. She served as the Director of Basketball Operations for the Xavier women’s basketball team (2001-03) and more recently as the head girls basketball coach at Cincinnati’s Colerain High School Cardinals.

Mack and his wife created the Mack Family Foundation in 2016, a family-centered foundation whose mission is to serve, inspire and aid less fortunate children.