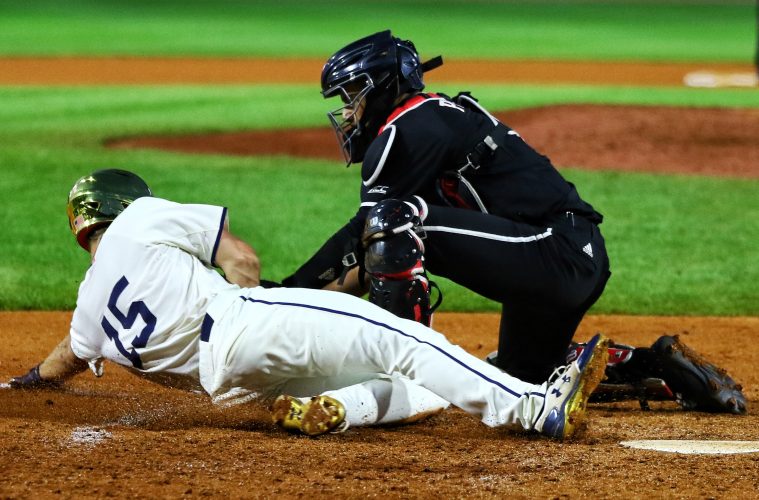 Colby Fitch equaled a career high with four RBIs as the No. 7 national seed Louisville baseball team opened the 2017 College World Series with an 8-4 win over Texas A&M on Sunday afternoon at TD Ameritrade Park Omaha.

The victory was the first for the Cardinals (53-10) at the CWS since a 12-4 victory against Mississippi State on June 17, 2007 at Rosenblatt Stadium. Louisville, which moved to 1-0 at the CWS for the first time in school history and improved to 6-0 in this year’s NCAA Championship, will play a winner’s bracket game against either No. 3 Florida or No. 6 TCU on Tuesday at 6 p.m., CT on ESPN.

A junior catcher from Rocheport, Missouri, Fitch drove in four runs for the third time in his career and was 2-for-4 with a double at the plate for the Cardinals, who plated five runs in the second inning and never trailed against the Aggies (41-22). Sunday’s performance marked the second straight multi-hit game for Fitch, who was 3-for-5 with a RBI in the NCAA Super Regional win against Kentucky on June 10.

Senior Colin Lyman added two hits, scored twice and had one RBI, while junior Devin Hairston was 2-for-3 with a walk, one RBI and a run scored. Devin Mann chipped in with a hit and one RBI, while both Drew Ellis and Brendan McKay had singles and scored runs for Louisville, which has earned both of its CWS wins on Father’s Day.

On the mound, McKay moved to 11-3 on the season and 32-10 in his collegiate career after surrendering four runs on eight hits with six strikeouts in 5.0+ innings. After the Aggies had cut the Louisville lead to 5-4 to begin the sixth, sophomore righthander Sam Bordner shut down the comeback with three perfect innings of relief before turning the game over to junior righty Lincoln Henzman in the ninth. The 2017 Stopper of the Year needed just nine pitches to retire all three batters he faced to close the game.

In his three NCAA Championship appearances this season, Bordner has not allowed a hit or run while registering 10 strikeouts and just two walks in 8.2 innings. For the season, the Baltimore, Ohio native has a 0.43 ERA and 36 strikeouts in 41.2 innings and 22 total appearances, all out of the bullpen.

The Cardinals gained control early in Sunday’s game scoring five runs on six hits while chasing Aggies starter Corbin Martin in the second inning. Playing in front of a crowd of 23,437, Louisville opened the frame with four straight singles as McKay led it off with his single to left. After moving to third on a single to right by Ellis, McKay scored on a RBI single through the left side by Hairston. Lyman followed with a RBI single to left field to plate Ellis for the 2-0 lead.

Later in the inning, Fitch delivered a two-out, two-run single to right field to score Hairston and Lyman. Following a Texas A&M pitching change, Mann greeted Brigham Hill with a RBI single to left field to plate Logan Taylor as the Cardinals scored four or more runs in an inning for the 26th time this season.

The Aggies cut into the Louisville lead with a pair of runs in the fourth inning as Walker Pennington delivered a RBI sacrifice fly to center field and George Janca added a RBI single up the middle. Texas A&M pulled closer with two more runs in the top of the sixth inning against McKay. Blake Kopetsky connected on a RBI double to left center and Pennington followed with a RBI single to right center to narrow the Cardinals lead to 5-4.

Louisville halted the momentum for the Aggies with two runs in the bottom of the sixth to extend the margin to 7-4. After loading the bases with one out, Taylor drove Lyman home with a RBI fielder’s choice to Aggies second baseman Braden Shewmake, whose throw to second for an attempted force out pulled shortstop Austin Homan off the base and kept the bases loaded. Fitch followed with a walk against Cason Sherrod to send Josh Stowers home for the second run of the inning.

The Cardinals added their final run of the game in the eighth inning on a RBI double from Fitch to score senior Ryan Summers. Freshman Justin Lavey led off the inning with a pinch hit single through the right side before Summers pinch ran for him. After moving to second on a sacrifice bunt by Taylor, Summers scored on Fitch’s two-bagger down the left field line.

Martin took the loss for Texas A&M and dropped to 7-4 on the season after allowing five runs on five hits in 1.2 innings. The Aggies will play the loser of Sundaynight’s Florida-TCU game in an elimination game on Tuesday at 1 p.m., CT.