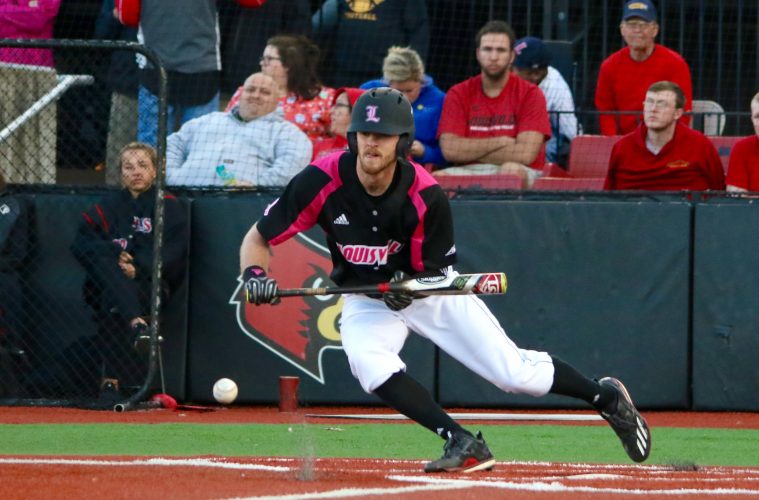 Junior Brendan McKay and senior Ryan Summers had three hits each on Tuesday as the No. 2 Louisville baseball team cruised to an 11-1 win over Western Kentucky on Cancer Awareness Night at Jim Patterson Stadium.

Five different Cardinals finished with at least two hits as Louisville (22-2) jumped to a three-run lead after two innings and never looked back in winning its 36th consecutive regular season home game. McKay finished 3-for-4 with a double, one RBI and scored twice, while Summers was 3-for-3 with a double and two runs scored. Junior Devin Hairston added two hits and two RBI, freshman Tyler Fitzgerald was 2-for-4 with a triple, one RBI and scored once and senior Colin Lyman chipped in with two hits, one RBI and one run.

On a staff day for Louisville’s pitchers, senior righthander Shane Hummel earned the win after surrendering just one run on four hits with one strikeout in 3.1 innings in his third career start. Hummel, who moved to 2-0 on the season, was followed by five different Cardinals who combined to allow just two hits in 5.2 innings of scoreless relief. Tuesday’s performance marked the 16th time in 24 games this season Louisville has limited an opponent to two or fewer earned runs.

The Cardinals broke through for a run in the first inning on Tuesday after junior Colby Fitch doubled to right center before scoring on a RBI single by Hairston. Louisville pushed the lead to 3-0 with a pair of runs in the second inning on a RBI groundout by Fitch to plate Fitzgerald and a RBI single from Hairston to send Summers home.

WKU (9-17) cut into the margin in the third inning when Colin Currie tripled down the right field line and scored on a RBI groundout by Kevin Lambert. The Cardinals answered with two runs in the fifth inning as McKay scored on a RBI sacrifice fly from sophomore Devin Mann and Fitzgerald drove Lyman home with a RBI triple to left center.

Louisville added to the lead with a run in the sixth inning on a RBI single to left field by Lyman to send McKay home. A pair of WKU errors pushed across two runs in the seventh before McKay connected on a RBI double to send Fitch home. The Cardinals added their final two runs of the night in the eighth inning as senior Michael Bollmer drove freshman Logan Wyatt in with a RBI single and Fitzgerald scored on a wild pitch.

Up next, the No. 2 Cardinals return to the road for a weekend series at No. 16 Virginia, which kicks off on Friday at 6 p.m., ET in Charlottesville.