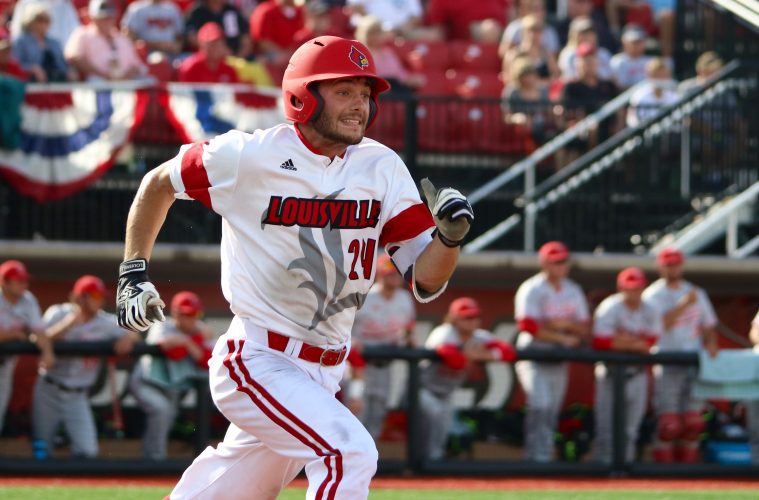 Nick Bennett delivered a strong performance on the mound as the No. 2 Louisville baseball team completed its eighth series sweep of the season and won its 15th straight game overall with Sunday’s 6-4 victory over No. 7 Clemson at Doug Kingsmore Stadium.

A freshman lefthander from Cincinnati, Ohio, Bennett improved to 5-0 on the season and has a 2.47 ERA with 55 strikeouts in 11 starts and 58.1 innings overall. The seven strikeouts on Sunday equaled the season high for Bennett, who also had seven in his first career start against Eastern Michigan on March 3.

Senior righty Jake Sparger backed up Bennett with 1.2 innings of shutout relief before junior righthander Lincoln Henzman twirled a scoreless ninth inning for his second save of the weekend and the 16th of the season. The Lexington, Kentucky native moved into a tie for third on Louisville’s single season saves leaderboard matching Nick Burdi’s 2013 total, while the 19 career saves for Henzman is tied for third all-time equaling Neil Holland’s total from 2008-10.

Logan Taylor led a balanced effort at the plate for the Cardinals as the senior was 2-for-4 with a run scored, while Drew Ellis added his second home run the weekend and the 15th of the season. Along with matching Brendan McKay for the team lead in homers, Ellis also leads Louisville with a .399 batting average, 48 RBI, 18 doubles and a .754 slugging percentage. Devin Mann added a RBI single, Colby Fitch singled, drove in a run and scored once, Ryan Summers doubled and scored and Josh Stowers singled and scored.

The Cardinals opened the scoring Sunday with a run in the top of the first inning when Devin Hairston drove Taylor home with a RBI sacrifice fly to right field. Clemson gained its first lead of the afternoon with a pair of runs in the bottom of the first, including one unearned, on a two-run homer by Chase Pinder. Following an error by the Cardinals on a flyball off the bat of Reed Rohlman, Pinder sent a 2-2 pitch into the left field seats for his sixth home run.

Louisville answered with a pair of runs in the second inning to regain the lead at 3-2. Ellis led things off by sending the first pitch of the inning from lefty Pat Krall down the left field line and off the foul pole for his 18th career round-tripper. Later in the inning, Stowers singled to left and moved to second on a wild pitch before scoring on an error by Tigers third baseman Grayson Byrd, who could not haul in a liner off the bat of Summers.

The Tigers evened the score at 3-3 in the third with another unearned run after the Cardinals committed three errors in the inning. Logan Davidson reached base on an error, moved to second on a single by Rohlman and advanced to third on another Louisville error before scoring on a RBI sacrifice fly to right by Chris Williams.

The Cardinals took their third lead of the afternoon in the sixth inning on a two-out RBI single from Mann to score Fitch for the 4-3 margin. Fitch led off the inning with a single to right field and moved to second on a sacrifice bunt from Hairston. After moving to third on a deep flyout to right by Brendan McKay, Fitch scored when Mann sent a 2-2 pitch through the left side.

The teams exchanged runs in the seventh inning to move the Louisville lead to 5-4. Summers doubled down the left field line, moved to third on a single by Taylor and scored on a RBI sacrifice fly to right by Fitch. The Tigers plated their run in the seventh on a solo home run to left by Davidson. Louisville added its sixth and final run of the afternoon in the eighth inning when Tyler Fitzgerald, pinch running for McKay after his single to right, scored from third on a balk by Tyler Jackson.

Up next, No. 2 Louisville will begin the final week of the regular season with a visit to Indiana on Tuesday at 6 p.m., ET and the game will be televised on the Big Ten Network.