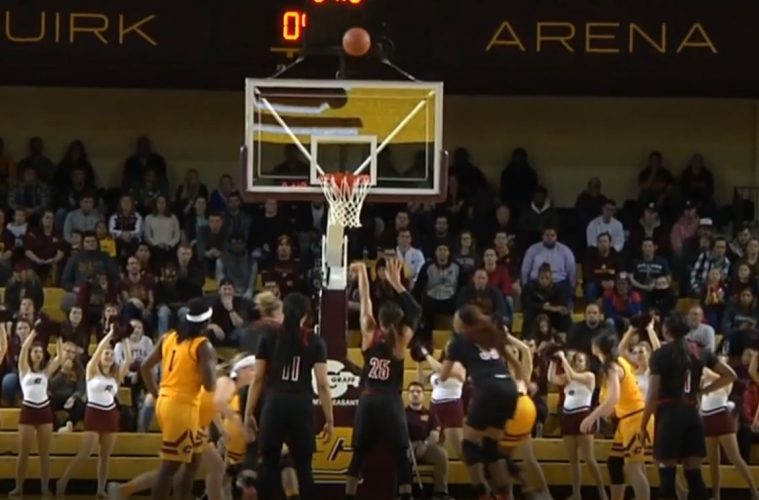 Cards Sweat It Out In Central Michigan 72-68

The previous time Jeff Walz brought his team to Central Michigan the then 23rd-ranked Cardinals were sent home with a loss and a bruised ego. Before tonight’s game against the Chippewas in Mount Pleasant, Coach Walz made it clear that he’s not one to shy away from a fight. And a fight is exactly what he found at a McGuirk Arena filled with every ugly Christmas sweater to ever be conceived.

Junior Bionca Dunham and senior Sam Fuehring led the way for the Cards in the first half, combining to take the demand off a strangely quiet Asia Durr. In the opening quarter the Cards out-shot the Chippewas 52.9% to 35.7% from the field but it was in spite of a number of easy and open missed shots from low in the paint. CMU sophomore guard Micaela Kelly’s efforts from beyond the arc combined with given fouls had the Cards up only four at the end of the quarter one.

It was more of the same in quarter two, as Asia’s relative slump continued. That slump seemed to extend to the other players, both Cardinal and Chippewa, as both squads finished with only eleven points in the quarter. But the true tale was a nine rebound advantage for CMU driven by senior standout and 2017-2018 MAC Tournament MVP Reyna Frost. Having been handily outplayed, if not outscored, the Cards took a precarious four point lead into the locker room.

Whatever Jeff Walz said, or Asia Durr drank, at the half should be bottled and sold as an alternative to energy drinks. Asia came roaring out of the locker room on her way to 26 second half points, but the Chippewas would not wither in the face of the onslaught. Reyna Frost took the reins from Micaela Kelly on her way to 22 points and 13 rebounds. Led by Frost, shades of 2009 began to haunt the Cardinals as CMU took the lead with 2:17 left in the third quarter. But the half ended tied at 49 thanks to a record-setting set of free throws from Asia Durr.

Fouled on a three point attempt with only seconds left in the half, Durr stepped to the line with 15 of the 18 points she needed to join the pantheon of Cardinal 2,000 point scorers. Calmly, smoothly, and with nary a look of doubt, Asia sunk all three to join the likes of McCoughtry, Schimmel, and Hines-Allen. But the work was not done and the Cardinals set out to complete the task in the fourth.

CMU, led by Frost and Kelly (19 points), remained hot from beyond the arc (10-27 / 37%) and it became a test of wills as the two teams fought back and forth. But upon regaining the lead, the Cardinals refused to relinquish it no matter how closely the Chippewas nipped at their heels. CMU senior guard Presley Hudson (First Team All-MAC, 5th in the country in scoring) cut it to one with 16.6 seconds left, but Asia Durr managed to coolly sink her free throws down the stretch. Sam Fuehring put the nail in the coffin with a free throw and only a couple of seconds remaining on the clock, and the Cardinals escaped Mt. Pleasant with a 72-68 victory.

The Cardinals now get a long holiday break, and will not be in action again until the new year. Jeff Walz and his 3rd ranked and undefeated squad will open ACC play against North Carolina on January 3rd at 7:00 PM. As for the Chippewas, they’ll head to sunny Florida for the Miami Holiday Classic before opening MAC play on January 5th. Not ranked but currently 44th in RPI, and after a 2017-2018 NCAA Sweet Sixteen appearance, it’s safe to say that nobody will want to draw CMU come March.