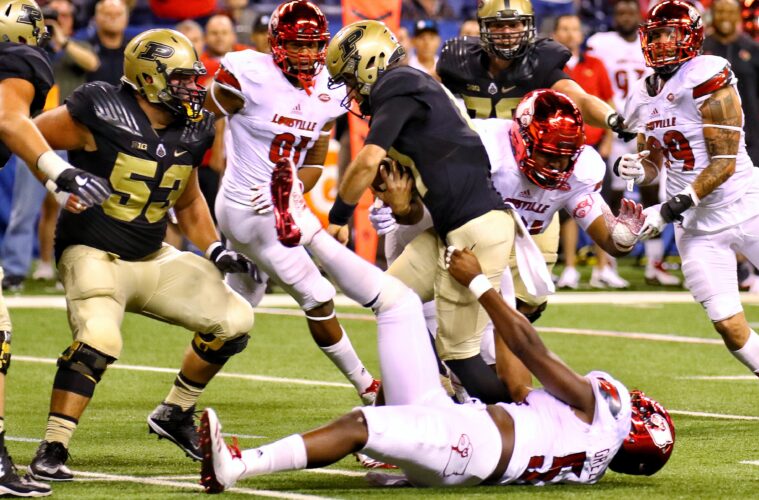 As defensive coordinator Brian VanGorder looks to retool a defense that must replace seven starters, University of Louisville head coach Bobby Petrino has been pleased with the results as the unit continues to search for leadership and consistency.

“I’m happy with where we are right now,” Petrino said. “I think our guys are working hard at learning. I’m pleased with the progress. Defensively, we are starting to get to know the package. Today was a good day because you go back and re-teach a number of things. We have good competition and a number of guys are doing a good job.”

In just five practices, VanGorder dialed up the pressure on defense and a coaching style to a group that looks to get better from a year ago. It’s an approach that the players have welcomed during a period of transition.

“It’s aggressive and he’s very demanding,” linebacker C.J. Avery said of the new defense. “He wants us to be the best we can be and he’s always pushing us to the limits. He’s going to challenge us every day and he’s very hard on us.”

Fans might need a program to recognize a lot of the new faces on defense, especially at the linebacker position, where a number of new players have emerged.

“I like the way our group is going,” Avery said. “Dorian (Etheridge) is our leader for us. We follow him and go out to compete every day.”

Etheridge, a freshman All-American last season, is the only player returning who started all 13 games a year ago – becoming the first freshman to lead the team in tackles in school history. The West Virginia native tallied 83 tackles – posting five games with eight or more tackles, including a career-best 14 versus Boston College.

“Dorian is a vocal guy,” Avery said. “He has to be playing the Mike linebacker. He has to lead everyone and he’s just doing a really good job there. He had a great year last year and has just carried it over.”

Looking to replace a number of key components, players like Avery and redshirt sophomore P.J. Blue have transitioned to the linebacker position. A highly recruited player, Blue suffered a pair of knee injuries that limited his playing time.

Healthy for the first time, Blue is excited about the move to the linebacker spot, but more importantly, he’s eager to put his injury troubles behind him.

“After my redshirt year, I was looking forward to contributing,” Blue said. “Tearing it again was disheartening, but I was excited to get back with my teammates. It was a journey. It was a hard process, but I’m just glad to be back out there to tackle.”

“It’s been good,” Avery said. “It’s always going to be a tough challenge when you have to learn a new defense. We all are taking the challenge. Everyone is doing a good job. We are all watching film together as a group and I like the way it’s going. I feel like we are going to be a good group.”

With the first game almost six months away, the Cardinals don’t need to be game ready right now, but there are aspects of the game they want to conquer this spring.

“I just want to be a better explosive football player,” Avery said. “Additionally, I want to see our defensive come together.”

For Blue, who has yet to see the field, he is taking a different approach.

“I just want to get the scheme down and get to learn my position,” Blue added.

The Cardinals will look to take another step forward on Wednesday afternoon for practice No. 6 of the spring.