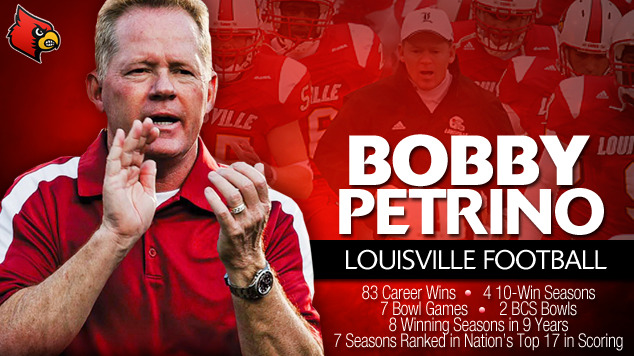 Wow. What a day.  Lots of information coming from Floyd St. I attended the Press Conference today introducing Bobby Petrino as Head Football Coach and there has been A LOT to take in.

I will have video of the ENTIRE Petrino Introductory Press Conference including comments from Tom Jurich and Bobby Petrino later.  But for now.  I will roll updates starting from yesterday.  I LIVE TWEETED the entire press conference as well and ended up in Twitter jail (too many tweets).

-The ULLA personnell committee ran a little late, but unaimously approved of the Petrino hiring.

-At the fan event, Petrino said to those in attendance: “They put lights on the scoreboard for ONE reason. To light them up. ”

-Tom Jurich confirmed that he interviewed Petrino for 9 hours, and said that if he (Jurich) were Petrino that he would have walked out of the interview in the first 30 minutes.

-Petrino said: “I’ve made mistakes both professionally & personally, something that I’m not going to do again. 1st mistake was ever leaving Louisville. This is my destination job.”

-We confirmed that Clint Hurtt will remain on staff.

-UAB Head Coach Garrick McGee will be the Offensive Coordinator.

-Bobby Petrino made a splash with his team right away.

-Jeff Brohm will be the Head Coach of Western Kentucky in replacement of Petrino.

-Petrino stated that he was emotionally & contractually tied to the Louisville job.

-Kevin Steele from Alabama will be Bobby Petrino’s Defensive Coordinator.

-Sherrone Moore also said goodbye to the fans today (1-10-2014) via Twitter.  It is expected that Pete Nochta will join the Cards to coach the TEs.

LOUISVILLE, Ky. – One of the nation’s best offensive minds is returning home.

University of Louisville Vice President/Director of Athletics Tom Jurich announced Thursday Bobby Petrino as the Cardinals’ football coach. The Cardinals’ head coach from 2003-06, Petrino led UofL to an unprecedented 41-9 record in four seasons on the sidelines and currently boasts an 83-30 record at the collegiate level.

During his time at Louisville, Petrino directed the program to a bowl game each year, but more significantly, guided the school to its first BCS game and victory – a 24-13 win over Wake Forest in the FedEx Orange Bowl. The 41 wins over that four-year span were the most in school history and featured an average margin of victory of 26.0.

Coupling his success at Louisville and Arkansas, Petrino has led his teams to seven bowl games in nine years, including both Louisville’s and Arkansas’ first BCS bowl games. His programs have achieved four 10-win seasons along with top-10 finishes nationally three times. His 2006 Louisville squad and 2011 Arkansas team concluded with No. 5 rankings in the Associated Press polls.

He also showed the ability to develop players, as Petrino had 14 selected in the NFL Draft during his time at Louisville, including Amobi Okoye, who was the 10th overall selection in 2007 by the Houston Texans. Eric Wood, who was recruited by Petrino, was the 28th selection by the Buffalo Bills in 2009. Michael Bush, a fourth-round pick by the Oakland Raiders, amassed 2,514 rushing yards in three-plus seasons with the Cardinals.

During Petrino’s time at Louisville, he coached the Bronko Nagurski and Ted Hendricks Award winner Elvis Dumervil, who led the nation in sacks (20) and forced fumbles (10) on his way to earning All-America honors in 2006. During that same season, Bush scored 24 touchdowns and became the school’s first 1,000-yard rusher since 1999.

As the head coach of three different programs, Petrino’s offenses have compiled a 100-yard rusher on 99 occasions and a 300-yard passer 66 times over the last 15 seasons.

Petrino directed the Cardinals to their first BIG EAST title in 2006, Louisville’s second year in the league. He guided that squad to a 12-1 record, which the 2013 squad tied for the most wins in school history. The Cardinals opened the year going 8-0, including a win over third-ranked West Virginia, and catapulted to as high as No. 3 in the nation. By the end of the season, Louisville finished with its highest ranking in school history, boasting the No. 5 rating in the Associated Press poll and No. 6 in the USA Today poll.

Petrino, first hired at Louisville in 2003, guided Louisville to a 9-4 record and became the first coach in school history to reach nine wins in their first season. That season, Louisville set six Conference USA records, including the mark for total yards after the Cardinals racked up 779 yards, 445 of which came on the ground, in a 66-45 win over Houston.

Prior to returning to Louisville, Petrino spent one season as Western Kentucky’s head coach, where he helped WKU finish the regular season with an FBS school record eight wins while closing the season on a four-game winning streak. The team also set a new school record for total offense (5,502 yards) and passing first downs (141) in a season.

Before joining the Hilltoppers’ program, Petrino spent four seasons at Arkansas where he led the Razorbacks to a 34-17 record, going 29-10 in his final three years.

The success of the 2009 season propelled Arkansas into the national spotlight in 2010, as the Razorbacks went 10-3, earning a bid to the Allstate Sugar Bowl against Ohio State — the program’s first-ever BCS bowl bid. Petrino followed up the 2010 season with a remarkable 11-win campaign in 2011, matching the single-season school record. Arkansas closed out the year with a win over Kansas State in the Cotton Bowl, boosting the Razorbacks into the No. 5 national ranking in the final AP poll.

On the individual stage, D.J. Williams claimed the school’s first-ever John Mackey Award in 2011, given annually to the nation’s top tight end.

Developing student-athletes has been a constant for Petrino, as he has worked with numerous players that have gone on to careers at the professional level, including an impressive track record developing quarterbacks. As a head coach, he helped develop Arkansas’ Ryan Mallett (2008-10) and Louisville’s Stefan LeFors (2003-04) and Brian Brohm (2004-06). As a coordinator or assistant, he tutored Jason Campbell at Auburn (2002), Chris Redman at Louisville (1998), Jake Plummer at Arizona State (1993), and Doug Nussmeier (1990-91) and John Friesz (1989) at Idaho.

Before earning his first head coaching job at Louisville in 2003, Petrino served one season as the offensive coordinator at Auburn in 2002. After one year at the helm of the Auburn offense, the Tigers went 9-4, including three wins over top-10 ranked opponents, and won a share of the SEC Western Division title.

Before his brief stint at Auburn, he coached three seasons in the NFL with the Jacksonville Jaguars, coaching the quarterbacks in 1999 and 2000, and one season as the offensive coordinator in 2001.

In his first spell at Louisville, he served as the offensive coordinator for the Cardinals in 1998. In that one year, Louisville was the top-ranked NCAA Division I-A team in scoring and total offense. Under Petrino’s tutelage, quarterback Chris Redman threw for a school-record 4,042 yards and 29 touchdowns while recording the biggest turnaround in the nation.

After serving as Nevada’s offensive coordinator in 1994, Petrino assumed the same role at Utah State for three years (1995-97) before going to Louisville. While in Logan, Utah, he helped Utah State set school records by averaging 468.5 yards of total offense and 317.5 yards passing during the 1996 season. Prior to his arrival, USU averaged just more than 300 yards per game in total offense. In 1996, the Aggies also racked up a school-record 273 first downs, an average of nearly 25 first downs a game.

In 1992 and 1993, he was the quarterbacks coach at Arizona State where he assisted in the development of future All-American and NFL star Jake Plummer. While with the Sun Devils, Petrino also worked with then-ASU quarterback and former UA offensive coordinator and quarterbacks coach Garrick McGee (current head coach at UAB).

Petrino officially started his coaching career as a graduate assistant for his father at Carroll College in 1983. After a graduate assistant stint as quarterbacks coach at Weber State in 1984, Petrino returned to be the offensive coordinator for his father in 1985-86. Carroll had the top-ranked offense in the NAIA ranks in both of his seasons, thanks in large part to the play of Bobby Petrino’s younger brother, Paul, who was a four-year starter at quarterback at Carroll College.

Before Bobby Petrino coached for his father, he played football for him at Carroll. Petrino played quarterback and twice earned NAIA All-America honors. He led the Fighting Saints to three straight Frontier Conference championships and was named the league’s most valuable player in 1981 and 1982. He also played four years of basketball at Carroll. Petrino earned a bachelor’s degree in physical education with a minor in mathematics from Carroll in 1983.