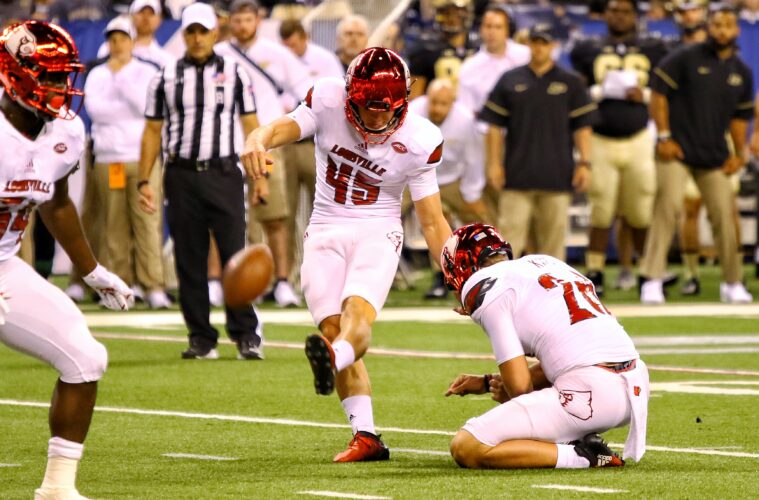 Mark BlankenbakerNovember 2, 2017
Football0 views
The Atlantic Coast Conference had three of the top 20 placekickers who were named semifinalists for the 2017 Lou Groza Collegiate Placekicker Award, the Palm Beach County Sport Commission announced Thursday.
The Groza Award is presented annually to the nation’s top placekicker.
Named from the ACC were Michael Badgley of Miami, Blanton Creque of Louisville and Cole Murphy of Syracuse.
Badgley, a senior from Summit, New Jersey, has made 12 of 14 field goals this season, including all 11 of his attempts from 40 yards out and a game-winning field goal against Georgia Tech. His only two misses have come from beyond 50 yards. He is also perfect on 26 PAT attempts.
Creque, a sophomore from Shelbyville, Kentucky, has made 11 of his 12 field goal attempts this year and is tied for third nationally in field goal percentage (.917). Creque is also perfect (nine for nine) inside of 40 yards. He is fourth among all placekickers nationally in career field goal percentage (.871).
Murphy, a senior from Castaic, California, has made 16 of 18 field goal attempts and his field goal percentage of .889 is the highest of any kicker in the nation with 16 or more attempts. He is third nationally in field goals per game, averaging 2.0.
In all, five kickers from current ACC schools have been named previous winners of the Groza Award a total of six times, including Roberto Aguayo of Florida State (2013), Graham Gano of Florida State (2008), Arthur Carmody of Louisville (2006), Sebastian Janikowski of Florida State (1998, 1998) and Marc Primanti of NC State (1996).
2017 ACC Groza Semifinalists:
Michael Badgley, Miami
Blanton Creque, Louiville
Cole Murphy, Syracuse
The following two tabs change content below.