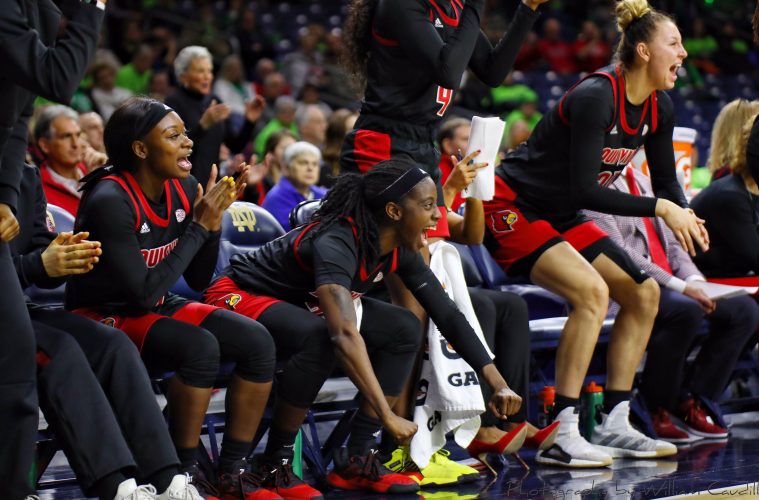 Jazmine Jones scored 19 points and No. 9 Louisville locked down defensively to beat No. 4 North Carolina State 66-59 on Thursday night in a matchup of the Atlantic Coast Conference’s top two teams.

Kylee Shook had 10 points, 10 rebounds and seven blocks for the Cardinals (22-3, 11-2 Atlantic Coast Conference), who arrived sitting a game back of the Wolfpack and coming off a rare set of consecutive losses. But Louisville handled the pressure of playing in front of a sellout crowd with composure, both in knocking down 48 percent of its shots, and more importantly, in taking the Wolfpack completely out of rhythm.

N.C. State (22-2, 11-2) entered the night with the program’s highest ranking since January 2000, but the Wolfpack shot just 32 percent, including 5 of 20 from 3-point range, after entering ranked in the top 20 nationally in 3-point percentage.

More specifically, the Cardinals used Shook – a 6-foot-4 senior and the ACC’s shot-blocking leader — to frustrate N.C. State’s Elissa Cunane inside. The 6-5 sophomore came in averaging 17 points and 10.5 rebounds, but finished with 10 points on 1-for-12 shooting.

Additionally, Louisville made things difficult on Wolfpack point guard Aislinn Konig. The senior came in as the team’s No. 2 scorer (11.1 points), but finished with just four points on 2-for-9 shooting.

N.C. State trailed by 14 in the first half and got as close as three twice in the fourth quarter, but the Cardinals landed what turned out to be a finishing blow when Jones knocked down a 3-pointer and Elizabeth Balogun followed with a layup on the next possession.

Shook followed with a layup moments later, capping a seven-point burst that gave Louisville a 60-48 lead with 4:09 left.

Louisville: The Cardinals were coming off losses at home to No. 14 Florida State and on the road to Syracuse, marking their first time with consecutive losses since February 2017. And they hadn’t lost three straight since the 2011-12 season. They responded well to that challenge Thursday.

N.C. State: The Wolfpack had a chance to stretch their ACC lead to two games while also claiming the head-to-head tiebreaker with the Cardinals as they pursue the program’s first league regular-season crown since the 1989-90 season. But N.C. State made just 3 of 16 shots in an eight-point opening quarter that had Wes Moore’s squad playing catch-up the rest of the night.