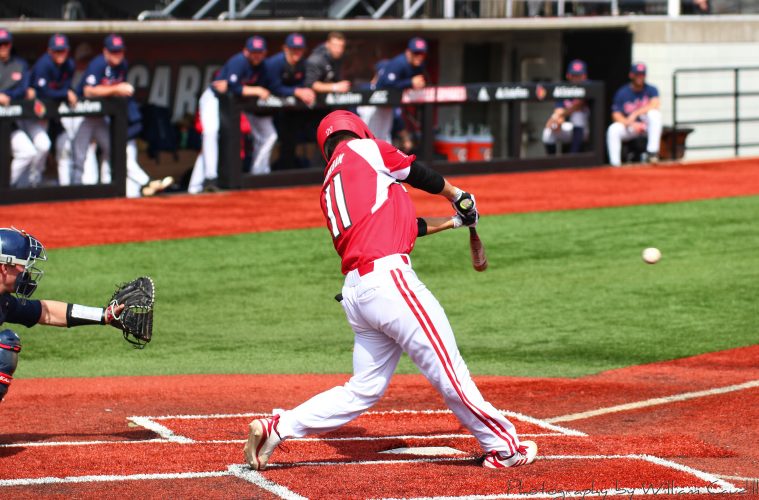 Things could not be trending in a better direction for the #4 Louisville Cardinals (16-4, 5-1). On top of sweeping the #7 Ole Miss Rebels (14-6) in a two game midweek series at home, they followed that up with yet another sweep, this time on the road against the #24 Duke Blue Devils (12-8, 2-4) this past weekend.

I have previously mentioned that in order for this team to make a truly deep run for the remainder of the regular season and into the postseason, they must start to form some cohesion between their pitching and hitting. I didn’t see them making such huge strides over the past week given the tough competition, but they certainly did so and are now primed to ride the momentum high from here on out.

From top to bottom, hitting was much improved. Over the last five games, they averaged 6.4 runs on 9.6 hits and plated 8 or more runs with double digit hits 3 times. Players such as Jared Poland, Alex Binelas, Zach Britton and Henry Davis have started to turn a corner, while players such as Danny Oriente, Tyler Fitzgerald and Logan Wyatt are still maintaining their high-productive pace.

Despite getting rattled at times, pitching was also excellent. This past week, the pitching staff produced a strikeout-to-walk ratio of 47-22, walked 2 or less batters three times, struck out 9 or more batters three times, and only allowed more than 3 earned runs once. With the batting order starting to become more and more complete as the season progresses, that combined with the stellar pitching staff will make Louisville Baseball a force to be reckoned with in 2019.

Coming up this week, Louisville will face the Eastern Kentucky Colonels (11-8) for a second time this season and follow that up with returning to Jim Patterson Stadium to continue conference play against the Georgia Tech Yellow Jackets (13-7, 3-3).

Louisville will start the week on the road in Richmond, KY for the midweek game on Tuesday, then return home for a normal slate of Friday-Sunday weekend games.

Adjusting the ticketed entry plan first featured last season, 17 of this season’s 34 home games will revert back to free entry. Tickets can be purchased here. In case you cannot make it to any of the games, you can catch the EKU game on ESPN+ and all three Georgia Tech games on ACC Network Extra. The EKU game can be heard on 1450 WXVW, while the Georgia Tech games are a day-of decision.

The key to beating Eastern Kentucky this time around is going to be the same thing it was last time when Louisville faced them in the home opener: have a faster paced and more aggressive offense. It sounds cliche, but when you have players such as Nick Howie, Christian Lucio and Will Johnson in the opposing dugout, plating runs and plating them often are going to be priority number 1. The main threat is without a doubt going to be Nick Howie. The junior outfielder leads the Colonels in batting average and on base percentage (.394 and .518). He is both an on-base and power threat, as he is barely second on the team in slugging percentage (.697) and leads the Colonels in home runs and RBIs with 5 and 17. Not to be outdone, Will Johnson also has 5 home runs but is also a menace to deal with on the base paths. The senior outfielder is a perfect 15 for 15 in stolen base attempts and has also drawn 22 walks. If the Louisville pitchers can limit the damage done by Howie and Lucio as well as keep an eye on Johnson at all times when he’s on base, they should be in good shape. As for pitching, like it was in the last matchup, the only real threat to deal with is right-handed reliever Aaron Ochsenbein. While starter Kaven Brown is a viable threat for the Colonels, he won’t be seeing action due to it being a midweek contest. Ochsenbein carries a goose egg of an ERA, with 21 strikeouts over his 13.2 innings pitched. If Louisville’s hitters run the starter out early, they’ll have to be well disciplined if they see Ochsenbein coming from the bullpen.

Danny Hall’s Georgia Tech teams have always had a knack for hitting the base, and this year’s Yellow Jackets are no exception. As a team, they are collectively hitting .291 (2nd in ACC) and feature a pair of players batting .400 and above. Sophomore Michael Guldberg might lead the Yellow Jackets in batting average with .516, but Kyle McCann dominates in every other offensive category. The junior catcher/first baseman has driven in a whopping 71 RBI and has more home runs than Louisville with 12 (Louisville has 113 RBI and 11 home runs as a team). With an on base percentage of .553 and an insane slugging percentage of 1.014, his OPS of 1.567 is 1st in the ACC. Even two-time ACC Pitcher of the Week Reid Detmers might have trouble putting away McCann. While they have a high flying offense, their pitching staff does not quite excel to those levels but still have solid starting options in the weekend rotation. Xzavion Curry, Connor Thomas and Brant Hunter have combined for a 3.59 ERA & 1.17 WHIP over 85.1 innings pitched, and have a strikeout-to-walk ratio of 102-16. Carrying their offensive momentum from the last week into this weekend’s series will be a crucial role in hopefully chasing the starting pitchers off the mound in these games.

I predict that after beating Eastern Kentucky at Richmond, Louisville will follow that up with their second straight conference sweep in the weekend series vs. Georgia Tech.