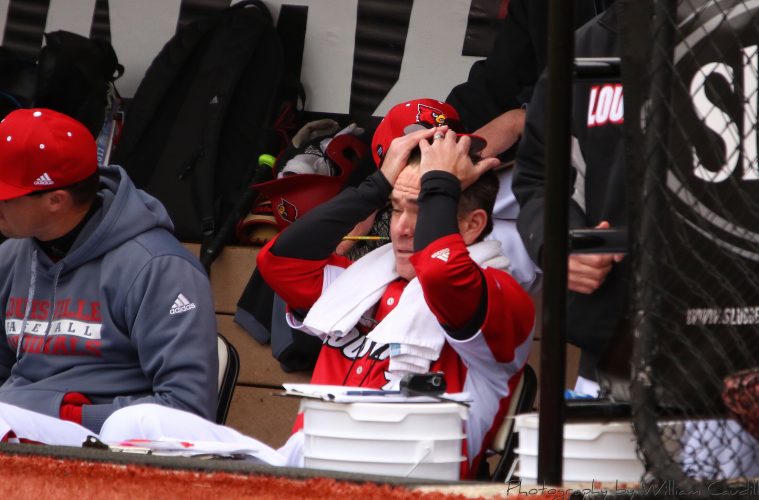 Reaching the midway point of the ACC schedule, Louisville’s struggles have continued to drag on, going 1-3 this past week. Round 1 of the Battle of the Bluegrass saw them taking an 8-5 loss to #9 Kentucky (22-10) in Lexington, with the Cardinal Nine following that up with their fourth consecutive conference series loss, this time to the hands of the #4 NC State Wolfpack (25-6, 11-4). The now sit at 20-11 on the season and are 6-9 in the ACC, ahead of only Wake Forest and Notre Dame in the Atlantic Division standings.

In the 12 games before ACC play kicked off, Louisville went 12-0 and averaged 9.25 runs per game while allowing only 3.42 runs per game. Since then, the Cards have gone 8-11, averaging 5.05 runs per game and allowing 5.47 runs per game during that stretch. With having such an easy schedule to begin the year, statistically speaking some regression was bound to happen once they started facing stiffer competition, especially since the team is so young.

However, this team at times has failed to execute even the basics. Pitchers losing command and giving up walks, poor base running leading to getting picked off or caught stealing, stranding runners in scoring position, and getting into early deficits way too often have been common themes throughout the season for the Cards.

Defense has also been subpar at times (193rd in fielding percentage), especially during ACC play. They committed on average 1 error per game in the 12 games before ACC play, and have committed 1.32 errors per game since ACC play started. That doesn’t seem like a huge leap, but they had only 3 multi-error games before conference play started, and have had 7 multi-error games since ACC play kicked off (3 of those 7 games featuring a whopping 3 errors). If Louisville is going to have any sort of turnaround in the second half of the ACC schedule, it needs to happen quick.

It’s not all doom and gloom for the team though. Adam Wolf has been a Friday mainstay for the Cards, with a 4-2 record and 2.28 ERA over 47.1 innings pitched. Nick Bennett has returned to form and made his way back to the starting rotation after beginning the season out of the bullpen. Logan Wyatt has made a significant leap in his progression as a hitter, leading the team in hits and RBIs, and posting a slash line of .345/.497/.545 with an OPS of 1.042. If all these young pieces can weather the storm for this season, they’ll form a fine baseball squad over the next 1-2 seasons.

Up next on the ledger for the Cards, they’ll get a bit of a break from playing marquee opponents. Opening the week for the midweek game, they’ll face the Northern Kentucky Norse (7-20) at home, and then take a road trip to face the Virginia Tech Hokies (13-17, 6-9).

Louisville will start the week at home for a midweek game then hit the road for Blacksburg, VA for a road weekend series.

No disrespect to the Norse, but Northern Kentucky is just not a very good baseball team. Outside of power threats in outfielder Jake Richmond and catcher Will Haueter (8 and 7 home runs on the season respectively, both of which rank in the top 100), NKU poses no real viable threat to defeat the Cards. Keeps walks in check before Richmond and Haueter come up to bat, and Louisville should be sitting pretty.

The Hokies have a hard time holding a candle to all the ACC powerhouses Louisvile has played so far this season. Stats on both the hitting and pitching side don’t particularly jump off the page, with the exception of strikeouts per nine innings. Virginia Tech does have four position players with a batting average over .300, but doesn’t have a single pitcher (starter or reliever) with an ERA lower than 3.20. If Louisville can continue to draw walks at the pace they been all season and deliver with runners on base, they should be in good shape for the series.

My prediction for the week is that after the Cardinal Nine take care of business at home against NKU, they will finally break their ACC series losing streak and win two games out of three in Blacksburg, VA against Virginia Tech.