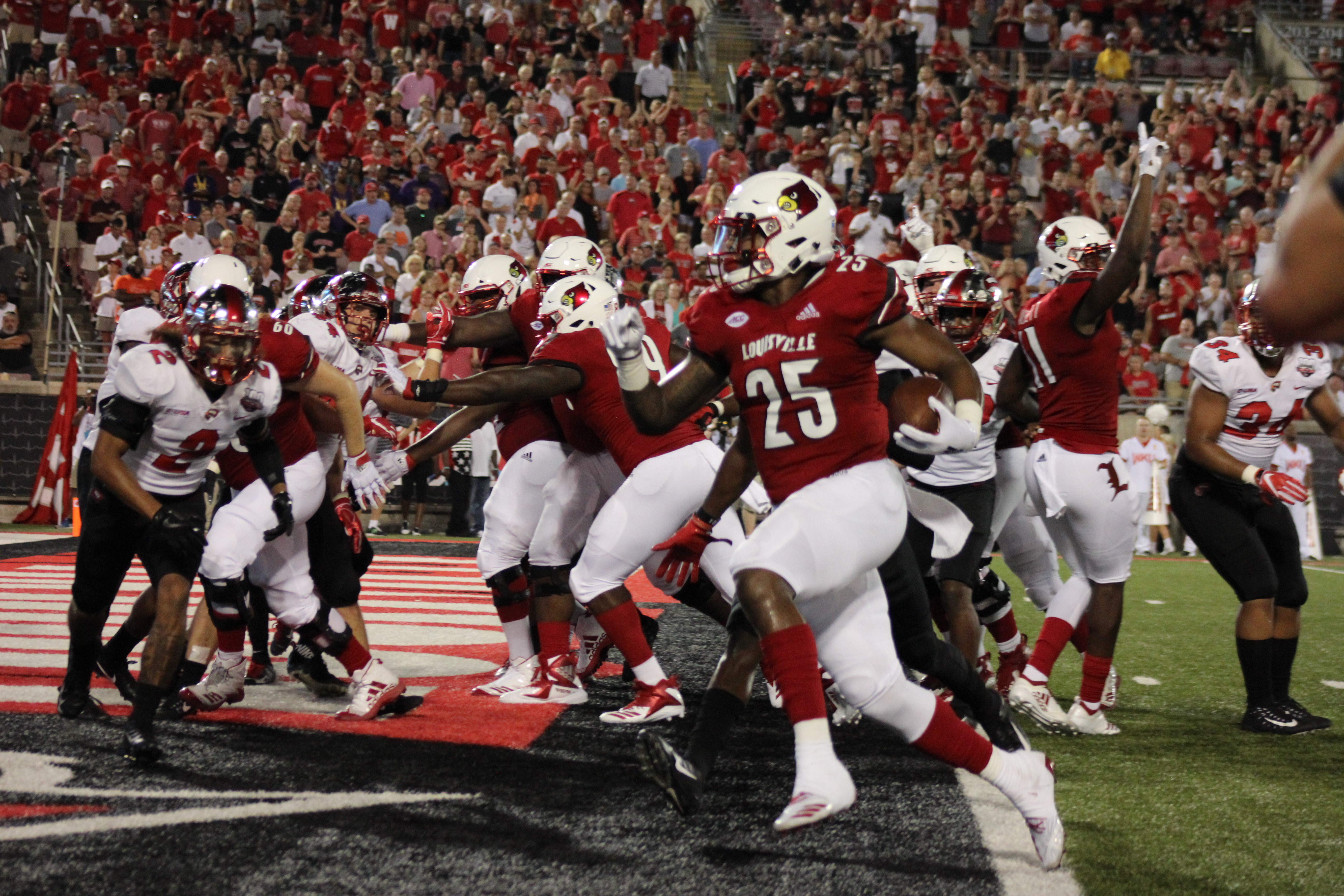 Good day CardNation! In keeping up with a tradition that literally no one asked for, I am back once again to answer questions regarding Louisville football’s upcoming season..

Today marks 30 days from our kickoff against Notre Dame on Labor Day. To say a lot has changed in the last eight months is an understatement. Let’s see:

Look the fact of the matter is when this team takes the field in 30 days they will look a lot different from the schemes, to the personnel. That being said, I present to you some questions that we hope to have answered this season.

As I have said the last few years that I have done this, these are strictly my thoughts and I am taking a friggin’ shot in the dark like most of you. I am not going to pretend I know what the hell I am talking about and I am sure one of you are already chomping at the bit to “well actually” me.  So that is why I include this disclaimer, cover your a** folks.

Will Louisville improve at all following a disastrous 2-10 season?

Technically they began improving when the fired Bobby Petrino and his trusty sidekick Andy. They also improved drastically when they decided to cut ties with Petrino’s son Nick Petrino and both son-in-law’s L.D. Scott and Ryan Beard. Vince Tyra brought in an energetic staff that is used to winning football games and building a winning culture.

While it may be another year or so before that translates into wins, the groundwork has already been laid for the program going forward. Coach Scott Satterfield and his staff have injected new life into a program that was pronounced clinically dead midway through last season.

Countless times, the fans were left poking Louisville with a stick to see if there was any movement . In my opinion, Louisville will improve in a lot of areas and can hopefully steal some games on its way to regaining its respect.

Is Scott Satterfield ready for this?

Most concerns are if Coach Scott Satterfield is ready for a major jump in competition. The ACC is not the Sun Belt and we won’t be playing the likes of South Alabama and Texas State on a given weekend. And that is not a knock on those programs, but they are far from the Clemson’s and the Miami’s of the world.

But, each time a Satterfield led team has stepped up in competition they have almost pulled off major upsets. In 2016, they pushed a nationally ranked Tennessee team to the brink in Neyland Stadium. In 2018, they nearly ruined a season opening game for a highly ranked Penn State team in Happy Valley of all places. Satterfield did all of this without a highly ranked class. That tells me two things. One, this guy can coach up his team and two we may have found a coach who eventually will challenge Clemson each season for the Atlantic division crown. Time will tell, but all signs point to Satterfield being the right guy.

Who has the most to prove on defense?

As my doctor told me back in 2007 when I went for my yearly physical after a summer of heavy drinking, little sleep, and horrible eating habits:

There is bad defense, then there is what Louisville’s defense did in 2018. It wasn’t a matter of if the other team would score, it was how much would they put up by halftime. Out of 12 games, the Cardinal defense allowed over 50 points in 7 of them. SEVEN.

For 58% of the season the Cards were getting destroyed. For those of you keeping track, they were outscored 529-237 last season. While the defense took the brunt of criticism, the former defensive coordinator has already landed another gig (yes, you read that right). This group is now under the guidance of Brian Brown who has overseen some highly ranked defenses in college football. The only way to go is up.

Who has the most to prove on offense?

Puma Pass hands down. After being given the reins to the offense last season and playing a decent game against Alabama, Pass was poised to be the next great QB out of Louisville. The next week his head coach had him throwing the football in a driving rainstorm. A few weeks after that he was asked to pass the ball when everyone in the 502 area code knew it should have been a run play. Confidence was a problem for Pass last year who struggled at times and was either yanked or replaced in the majority of the games played. Frank Ponce and the staff have done a good job building Pass back up and rumor has it that we will see improved play from Puma this season.

What newcomer are you excited to see?

I don’t show nearly enough love to the offensive line so I am going to say TJ McCoy is my pick here. The grad transfer out of Florida will compete for the starting center position on Dewayne Ledford’s line. There is a chance he could come on and help bolster a line that battled injuries last season.

I also like Aidan Robbins, the former Manual high school running back.

What returning player(s) are you excited to see?

There is still a ton of talent on this team, do not be fooled. Seth Dawkins and Dez Fitzpatrick return. Both are considered to be Louisville’s best downfield threats. Tutu Atwell, Keion Wakefield, and Josh Johnson will help propel the slot receiver position.

I am excited to see Robert Hicks, Russ Yeast, Rodjay Burns, CJ Avery, and Amonte Caban on defense along with a healthy Jared Goldwire. Hassan Hall and Javian Hawkins could each become 1,000 yard backs if all goes as planned. Satterfield is known for his run heavy offense so both could have the potential for a breakout season.

Will fans come out to support this team?

There will always be a portion of fans that claim to be die-hard fans but once adversity strikes they normally are the first to bail. When Louisville is winning they are the loudest, most boisterous fans you will ever meet. When Louisville loses and the bandwagon begins to empty, it looks a lot like this scene from The Office:

Vince Tyra and Lottie Stockwell have done a good job of not only listening to the fanbase but also making the game day atmosphere more fan friendly than it has ever been. I am not going to take this time to bash the old administration, but it appears Tyra felt that the fans deserved to be rewarded after a tumultuous 3 years of non-stop negativity and staff turmoil. Winning cures all and while there may be a dip in attendance this season, if Satterfield can turn things around soon I expect that to change.

Will the 3rd down music finally change?

No. I have zero faith in the sound team that it will change. Sure it may change for one game or so but I am sure by the EKU game I will hear that damn piano riff playing while Louisville faces a crucial third down. Change my mind.

Where are some prime tailgating spots to check out before the game?

Besides the purple lot (formerly the green lot) there always seems to be prime tailgating experiences off of Central Ave. There is a a nice contingent of fans who typically set up on both sides of the street. Traffic getting in and out is going to be a beast but you can always just bring the grill and cornhole back out and wait for things to die down.

Also, it would be a sin not to mention the fine folks over at Red Rage Tailgate, and Collision Course Crew. While a donation is not required, you can always feel free to drop them a few bucks to go towards food and drinks. It costs nothing to show up and have a good time. RRTG can be found at the old Cardinal stadium lot while Collision Course is typically set up across from Cardinal HOF cafe. If that has changed, my apologies.

Will Louisville’s fortune in the annual “blackout” game change?

Its no secret the last few blackout games have not gone as planned. The last time Louisville won a blackout game was 2016 when they defeated Duke. That was a game they hit snooze button through until the final quarter when they were finally able to put the Blue Devils away. The last two blackout games were decided by the 3rd quarter. Cover your eyes kids

The next installment is 30 days from today against Notre Dame. While most people expect a loss, I will say that the last time Louisville held a blackout on Labor day it worked out pretty well in their favor.

Any reason for optimism?

A lot of people make the claim that there in no talent on this team which is the furthest thing from the truth. Before Bob and family decided to go all “Peter from Office Space” on us and check out after the month of September they actually landed two back to back top 40 recruiting classes. In 2017 the Cards ranked 34th overall in recruiting and in 2018 they were 30th. Most of those guys are still here and this is far better talent than what Satterfield had at Appalachain State. That coupled with his coaching success should translate into wins sooner rather than later.

Any cause for concern?

New schemes, new personnel, new direction. That is always cause for anxiety. We are all hoping that we have found a coach that will propel us to the CFP and not the next Kragthorpe that will have us joining a book club and carrying baseball bats around in a non-violent way.

What is the best/worst case scenario?

Best case scenario, Louisville wins the games it should and steals a few it shouldn’t . They head to Lexington in November already exceeding expectations and with a bowl bid already secured meaning they can play as loose as they want. This bolsters recruiting even more and the Cards land their highest ranked class in school history. Satterfield gets a raise, Jawon Pass wins most improved player, and Hassan Hall is a finalist for the Doak Walker award. The defense finishes in the top ten national rankings in nearly every category.

Worst case scenario, Satterfield gets a wake up call early and loses his first game in embarrassing fashion. Fans freak out and stop coming to games and we have another year of blowouts. Louisville is out of bowl contention by the end of October and all the attention turns to basketball. The NCAA vacates the party deck because it promotes fun and they can’t find a way to make money from it.

I have been on record and will continue to be on record as saying this team will be improved but still a year away. I am going to stick with my 5 win prediction. I see 5-7 this season but it can EASILY be 6-6 or better. Right now there are too many question marks with this team and I want to play it safe.

While I will miss us being in a bowl for the second straight year, as long as there is visible improvement on all sides of the ball I will be pleased. My predictions are normally wrong so hopefully the team wins them all.

See you in a few weeks.