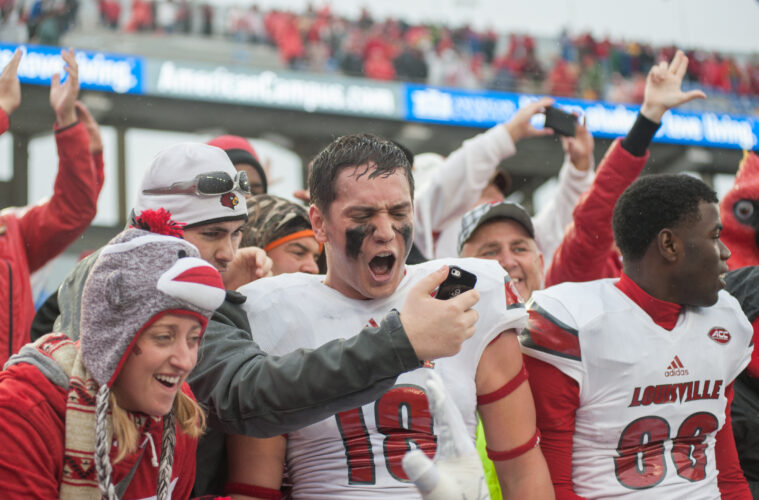 If Louisville has anything at all….it’s Tight Ends. And those tight ends have talent to match their experience, but the player who is set to BREAK OUT is clearly Cole Hikutini. In 2015 Cole became more involved in the offense week by week while struggling with injuries during his first season of major college football. In the end Cole finished with 19 catches for 348 yards (18.32 yards per catch!) and 3 TDs.  This Fall Camp, Cole is Lamar Jackson’s FAVORITE target as Lamar not only looks at the tight end position more often than ever, but also because he’s looking to get the ball to one of the Cards main play-makers.  Hikutini could easily TRIPLE his production in 2016 and should be a major weapon for UofL Football.  Cole runs great routes has soft hands and can high point the football extremely well for a 248 pounder.  He’s a bigtime mis-match for linebackers, safeties or cornerbacks and can use his size and/or speed depending on the defender who lines up opposite him.  Cole must remain healthy.

The injury bug hit senior Keith Towbridge the last two off-seasons.  The same injury that sidelined DeVante Parker in his senior year at UofL & rookie year with the Miami Dolphins has affected Keith.  Towbridge came to camp a little late last summer while recovering and missed this Spring while having some corrective surgery.  BUT KEITH LOOKS LIKE HE’S GOING TO HAVE HIS BEST YEAR TO DATE in 2016.  Towbridge was extremely active in the open practices we were able to observe during Fall Camp and is looking to build on how he finished the 2015 season.  Towbridge had 10 receptions for 154 yards and 3 TDs (all 3 TDs occurred in the final 5 games of the season) last year.  The Touchdown flurry at the end of the season was a big deal because Towbridge had previously really established himself as a great blocking tight end and a MAJOR hustle on special teams.  Lamar Jackson looking for the tight end much more often is also going to greatly influence Keith’s impact in his Senior season.

Honestly it’s difficult for me differentiate between Micky Crum & Charles Standberry.   Both players bring a little something different to the position so situation may dictate who gets the call.

Charles Standberry may never forget the easiest TD reception of his career against NC State last year.  Charles only had 6 receptions as a sophomore for 71 yards. Standberry clearly is more talented than those numbers.  There was some thought that Charles would cut weight (he went from 231 lbs as a freshman to 226 lbs as a sophomore) and play Wide Receiver for the Cards in 2015.  That plan didn’t materialize and now in 2016 Standberry is now 242 lbs and for the 1st time has a body that can legitimately play Tight End in the ACC.  How will that impact his effectiveness on the field?  Standberry is clearly a Bobby Petrino favorite as he’s gotten more compliments from his head coach than he has career receptions (13).  We know that Charles has talent….we’d like to see him use it all this season.

Fans could barely contain their excitement for Micky Crum‘s freshman year in 2015. Micky had some incredible moments in his first year on the field for the Cards as a receiving threat, while blocking and also in special teams.  Crum has LEGIT athleticism and a mean streak to match but he must play with greater consistency as a sophomore.  Also the freshman tight end was suspended for the Wake Forest game (Cards barely won 20-19 in Winston-Salem) and the Cards could have used his explosion in a game that UofL only gained 317 yards.  So we’d certainly like to have a season where UofL could rely on its talented tight end to be available (if not injured) for each game in 2016.

Incoming freshman Austin Cummins has been described as “Country Strong” at 6’5, 225 and several coaches at Signing Day mentioned that Austin has never formally been in a strength & conditioning program.  It’s also been speculated that Cummins’ frame might be able to add muscle and weight quickly and eventually necessitate a move to the Offensive Line (ala Breno Giacomini).  More than Likely Austin redshirts the 2016 season. Additionally Tight End Jordan Davis has transferred to UofL from Texas A&M and looks like he’ll factor next season.